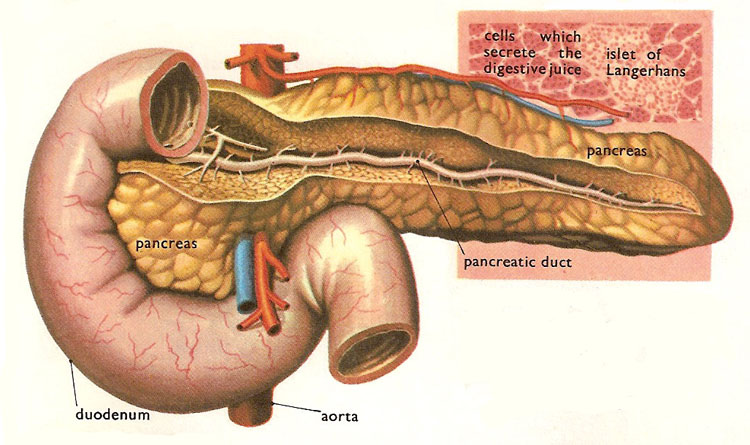 When the pancreas is infected with parasites, e.g. worms, it won’t be able to produce enough insulin to completely synthesize the food we’ve taken and we will be losing the energy that our body critically needs.

Every system in our body needs energy to be able to perform properly, and if the pancreas won’t be able to do its critical function then the whole body could suffer from further infections.

The pancreas is also producing its own supply of sodium bicarbonate to regulate acidity. High acidity is present in every cancer patient.

The Pancreas, Bicarbonate and Diabetes

Bicarbonate physiology is entirely ignored in diabetes as it is in oncology though a wide range of clinicians use sodium bicarbonate for a host of medical problems. Who would stop long enough to think deeply enough to make the connection between acid producing diets (junk foods) and destruction of the pancreas after decades of obsessing with sugar as the main culprit?

Understanding of the use of sodium bicarbonate begins with a trip to the pancreas, which is the organ most responsible for producing the bicarbonate our bodies need. The pancreas is a long, narrow gland which stretches from the spleen to about the middle of the duodenum. It has three main functions. Firstly, it is to provide digestive juices, which contain pancreatic enzymes in an alkaline solution to provide the right conditions for the digestive process to be completed in the small intestines. Secondly, the pancreas produces insulin, the hormone which controls blood sugar by the metabolism of sugar and other carbohydrates. Thirdly, it produces bicarbonate to neutralize acids coming from the stomach to provide the right environment for the pancreatic enzymes to be effective.

Allergies generally start with the body’s inability to produce a certain enzyme, or to produce enough enzymes for the digestive process to work effectively. In conjunction with this is an inability to produce enough bicarbonate essential for the pancreatic enzymes to function properly. When this happens undigested proteins penetrate the bloodstream inducing more allergic reactions. Inflammation in such a scenario is systemic but can focus on the pancreas forcing decreases in the production of bicarbonate, insulin and necessary enzymes. [1]

The bicarbonate ion acts as a buffer to maintain the normal levels of acidity (pH) in blood and other fluids in the body. Bicarbonate levels are measured to monitor the acidity of the blood and body fluids. The acidity is affected by foods or medications that we ingest and the function of the kidneys and lungs. The chemical notation for bicarbonate on most lab reports is HCO3- or represented as the concentration of carbon dioxide (CO2).

The normal serum range for bicarbonate is 22-30 mmol/L. A bicarbonate test is usually performed along with tests for other blood electrolytes. Disruptions in normal bicarbonate levels may be due to diseases that interfere with respiratory function, kidney diseases, metabolic conditions and a failing pancreas.The pancreas, an organ largely responsible for pH control,[2] is one of the first organs affected when general pH shifts to the acidic. “Monitoring of blood-sugar levels, insulin production, acid-base balance, and pancreatic bicarbonate and enzyme production before and after test exposures to potentially allergic substances reveals that the pancreas is the first organ to develop inhibited function from varied stresses,[3] writes Dr. William Philpott and Dr. Dwight K. Kalita in their book Brain Allergies.

Dr. Robert Young, states, “Excess acidity is a condition that weakens all body systems. The pancreas is one of our body’s organs charged with the awesome responsibility to “alkalinize” us. Can you start to see how our serious acidosis has overwhelmed our pancreas’ ability to operate effectively, which then results in a state called “diabetes?”

When one of many possible biological stresses weigh down on the pancreas it will, as any other organ will, begin to function improperly. When this happens the first thing we will see is a reduction in pancreatic bicarbonate production. Once there is an inhibition of pancreatic function and pancreatic bicarbonate flow there naturally follows a chain reaction of inflammatory reactions throughout the body. The reactions would include the brain as acidic conditions begin to generally prevail. Decreasing bicarbonate flow would boomerang hardest right back on the pancreas, which itself needs proper alkaline conditions to provide the full amount of bicarbonate necessary for the body.

A highly acidic pH level puts the pancreas, liver, and all the body’s organs at risk. Because of the important role played by the liver in removing acid waste from the body, liver function is also particularly at risk when acids accumulate. When acidity prevents the liver and pancreas from regulating blood sugar, the risk of diabetes and thus cancer increases.

There are many causes of diabetes. Heavy metals, toxic chemicals and radiation contamination will affect, weaken and destroy pancreatic tissues. When the body is bicarbonate sufficient it is more capable of resisting the toxicity of chemical insults. That is why the army suggests its use to protect the kidneys from radiological contamination.[4] Much the same can be said for magnesium levels. Magnesium, bicarbonate and iodine all protect us from the constant assault of noxious chemicals and radiation exposure we are subjected to everyday in our water, food and air.

The Centers of Disease Control (CDC) in Atlanta declares that  33% of the babies born this year will be diabetic by the year 2050. – Dr. Alan Cantwell

Diabetes, which is expanding rapidly, can in part be traced to the increasing radiation to which we are all being exposed. Every physician knows that radiation can lead to cancer, but making a connection between depleted uranium (DU), for example, and diabetes seems ludicrous at first glance but is not. Most medical doctors have never heard of this but neither have they paid attention to the fact that mercury and other toxic chemicals are also primary causes of diabetes.

Diabetes is a fundamental disease that affects the entire colony  of cells in a person because it has to do with energy metabolism  and the vastly important hormone insulin and its receptor sites.

Diabetes is actually an extremely serious warning to civilization; it is an announcement that the rising tide of radiation, mercury, other deadly chemicals and pharmaceutical drugs are poisoning humanity. We even have to look at how antibiotics are leading to diabetes as well as a host of other problems for the human body. These toxic insults are slamming head on to nutritional deficiencies in the body and the results are telling though still being ignored by the orthodox medical establishment, which has its heart dead set on adding not subtracting to these insults

Dr. Lisa Landymore-Lim in her book Poisonous Prescriptions explains how many drugs used by the unsuspecting public today, are involved in the onset of impaired glucose control and diabetes.  She explains using the example of the drugs streptozocin and alloxan, which are both used in research to make lab rats diabetic. Vacor is a rat poison known to cause insulin dependent diabetes in humans. Allopathic medicine will eventually have to face up to the fact that many drugs, including most surprisingly, the antibiotics including penicillin, as well as an entire host of others, causes changes in the beta cells affecting both insulin and bicarbonate production.