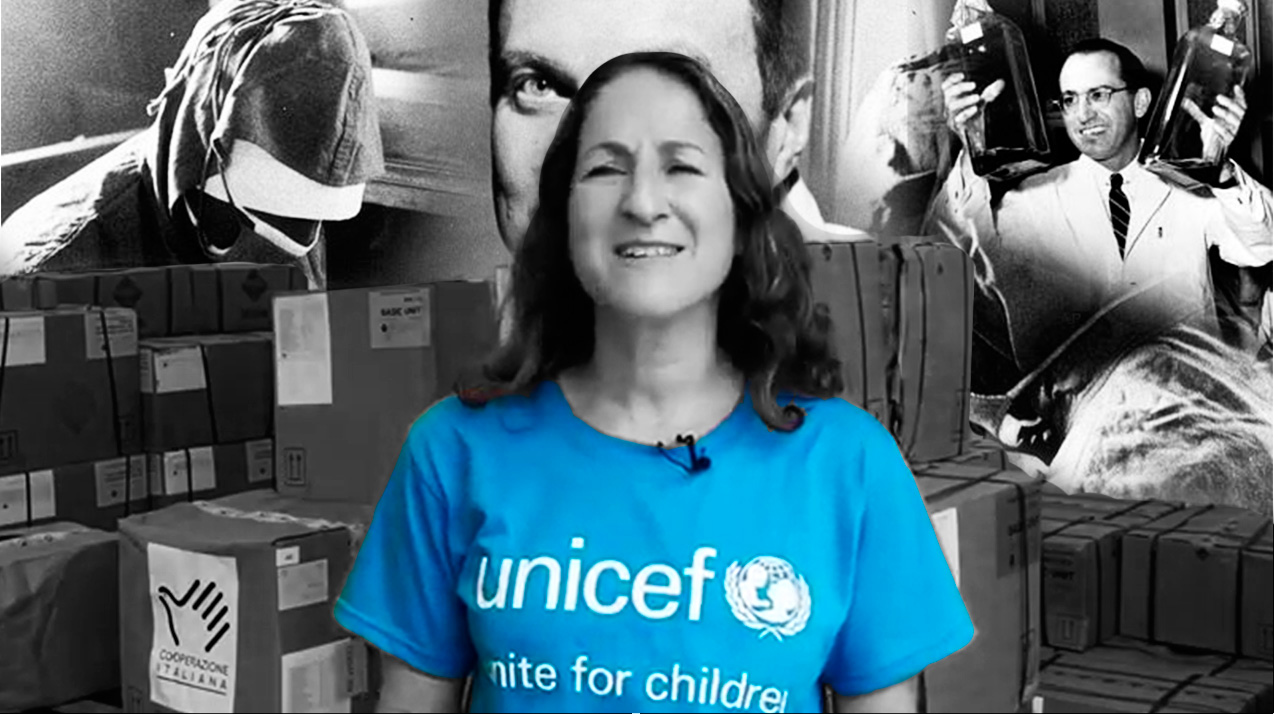 It’s never enough that they have killed 30 thousands [and counting] of my countrymen, they now are injecting unnecessary polio vaccines to the survivors of HAARP.

This is happening in spite of the fact that polio has been eradicated long time ago in this part of the world.

So, even if the vaccine hoax is over, the madmen at the UN-WHO-UNICEF are still at it. One “Bonesman” even died trying to inform the world about the dangers and the real reason why they’re doing it.

Walker’s death and those of others may not be in vain for too many across the world have awakened to the madness as the sheer number of FB shares this single article have garnered while we were knocked out from the internet for the last two weeks, i.e. 60,000+ page views and 10k+ FB shares! 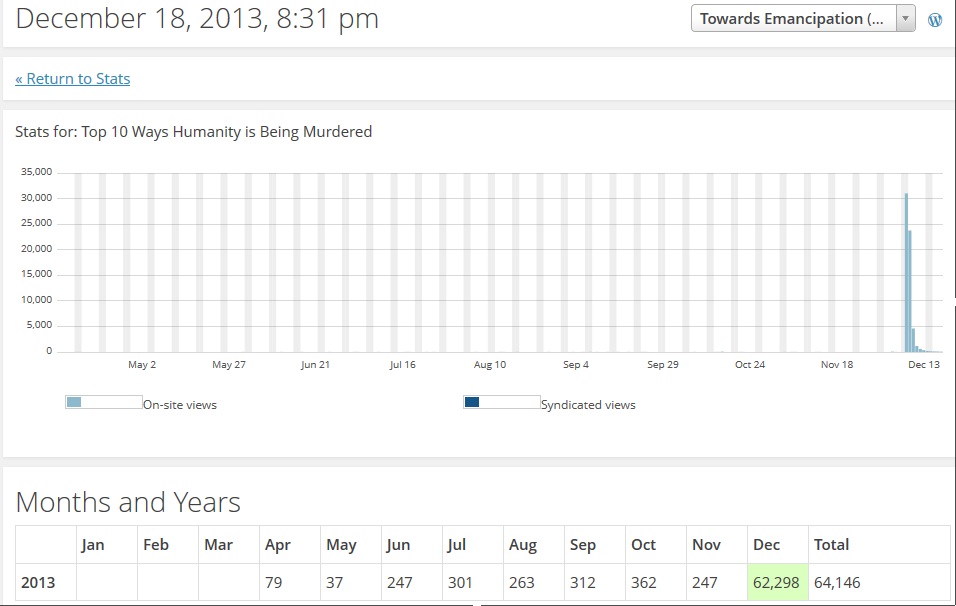 No Polio in the Philippines Since 1993, But Mass Polio Vaccination Program Targeted for 500,000 Typhoon Victims Under Age 5

UNICEF has purchased over $2 million dollars worth of vaccines for typhoon victims in the Philippines. Western pharmaceutical companies look to make huge sales from aggressive campaign to vaccinate over 500,000 children in typhoon affected areas.
Photo by World Health Organization.

In the aftermath of one of the strongest storms to ever strike land, the most dangerous place for children in the Philippines to be right now could very well be the evacuation centers, or living near one.

This past week, the World Health Organization (WHO) and UNICEF began an aggressive program to vaccinate more than 500,000 children with the measles and polio vaccines in the typhoon affected areas of the Philippines. They have already vaccinated more than 30,000 children in Tacolban, one of the worst hit areas.

“It is virtually unprecedented that within two and a half weeks of a disaster of this scale, with this level of devastation and these logistical challenges, that a mass vaccination campaign is already rolling out,” reported Dr. Julie Hall, WHO representative in the Philippines.

The children are being vaccinated for measles and polio, in spite of the fact that measles rates are very low and declining in the Philippines, and that there has not been a single case of polio in the Philippines since 1993.

In the video below, Heather Papowitz, a senior advisor for UNICEF, states that they are vaccinating children for measles even though they have already been vaccinated for the disease, because previous vaccine campaigns were,  ”not enough to protect them, so we need to get them vaccinated as soon as possible.”

Is this a statement to the ineffectiveness of measles vaccines that they need to be vaccinated repeatedly, or that somehow typhoon disasters like this require higher doses of the vaccine? By either reasoning, it allows pharmaceutical companies a larger market for their products.

Regarding their goal to vaccinate 500,000 children with the very dangerous oral polio vaccine, she states, “As far as polio, it was already eradicated in the Philippines, so we just want to make sure it doesn’t come back.”

Watch the video for yourself:

If you are the parent of a Filipino child being told by western aid workers that you need to vaccinate your child for measles (regardless if your child was already vaccinated), you need to ask yourself why you should allow your child to be exposed to dangerous western vaccines when the disease has already been declining and affects so very few people in your country.

As for the oral polio vaccine, this particular vaccine contains the live polio virus, and is notorious for causing vaccine-induced polio and paralysis. It is no longer given in the United States, only in poorer countries like India, Pakistan (where many people are now rising up and resisting it), and now the Philippines. Many have called for a halt on the oral live attenuated vaccine, due to the fact that it can actually cause polio and non-polio acute flaccid paralysis.

In India, for example, the “polio eradication campaign” using the live oral polio vaccine caused 47,500 cases of non-polio acute flaccid paralysis in just one year! (Source.) Will we now start seeing cases of polio and paralysis arise in the Philippines, where currently there are none, as a result of this dangerous and outdated polio vaccine that is targeted for 500,000 children? We most assuredly will, as this is exactly what is happening in other places like India and Pakistan. (See: Paralysis Haunts ‘Polio Free’ India and Confirmed: India’s Polio Eradication Campaign in 2011 Caused 47,500 Cases of Vaccine-Induced Polio Paralysis)

The measles vaccine is hardly without risk either. Dr. Viera Scheibner points out in this excellent article looking at the history of the measles vaccine, that atypical measles outbreaks have occurred as a result of the vaccine, and that natural immunity is wiped out when the vaccine is introduced, which can lead to more incidents of measles, rather than less. As I pointed out above, measles is already on the decline in the Philippines and affects a minuscule portion of the population.

I am not sure if there is a single measles vaccine currently available in the market, as by far the majority of the vaccines for measles today are a 3-vaccine combo of mumps, measles, and rubella (MMR). Here is Merck’s MMR vaccine package insert for the MMR vaccine. Be sure to read the ingredients, as well as the sections: CONTRAINDICATIONS, WARNINGS, PRECAUTIONS, and ADVERSE REACTIONS before you agree to have your children vaccinated. These sections are seldom communicated or explained to parents prior to vaccination, and injuries and deaths do occur, as is evidenced by settlements in the U.S. vaccine court, and also by a court in Italy. (See: MMR Vaccine Caused Autism in Two Children According to Federal Vaccine Court and Italian Court Rules MMR Vaccine Caused Autism: Why is this story blacked out of the US Media?)

I know that Health Impact News has a popular readership in Manila, and I encourage people to contact President Aquino and Dr. Enrique Ona (Secretary of Health) to carefully research this topic so they can be fully informed about these issues. The dangers of the live oral polio vaccine and the terrible side effects resulting in paralysis are very well documented in the scientific literature. We have also published articles from medical doctors and PhD scientists that summarize the peer-reviewed scientific studies and history of vaccines that is not popularly covered in the U.S. mainstream media, which is for the most part pro-pharmaceutical. See for example: The REAL History Behind the Polio Vaccine by Dr . Viera  Scheibner  (PhD), and Did Vaccines Really Eradicate Polio? by Suzanne Humphries, MD.

Why are Children Under 5 Dying in Countries Where UNICEF Works?

It would also be prudent to research UNICEF, which likes to present itself as an advocate for children’s health. Their track record does not match up to this image they like to project. In a report published in the Lancet (free registration required to read) in 2004, it was revealed that in the countries where UNICEF was working, deaths of children under the age of 5 actually increased! Is it a coincidence that this is the same age group UNICEF targets with their vaccine programs? The countries that experienced the greatest increase in deaths were all poor countries: India (2·4 million deaths), Nigeria (834 000 deaths), China (784 000 deaths), Pakistan (565 000 deaths), Democratic Republic of Congo (484 000 deaths), and Ethiopia (472 000 deaths). Will the Philippines now be added to this tragic list?

The largest funding entity to UNICEF is the U.S. Government. People in the Philippines and other poorer countries need to understand that the U.S. Government, unlike any other government in the world, has passed laws giving 100% legal immunity to pharmaceutical companies for any harm or damage that occurs as a result of vaccine adverse effects. This gives them unlimited opportunities to rush new vaccines into the market regardless of their safety, and often the more unpopular vaccines get distributed to poorer countries as part of “humanitarian” efforts, funded by taxpayers in various countries that support the U.N. and UNICEF. There are absolutely ZERO checks and balances to assure that your country is receiving safe and effective vaccines.

I lived in the Philippines for several years, and have been through four Super Typhoons. I have also participated in relief operations after natural and man-made disasters. The amount of fraud and corruption that occurs when millions, or even billions, of dollars are being donated for “humanitarian” purposes after a tragedy like this is always a problem, and this appears to me to be a case where pharmaceutical companies are seizing upon the Philippine Typhoon Yolanda tragedy to promote their vaccine agenda.

Pharmaceutical sales are slumping in the U.S., and they are looking for new markets, particularly in the poorer countries. Measles is declining in the Philippines and already rare, and there are no cases of polio. But that may all change now, thanks to this vaccination program that can, ironically, cause the disease for which the vaccine is supposed to prevent, resulting in even more vaccination programs in the future with the claim that these diseases are now returning, thus creating a lucrative market for the western pharmaceutical companies.

What the people in the Philippines in the typhoon affected areas need right now, especially children under the age of 5, is clean drinking water and healthy food, and then help to rebuild their homes and infrastructure. The millions of dollars being spent on dangerous vaccines could better be put to use for much healthier and safer options that will truly help the people, rather than dangerous vaccines that could end up crippling and injuring children at a time when they are most vulnerable.

Government officials and citizens in the Philippines need to understand the profit motive to distribute vaccines and how Western governments fund groups like WHO and UNICEF to promote their agendas in poorer countries. In the process, they exploit the most helpless members of your society, children under the age of 5! Throw off the mantle of Western colonialism and tell the WHO and UNICEF to stop their vaccination program in the typhoon affected areas now!

Please support us by downloading our Second Edition of Towards Healthcare Emancipation eBook. The proceeds from this book will be used to fund our next project, Towards Energy Emancipation.

The aim is to make the subject of free energy more understandable for the layman so that anybody could replicate and install his own power plant and be completely living off-grid.

If you haven’t done so, please like our FB page to encourage others to learn more about our work.

Thank you very much for your valuable support.

The REAL History Behind the Polio Vaccine

An Honest Look at the Historical Evidence that Vaccines Eliminated Diseases