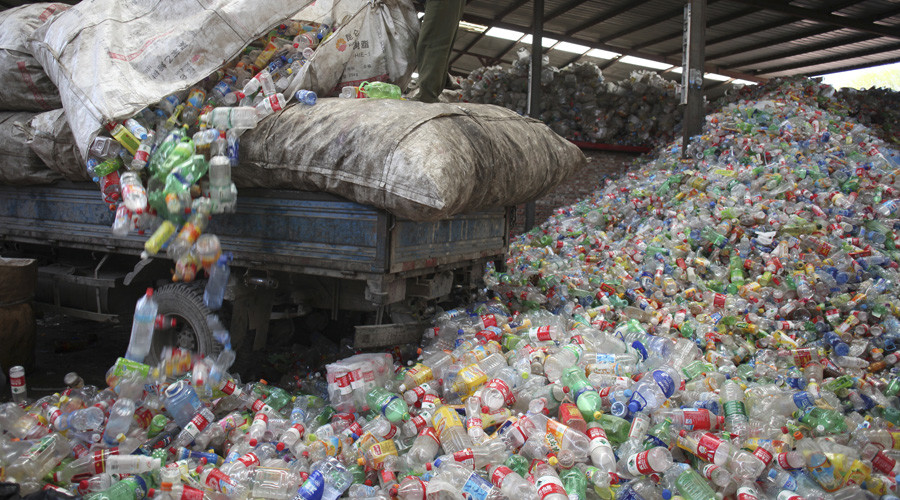 US scientists estimate a total of 8.3 billion tons (metric) of plastic have been produced over the course of history, enough to cover a country the size of Argentina, and a ton of plastic for every person on the planet.

In the first global study on the history of mass-produced plastics, researchers from the University of California, Santa Barbara, also found that half of the Earth’s plastic was produced in the past 13 years alone.

Although plastic is in widespread mass-production only since the 1950s, the study describes the rapid growth of its manufacturing as “extraordinary,” with plastic now far surpassing the production of many other-man made materials, with the exception of steel, cement, and brick.

Of all the plastics ever produced and discarded, the study states nearly 80 percent have ended up in landfill or as waste in the environment. Just 9 percent have been recycled and 12 percent incinerated.

The study predicts that, if current trends continue, there would be 12 billion tons of plastic waste by 2050, equivalent to one and a half times all the plastic produced throughout history to date.

Despite the historically low rate of plastic recycling at global level, it has increased in Europe and China, according to the study.

Unsurprisingly, plastic’s largest primary use is packaging, with a global shift from reusable to single-use containers greatly contributing to the increase in plastic production and waste.

While plastic used in packaging is usually short term – typically less than a year – plastics used in construction and building can last decades.

It’s the versatility and durability of plastic which has seen its mass-production expand so greatly, but the study explains it’s these same strengths which make it so difficult for the material to biodegrade.

“If you spread all of this plastic equally, ankle-deep, it would cover an area the size of Argentina,” Roland Geyer, a professor of industrial ecology and the study’s lead author, told the Thomson Reuters Foundation.

“It is an enormous amount of material that does not biodegrade … I am very worried.”

The study equates the world’s relationship with plastics to an uncontrolled experiment.

“Without a well-designed and tailor-made management strategy for end-of-life plastics, humans are conducting a singular uncontrolled experiment on a global scale, in which billions of metric tons of material will accumulate across all major terrestrial and aquatic ecosystems on the planet.”

In 2016, a separate report done by the Ellen MacArthur Foundation predicted that by 2050 there would be more plastic than fish in the sea.

Industrial waste will continue to be part of the current paradigm of endless production of goods which must fail at a predetermined period.

Embedded or planned obsolescence makes sure that the production sector continues to operate to provide employment, while making the entire industry profitable.

If the industry is forced to produce durable products to reduce wastage, that industry will eventually suspend its operation until a new batch is needed by the market.

The medical cartel is not expected to churn out medical products that can really cure cancer for good, that people won’t need another round of treatment for a very long time.

Certainly, that would hurt the bottomline.