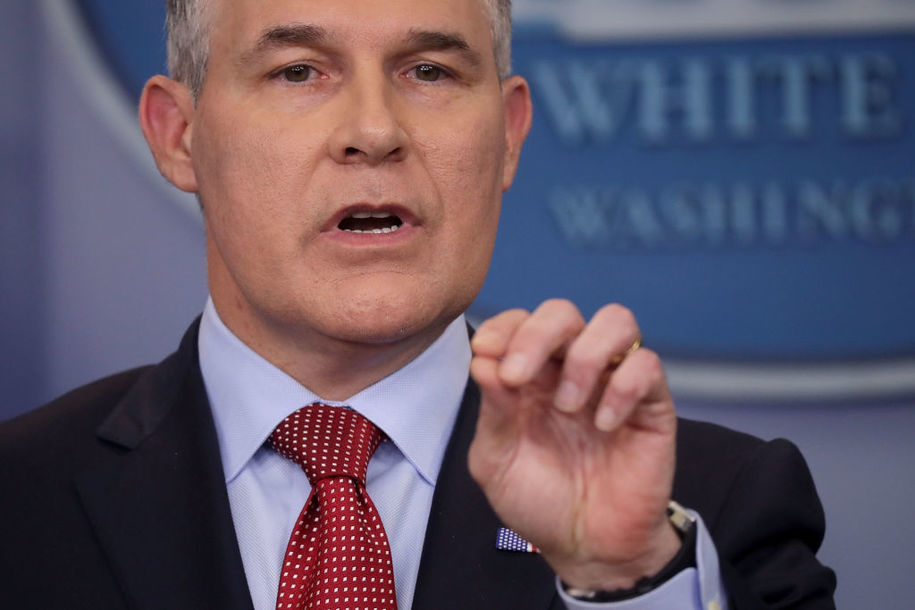 Donald Trump’s EPA is facing a tsunami of vitriol for trying to drain the DC swamp of rogue regulators that rule with made-to-order scientific lies and invented threats, such as its ruling that the carbon dioxide which makes life on Earth possible is a pollutant.

When President Trump proposed a $1.6 billion cut from EPA’s expected $8.1 billion budget, employee screams of doomsday intimidated Congress into forking over the full gimme-gimme. In response to the specter of lost jobs and less political power, entrenched Obama holdovers have organized to sabotage Trump’s reforms in what is being called the Deep State.

Fear is palpable throughout the EPA, where secret email accounts revealed serious abuses of power, where bureaucrats dictatorially took over virtually anything wet as “Waters of the United States,” including agricultural irrigation ditches and stock watering ponds (Trump revoked that rule), and where policies that destroyed the homes and lives of thousands have been routinely based on “liberal” interpretations of federal laws and scientific research that did not stand up to critical scrutiny.

The fear evidently touched EPA “Scientific Integrity Official” Francesca Grifo, an Obama appointee who previously oversaw the “scientific integrity program at the Union of Concerned Scientists (“an oxymoron if there ever was one,” said Forbes magazine). She postponed this year’s meeting of EPA’s scientific integrity “stakeholders” when she found out that her faithful corps of environmental activist advisors was to be joined by independent scientists approved by EPA Administrator Scott Pruitt.

The Grifo flap and other Environmental Protection Agency problems masked a much bigger government science outrage: the $315 million scandal engulfing the U.S. Department of Health and Human Services (HHS). This scandal further underscores why Trump’s reforms are necessary.

In March, the House Science, Space and Technology Committee probed into HHS’s National Institutes of Health (NIH) and the $315 million in taxpayer-funded grants awarded since 1985 to the Italian research group Ramazzini Institute. The organization is an “independent” science academy focused on cancer research into commercial products. Its output had become the subject of controversy for its fixation on “scaremongering about chemicals, artificial sweeteners and other products.”

Ramazzini’s early claim that sweetener aspartame was carcinogenic was widely panned by the European Food Safety Authority, the U.S. Food and Drug Administration (FDA), and the Italian media. Its 2016 claim that sucralose (Splenda) was linked to cancer brought similar reactions. Not surprisingly, government and scientific bodies around the world have long criticized it for using secretive, questionable science to reach politically motivated conclusions.

The question remains: Who opened America’s public coffers – mostly without competitive bidding – for Ramazzini and its New York-based affiliate Collegium Ramazzini, the advocacy cooperative of scientists and researchers in the grant-gobbling Ramazzini circle?

Since toxicologist-microbiologist Linda Birnbaum became director of both in 2009, the two agencies provided $92 million, one third of Collegium members’ support. She herself is a Collegium member. A knowledgeable source says she got the NIEHS-NTP appointment largely because she was willing to expand the agency’s mission to include the health effects of climate change, while the other candidate for her job was not.

According to public records, Birnbaum’s NIEHS contracted with Ramazzini and its affiliates – through multiple third parties – muddying it up what services were rendered under these contracts and how they were prearranged.

Another Ramazzini fellow, Dr. Christopher Portier, a senior collaborating  scientist for the anti-pesticide Environmental Defense Fund, and a well-known anti-glyphosate activist, worked for an HHS agency for 32 years. He initiated a reportclaiming the common weed killer glyphosate (used in Roundup herbicides) is carcinogenic. It was the only study among many that made this assertion, but activists used it to call for banning Roundup, which is often used in conjunction with genetically engineered crops to eliminate the need for weeding and tilling, thereby reducing erosion.

The House Science, Space and Technology Committee continues to probe the Ramazzini morass. Backed by Oversight Subcommittee Chairman Darin LaHood (R-Ill.), Chairman Lamar Smith (R-Texas) is following up on a joint letter to HHS Secretary Tom Price, requesting documents and correspondence between Ramazzini and the National Institutes of Health (NIH).

The letter noted that Birnbaum’s NIEHS “has refused to respond to [FOIA] requests seeking information related to contracts between your Department, including NIH and NEIHS, and Ramazzini.” A source familiar with the issue says a dialogue was established and is progressing.

The controversies are likely to heat up in the face of news stories saying that Aaron Blair, the scientist who led IARC’s review of glyphosate risks, deliberately withheld findings from studies of 89,000 U.S. farm workers and family members, concluding that there was no link between cancer and exposure to the chemical. Under Blair’s direction, while he and his team for years apparently ignored evidence that contradicted that conclusion, IARC found that the weed killer was “probably carcinogenic.”

Collegium Ramazzini strongly rebuts any assault on its integrity and infallibility. Its website says its mission “is to be a bridge between the world of scientific discovery and the social and political centers which must act on the discoveries of science to protect public health.” Is this self-congratulation, a power ploy – or a subtle warning to anyone who might question its funding arrangements?

In his 1961 farewell address, President Dwight Eisenhower warned against the military-industrial complex and included this important final caveat:

“In holding scientific research and discovery in respect, as we should, we must also be alert to the danger that public policy could itself become the captive of a scientific-technological elite.”

Can the Trump Administration or Congress untangle today’s web of the scientific-technological elite and, more importantly, prevent our health and agricultural policies from being driven by dubious science, unfounded fears, deliberately withheld studies, and serious potential conflicts of interest?

It would take more than plowing through mountains of paper. We would learn a lot more from public testimony taken under oath.