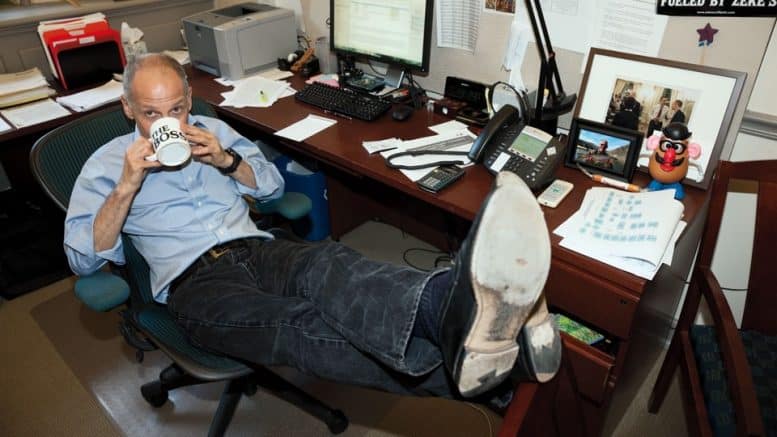 Technocrats like the Emanuel brothers operate within both political parties, not because they are Democrat or Republican, but because the political machinery allows them to perpetuate themselves and their policies. ⁃ TN Editor

If Joe Biden is elected president in November, oncologist and bioethicist Ezekiel Emanuel, the former vice president’s chief campaign health-care adviser, will almost certainly control the new administration’s health policies, perhaps even as secretary of health and human services. That is bad news. Emanuel was a prime architect of the Affordable Care Act, or Obamacare, and remains one of the law’s most enthusiastic apologists. Readers may also recall his infamous 2014 article in The Atlantic, where he wrote that he wants to die at age 75 — implying that we should too — because people after that age become “feeble, ineffectual, even pathetic.”

That ageist piece is the least of it. More worryingly, Emanuel is a technocrat’s technocrat who believes that the government that governs health care most governs it best. Toward that end, he wants to erect an all-encompassing medical technocracy in which the federal government, as decided by “experts,” dictates universal standards of care, establishes prices of physician and institutional compensation, and forces doctors and other health-care professionals to provide controversial services to which they are religiously or conscientiously opposed.

This is not a matter of conjecture. During his long career, Emanuel has been personally involved in, or opined about, the most important health-care controversies of our times — meaning that one need not have prophetic powers to discern the policies he would impose on the country.

Emanuel clearly believes in single-payer health care. Yes, he has expressed “doubts” about current Medicare for All proposals — while claiming that “unaffordability is not a reason to oppose it.” And it is true that Obamacare’s centralization of our health-care system that he helped gestate maintained a quasi-market approach.

But do not be fooled. Back in 2009, in an interview with PBS, Emanuel proposed a federal voucher system that would replace employer, union, or private individual polices with coverage determined by the federal government:

Our proposal is for universal healthcare vouchers. It’s a plan where everybody in America gets a voucher to buy health insurance from an insurance company or health plan or a managed care organization. And they get a basic benefits package. If they want to buy more, . . . they can pay more and they can buy up.

“Basic benefits packages” sounds constrained. But as we saw with Obamacare, required “basics” can easily balloon or be wielded as a cudgel to force social change — as in trying to force Catholic nuns to pay for contraception.

It is also worth noting that Emanuel allowed no means of escaping the federal voucher system, telling the interviewer that “every insurance company would, to participate [i.e., to enroll purchasers], be required to take the voucher.” Predictably, he also envisioned a bureaucratic “national health board” to determine premiums that “the 50 or 60 plans [remaining] throughout the country” could charge.

Emanuel has extolled Obamacare’s Independent Payment Advisory Board (IPAB), describing it as “a group of smart men and women who know about health care” and issue Medicare cost-controlling “recommendations that have to go into effect unless Congress votes no.” In reality, IPAB was much more powerful than that, and indeed, perhaps the most dangerously technocratic system ever enacted in American history. Perhaps that is why it was repealed in 2018 by a bipartisan vote.

Even though IPAB is dead, it is worth reviewing the extra-constitutional powers with which it was endowed. The board’s “recommendations” would be more accurately described as mandates. When Medicare expenses were projected to rise above a given amount, IPAB was required to submit to Congress a cost-cutting proposal that, without change by House and Senate majority leaders, would be introduced as enabling legislation. Without a three-fifths majority (60 votes) of the Senate, Congress was prohibited from considering any legislation or amendment that did not meet IPAB financial targets.

Biden has said that if he is elected he will propose enacting a “public option” to reform Obamacare. That would place the federal government in competition with private health-insurance companies. With Emanuel again likely to be at the center of forming policy, we can expect the Biden administration to return to the IPAB approach to cost containment, which could entail the power to establish standards-of-care mandates that the original version lacked.

Promoting State-Enforced Medical-Price Controls
In a coauthored advocacy article in The New England Journal of Medicine in 2012, Emanuel proposed that the federal government issue grants to the states to persuade them to impose sweeping negotiated price controls that would be binding across the breadth of health care, again envisioning a panel of “experts” to establish and enforce the fiats. From “A Systematic Approach to Containing Health Care Spending” (my emphasis):

Under a model of self-regulation, public and private payers would negotiate payment rates with providers, and these rates would be binding on all payers and providers in a state. Providers could still offer rates below the negotiated rates.

The privately negotiated rates would have to adhere to a global spending target for both public and private payers in the state. . . . We recommend that an independent council composed of providers, payers, businesses, consumers, and economists set and enforce the spending target.

At that point, private health care would essentially cease to exist, as the technocracy seized control of nearly every aspect of the health-care systems of participating states.

Health-Care Rationing
Emanuel is a zealous advocate for the government to establish medical standards of care. He has supported schemes for health-care rationing. In an article in The Lancet in 2009, he proposed that resource allocation — i.e., who receives care and who is denied it — in times of scarcity be prioritized according to what he called a “complete lives system.” In a matter that is now of acute concern during the COVID-19 crisis, in which our elders are most at risk. Emanuel and his coauthors argued that age would be a splendid means of determining who should be rationed out of care: They meant infants and the elderly alike.

Why exclude care for infants? Because babies have not yet received considerable “investments” from parents and society. From “Principles for Allocation of Scarce Medical Interventions”:

Consideration of the importance of complete lives also supports modifying the youngest-ﬁrst principle by prioritizing adolescents and young adults over infants. Adolescents have received substantial education and parental care, investments that will be wasted without a complete life. Infants, by contrast, have not yet received these investments.

As for older patients, once they have passed their 40th year, they can be opted out because they have already lived a complete life. In an illustration of the profound injustices sure to be imposed by such a system, during the worst of the COVID-19 crisis, Italian authorities barred intubation of patients over the age of 60, regardless of their health.

Emanuel and his coauthors hedged about immediately imposing a complete-lives rationing system, noting that it would be “premature” to do so before reducing waste and increasing spending. He wasn’t so hesitant in The Hastings Center Report, where he explicitly advocated that guaranteed “basic care” be denied to the most weak and vulnerable according to quality-of-life measurements (my emphasis):

Services that promote the continuation of the polity — those that ensure healthy future generations, ensure development of practical reasoning skills, and ensure full and active participation by citizens in public deliberations — are to be socially guaranteed as basic. Conversely, services provided to individuals who are irreversibly prevented from being or becoming participating citizens are not basic and should not be guaranteed. An obvious example is not guaranteeing health services to patients with dementia.

So much for the intrinsic value of human life.

Forced Flu Shots
In an opinion piece in the New York Times in 2018, Emanuel argued that all children should be legally required to receive flu shots every year. He justifies the sledgehammer approach by noting that some children die each year from influenza. From “All Children Should Have to Get the Flu Shot”:

Some Americans hate government mandates, even when they are demonstrably beneficial. Rand Paul — a physician, no less — argued that mandatory vaccination is a violation of individual rights, claiming, “the state doesn’t own your children.” He called it “an issue of freedom.”

But the freedom to allow your child to contract and transmit a deadly disease is hardly a real freedom worth protecting. In 1905 the Supreme Court recognized the authority of states to enforce compulsory vaccination — in that case for smallpox. The court made it clear that the state may be justified in restricting individual liberty when “great dangers” threaten “the safety of the general public.”

I know the “If it saves one life” mantra. But good grief, there is a vast factual chasm between the dangers of annual flu and those of smallpox! According to the CDC, only 37 children in the United States died of flu during the 2011–12 flu season. The deadliest flu season in recent years (2017–18) killed 186 children, 80 percent of whom were not immunized. That’s tragic, but not a scourge like smallpox, which had a mortality rate of 20 to 60 percent in adults and of 80 percent in children.

I am a huge supporter of immunizations. But if a free society is to remain worthy of the name, reasonable limits must be placed on government impositions. Emanuel’s easy recourse to legal mandate in a relatively nonlethal circumstance of flu (and don’t believe it would stop there) suggests an autocrat’s desire for imposing overarching government control of everyone’s health care — a matter of particular concern in emergency times such as the present. After all, once government takes power unto itself, it rarely lets it go.

Government Coercion of Doctors
Emanuel also wants to dictate mandatory procedures for doctors to follow when interacting with their patients. In a coauthored advocacy article in The New England Journal of Medicine in 2013, he encouraged “shared decision making” conversations between patients and physicians. That might be a good idea, but Emanuel would require that doctors, when discussing treatment options with patients, use standardized education materials certified for use by the federal government, corroding the “art” of medicine and devolving the doctor–patient relationship into a check-the-boxes style transaction. As an enforcement mechanism, the proposed rule would reduce the doctor’s compensation if “the proper use of a decision aid” was not recorded in the patient’s file.

Of even greater concern, Emanuel would force doctors to provide medical services that violate their religious beliefs. In a coauthored piece in The New England Journal of Medicine in 2017, he argued that once the medical profession considers particular procedures, including abortion, “to be effective, ethical, and standard treatments,” doctors have no right to refuse a patient’s request. In other words, if a Catholic doctor believes it a grave injustice to terminate a pregnancy but a patient wants an abortion, the doctor must perform the procedure anyway. And if doctors don’t want to violate their moral or religious beliefs?

“Health care professionals who are unwilling to accept these limits have two choices,” Emanuel et al. wrote. “Select an area of medicine, such as radiology, that will not put them in situations that conflict with their personal morality or, if there is no such area, leave the profession.” From the utilitarian technocrat’s point of view, obliterating medical conscience would have the additional benefit of dissuading students with unwanted values — e.g., pro-lifers and people who hold various orthodox religious beliefs — from entering the medical profession at all.