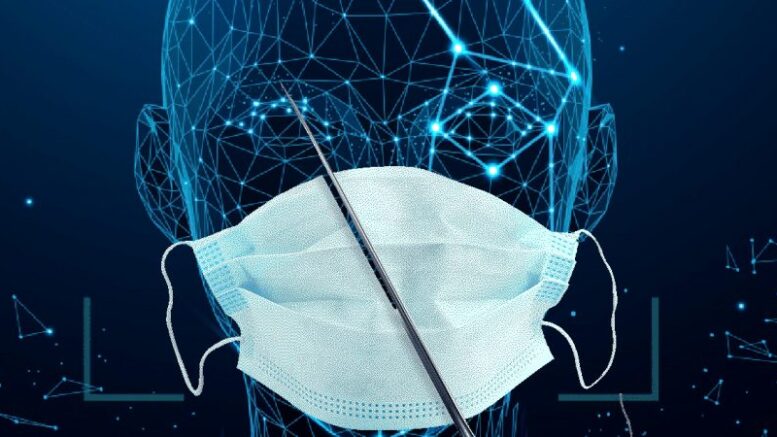 Existing facial recognition algorithms incur between 5 to 50% error rates due to the mandatory wearing of facemasks in public places. While this is a welcome development by privacy conscious individuals, this should make the COVID-PASSport and injectable microrobots necessary.

Facial recognition is suffering hard times due to face masks, but it is only a matter of time before algorithms are developed that add in whole body features, including heartbeat, gait, size, etc. ⁃ TN Editor

Many facial recognition companies have claimed they can identify people with pinpoint accuracy even while they’re wearing face masks, but the latest results from a study show that the coverings are dramatically increasing error rates.

In an update Tuesday, the US National Institute of Standards and Technology looked at 41 facial recognition algorithms submitted after the COVID-19 pandemic was declared in mid-March. Many of these algorithms were designed with face masks in mind, and claimed that they were still able to accurately identify people, even when half of their face was covered.

That day has yet to come, as every algorithm experienced marginal increases in error rates once masks came into the picture. While some algorithms still had accuracy overall, like Chinese facial recognition company Dahua’s algorithm error rate going from 0.3% without masks to 6% with masks, others had error rates increasing up to 99%.

Rank One, a facial recognition provider used in cities like Detroit, had an error rate of 0.6% without masks, and a 34.5% error rate once masks were digitally applied. In May, the company started offering “periocular recognition,” which claimed to be able to identify people just off their eyes and nose.

Rank One CEO Brendan Klare said the company wasn’t able to submit that algorithm to NIST because of the agency’s limit to one submission per organization.

“Thus, the NIST mask study does not reflect our ability to perform identification in the presence of masks,” Klare said in an email.

TrueFace, which is used in schools and on Air Force bases, saw its algorithm error rate go from 0.9% to 34.8% once masks were added. The company’s CEO, Shaun Moore, told CNN on Aug. 12 that its researchers were working on a better algorithm for detecting beyond masks.

“What should I do, doc? Take two microrobots and call me in the morning.” Transhumanism is the ultimate merging of technology with the human, and the drive to do so is relentless. Their endgame is life-extension and then immortality, with a dose of omniscience along the way. ⁃ TN Editor

Scientists have created an army of microscopic four-legged robots too small to see with the naked eye that walk when stimulated by a laser and could be injected into the body through hypodermic needles, a study said Wednesday.

Microscopic robotics are seen as having an array of potential uses, particularly in medicine, and US researchers said the new robots offer “the potential to explore biological environments”.

One of the main challenges in the development of these cell-sized robots has been combining control circuitry and moving parts in such a small structure.

The robots described in the journal Nature are less than 0.1 millimetre wide — around the width of a human hair — and have four legs that are powered by on-board solar cells.

By shooting laser light into these solar cells, researchers were able to trigger the legs to move, causing the robot to walk around.

The study’s co-author Marc Miskin, of the University of Pennsylvania, told AFP that a key innovation of the research was that the legs — its actuators — could be controlled using silicon electronics.

“Fifty years of shrinking down electronics has led to some remarkably tiny technologies: you can build sensors, computers, memory, all in very small spaces,” he said. “But, if you want a robot, you need actuators, parts that move.”

The researchers acknowledged that their creations are currently slower than other microbots that “swim”, less easy to control than those guided by magnets, and do not sense their environment.

The robots are prototypes that demonstrate the possibility of integrating electronics with the parts that help the device move around, Miskin said, adding they expect the technology to develop quickly.

“The next step is to build sophisticated circuitry: can we build robots that sense their environment and respond? How about tiny programmable machines? Can we make them able to run without human intervention?”

Miskin said he envisions biomedical uses for the robots, or applications in materials science, such as repairing materials at the microscale.

“But this is a very new idea and we’re still trying to figure out what’s possible,” he added.

Of course, who would stop them from enabling these robots to transmit your location in real time, or make your heart stop, or beat faster than it should, to and from a cell site nearby?

The dystopic possibilities are endless.

But not to worry though. What is run with electricity can be destroyed with higher electrical pressure, such as the one coming out from a device called Virutron® Antiviral.