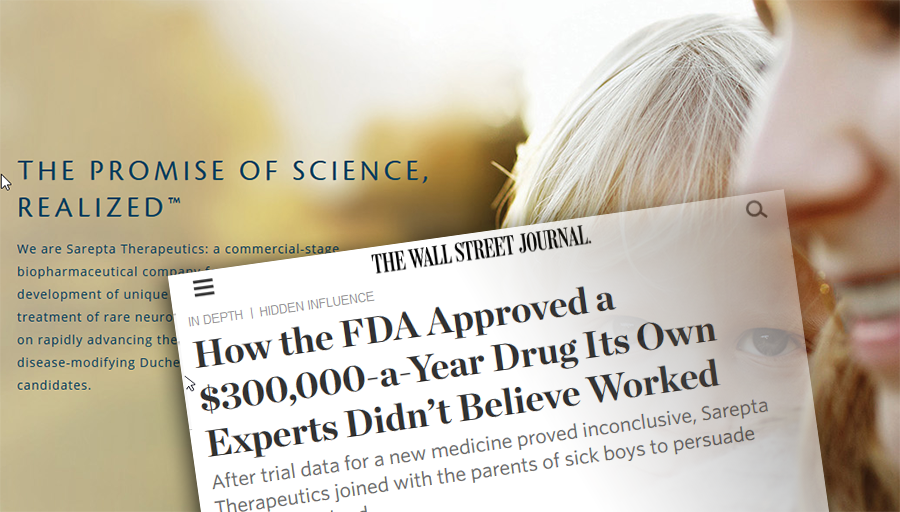 Most of the time, the pharmaceutical conscripts within the FDA will give the ceremonial nod first before a drug is allowed to flood the market. But a recent Wall Street Journal In-depth Report is now saying that sometimes an aggressive lobbying from the drug manufacturers, which have gained support from the patient’s loved ones, can also do the trick.

The WSJ article focuses on the Sarepta Therapeutics’s eteplirsen to treat Duchenne muscular dystrophy [DMD] – a rare genetic disorder characterized by progressive muscle degeneration and weakness. DMD is caused by an absence of dystrophin, a protein that helps keep muscle cells intact. Symptom onset is in early childhood, usually between ages 3 and 5, and occurs mostly in boys.

The authors Susan Pulliam and Brody Mullins found out that:

“Sarepta used the parents to push their regulatory agenda.

We were willing participants, but they were trading on our desperation.” Catherine Collins, parent of a son who has DMD.

Looking at the bigger picture, we can see that it’s a mainstream medium, i.e. Wall Street Journal, which is taking on the product of a competitor to GlaxoSmithKline, one of Big Pharma’s highly profitable tentacles.

Is it possible that Sarepta Therapeutics may have found a real cure for DMD, and that Big Pharma just don’t want it to be marketed so as not to defeat the purpose by which aluminum and mercury are being blended into their vaccines?

This is a nasty game we are being forced to play on.

Ignore the fearmongering. Produce your own food. Establish your own source of clean water. Try healthcare options that are based on sound, commonsensical and verifiable science.

Don’t be fooled by any aggressive, high profile corporate marketing tactics. Only your own unbiased research will lead you to the cure.