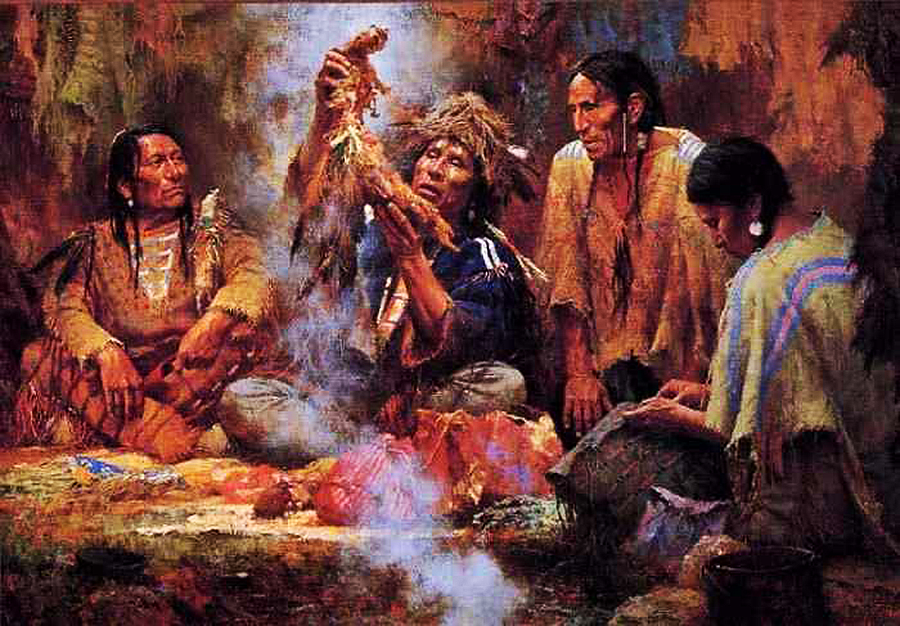 The modern approach to medicine is one of needless complexity, and deliberate suppression of the long proven protocols that worked! The terms used today are much harder to understand than in the days of old, or has assumed different meanings.

Or, so we thought.

Alchemy of Power: How the Pharma Industry Manipulates the World

During the Middle Ages, knowledge about the healing properties of plants mainly came from druids and witches. These people knew about nature and healing, and could treat health problems such as inflammation or small wounds with simple mixtures of leaves and herbs.

But this eventually made them a threat to the Church.

Catholicism was very powerful and did not accept any solutions to disease other than,

Even if there was no cure available for a disease during a person’s lifetime on Earth, a great life in ‘heaven’ was promised to them afterwards.

So druids, witches, and their natural remedies represented a threat to this model. Labeled as evil, they were brutally eradicated.

In the early 1900s cocaine and heroin were legal, everyday drugs.

…and both were prescribed as mood enhancers.

C.F. Boehringer from Mannheim, Germany, was proud to be the world’s leading cocaine producer. Even wines often contained cocaine, and so were consequently in huge demand.

On the label of Maltine wine, produced in New York, people were instructed to consume a full glass during and after meals, with children recommended to take a half glass full. Metcalf was another famous cocaine-wine that was popular as a party drink.

Vapor-OL was a mix of alcohol and opium that was claimed to cure asthma and spasms.

As wine bottles were too bulky to put in handbags, ladies instead carried small cocaine tablets with them when they went out. These were supposedly used to enhance mood and treat the vocal cords.

For avoiding sore throats, such tablets were seen as essential for singers, mothers with young children, and teachers. Children were even given cocaine tablets for toothache. It only cured the symptoms, of course, and the pain soon came back once the effects of the drug wore off.

Even today, dentists use a modified form of cocaine known as Lidocaine to numb nerves before surgery.

Another example is a drug known as Paregoric, produced by Stickney & Poor’s, which contained 46% alcohol and a large percentage of pure opium.

Unbelievably it was recommended as a sleeping aid for newborns, who were to be given 3 drops daily. 8 drops daily were advised for 8 day old babies; 25 drops for 5-year-olds; and an entire tablespoon for adults.

No doubt everyone slept well…

Today there are museums in Germany, such as in Dortmund and Heidelberg, where you can see medicine bottles and jars from those bygone days. It is worth a visit, they’re very educational…!

The legal drugs of today

It would be wishful thinking to pretend that dangerous drug-based medicines no longer exist. The nightmare is still out there, every day.

We are confronted with it the minute we get sick and go to our doctor seeking medical treatment.

The chemical drugs prescribed by conventional doctors cause multiple side effects.

While our body understands – and can safely metabolize – natural molecules, the synthetic manmade chemicals that doctors prescribe are foreign to it.

Take the example of warfarin, an anticoagulant (blood thinning) drug, which is prescribed for millions of people suffering from cardiovascular disease. Also used as rat poison, it is one of the leading causes of death in hospital emergency rooms in the United States.

For those patients it doesn’t kill, the possible side effects of warfarin include,

Many deaths from hypovolemia, a dangerous decrease in the volume of blood in the body, are linked to the long-term use of blood thinning drugs.

Have you ever thought about what the word ‘antibiotic’ actually means? It means ‘against life (anti: against; biotic: life)’…

If you eat non-organic meat, you get a dosage of chemical antibiotics each time you enjoy that fine piece of beef or chicken wing. Make no mistake, antibiotics are toxic.

When patients develop the flu, many GPs immediately prescribe them chemical antibiotics. These kill ALL bacteria in the bowel – including the ‘friendly’ ones. Proper digestion and absorption of micronutrients are then impossible for days afterwards.

But there are other, safer, approaches.

Many natural antibiotics exist that are based on plants and which won’t harm the beneficial bacteria that live in the bowel.

These natural antibiotics are very powerful. But as they can’t be patented they are of no interest to pharma companies because the profit margin is too low.

A healthy body is no use to the drug industry; only sick bodies generate profits.

Fluoride is toxic and does not belong in toothpaste

Another extremely toxic substance is fluoride, which is an ingredient in most toothpastes.

Raymond Francis, an MIT-trained scientist, has described fluoride as one of the most toxic chemicals in our environment and a vast experiment. Only a handful of toothpastes are decent, the best ones contain natural substances such as tea-tree oil and sea salt.

A waste product of the chemical fertilizer industry, fluoride is also a main ingredient of antidepressant drugs such as,

The easy accessibility of antidepressants

Kim, 38, describes her experience as follows:

“I just had a baby and suffered from so called ‘Baby Blues’.

I wasn’t feeling well, had mood swings, and could not easily fall asleep. I was anxious and restless. I went to see my GP and he prescribed Zoloft to ‘take a bit of the edge off’.

I didn’t think about it and in the beginning it worked well, I felt less emotional about things and could sleep better, but after some months I was more depressed than ever before.

It was my birthday when I got a gift and I could not even be happy about it, but felt completely numb, when I realized I had to stop. It’s months ago that I took the last pill and even now I have not fully returned to the old ‘me’.”

These days, even children and teenagers are given antidepressants. Disturbingly, some 6-year-olds are now on them and the number of young users is increasing.

Consider some of the possible side-effects:

For more information on the dangers of antidepressants, visit the ssristories.org Website.

To treat depression naturally, recent research suggests that large amounts of the omega-3 fatty acids DHA and EPA, together with a selection of micronutrients, may be effective.

Shouldn’t our governments have a moral and legal duty to start funding scientific studies dealing with natural health approaches? They should, but unfortunately financial interests are preventing this from happening.

As you might imagine, at the political level, profits like this buy the pharma industry a lot of influence.

Who controls the world?

Large shareholdings in some of the world’s biggest corporations are owned by a web of globally operating families.

“Let us control the money of a country and we care not who makes its laws.”

The maxim of the house of Rothschilds, and the foundation principle of European banks, as described in a report on official US government hearings in 1914.

In the area of banking, one of the most influential families is the Rothschild family.

Descended from Mayer Amschel Rothschild, who established a banking business in the 1760s, the UK’s Daily Telegraph newspaper has described them as a byword for wealth and power, observing that,

“the Rothschild name has become synonymous with money and power to a degree that no other family has ever quite matched.”

Tellingly, it is said that the original version of the hit song from the Fiddler on the Roof musical was not If I Were a Rich Man, but If I Were a Rothschild…

So far as the development of the pharma industry is concerned, arguably the most important influence was an American named John D. Rockefeller.

A short history of his drive to create an industrialized health care system can be read on our Foundation website.

There is also a revealing book titled ‘Rockefeller Medicine Men‘ which describes how, in the early years of the 20th century, Rockefeller created the pharmaceutical investment industry to further the already massive wealth and power he had accumulated via his control of the oil industry.

The key principles behind Rockefeller’s drug business plan, which form the laws of the pharma industry today, were as follows:

In a vivid illustration of how key families in the global investment business link up with each other, in May 2012 it was announced that the Rothschild banking dynasty had bought a 37 percent stake in the Rockefeller group’s wealth and asset management business.

The move brought together David Rockefeller, then 96, and Jacob Rothschild, then 76 – family patriarchs whose personal relationship is said to have spanned five decades.

The pharma industry’s main goal is not cure, but profit

Drug companies aren’t interested in curing patients, their sole focus is on turning them into lifelong customers.

This means that the marketplace for the pharma industry is the human body. With help from the food industry, which produces processed fast foods and sugary soft drinks, the transformation of health into sickness – upon which drug companies financially thrive – can easily be achieved.

To ensure everything runs smoothly, expensive advertising agencies are employed. The largest of these are present in multiple countries and offer pharma companies direct contact with government health officials.

But it is not all bad news…

As organic and healthy lifestyles become more and more popular, people are increasingly feeling the beauty of reconnecting with nature. New approaches to education are teaching children to think for themselves and make their own choices.

Natural therapies with micronutrients and healing plants are increasingly available and are being used by larger numbers of people.

Social media has played a major role in this through people sharing their experiences online. The inevitable result of all this is that, slowly but surely, the pharmaceutical industry’s power and influence is being reduced.

While we don’t yet have large hospitals and universities promoting natural remedies, one day we most surely will.

4 thoughts on “Have You Ever Thought What Antibiotic Really Means?”