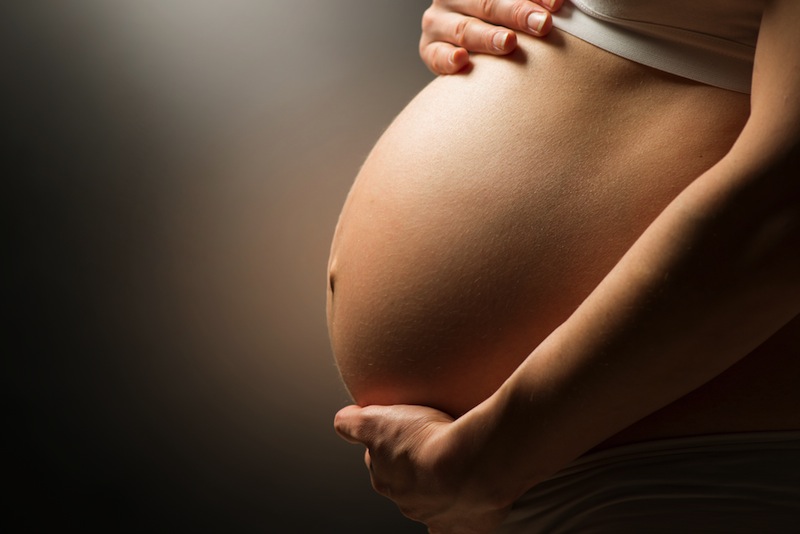 In the last decade, studies by EWG and other researchers have firmly established that toxic chemicals can pass from pregnant women to fetuses through the umbilical cord, affecting children’s future health and development.

Now a growing body of research shows that some chemicals may alter gene function in ways that can be passed on not only to the immediate offspring, but also to grandchildren and perhaps even great-grandchildren.

The impact of toxic chemicals on generations of offspring with no direct exposure to the contaminant is known as a transgenerational effect. Increasingly, scientists find that short-term exposures during pregnancy to some chemicals can cause reproductive system damages, alter body weight, and even increase the risk of cancer for great-grandchildren of exposed animals. 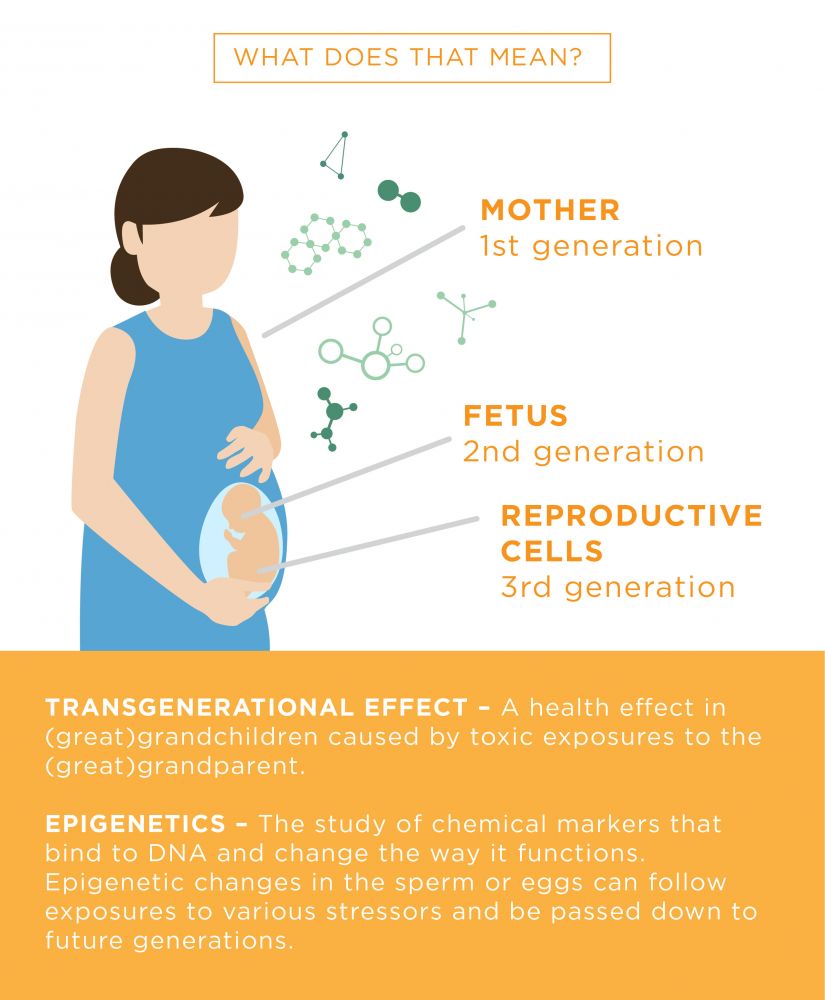 These impacts are thought to be passed down through modification of the epigenome ­– the pattern of gene markers that change DNA to fine tune the functioning of specific cells in the body. The study of why and how this happens is called epigenetics.

All of our cells contain the same DNA – a complete blueprint for every cell and process in the body. But not every gene needs to be used in all cells or at all times. Epigenetic markers attach to DNA to modify the way it functions. Small markers called methyl groups bind to DNA and turn off genetic instructions that aren’t needed and allow others to be expressed.

Think of a college textbook. If DNA is all of the letters in the book, then epigenetic markers are the spaces and punctuation between words. They also include the note at the beginning of each chapter alerting a medical student studying for a test on the digestive system that they can skip the chapters on the reproductive system and respiration.

The evidence of transgenerational toxicity

Research on chemical toxicity, early life nutrition, smoking and radiation has found evidence of harm even in offspring with no direct exposure to specific contaminants. These findings are important and have already begun transforming regulation of hazardous chemicals, from focusing primarily on the direct consequences of individual substances to assessing the potential impacts on an exposed woman’s child. Greater understanding of epigenetics amplifies the need for a more protective approach to chemical risk assessment that would consider effects beyond the exposed generation.

Groundbreaking research by Mohan Manikkam and Michael Skinner of Washington State University at Pullman helped establish the principle of transgenerational toxicity by showing that the effects of toxic chemicals can extend even to the third generation of offspring. 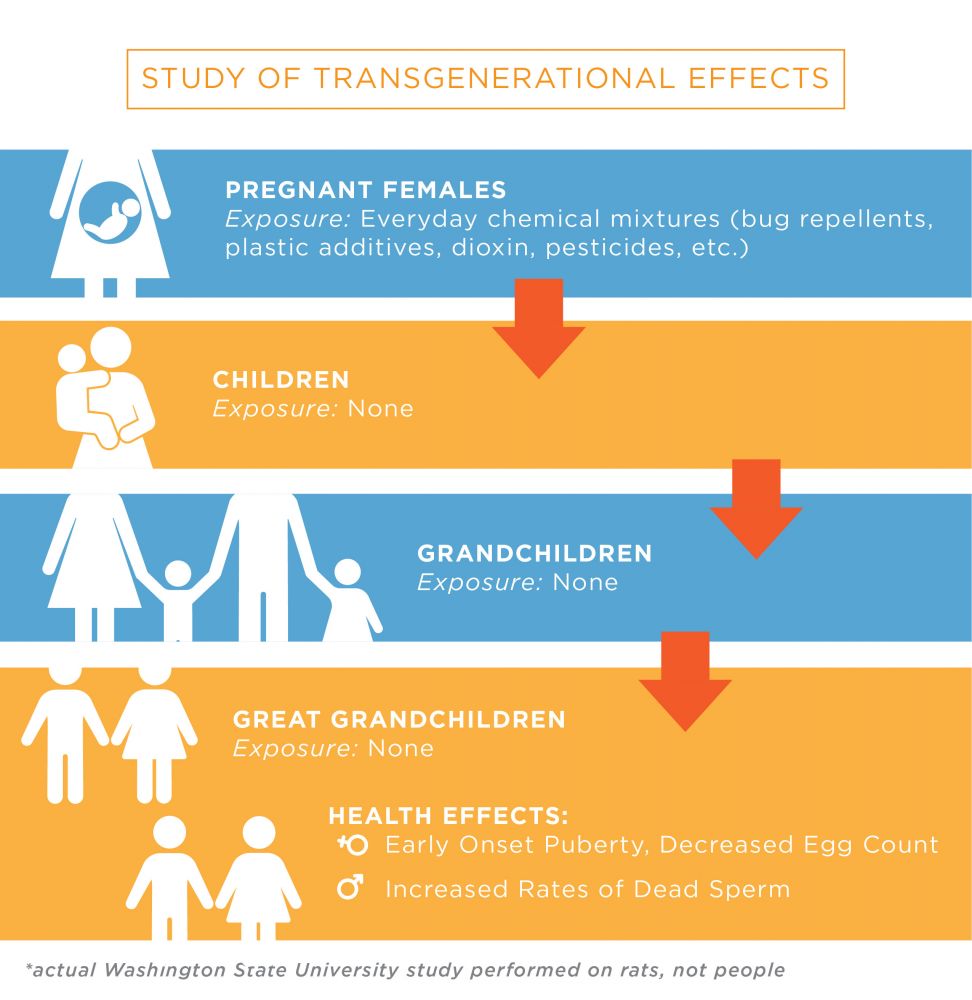 In one study, the researchers tested the transgenerational impacts of mixtures of chemicals to which people are commonly exposed in everyday life, including bug repellents, plastics additives and jet fuel. After exposing pregnant rats to these chemical mixtures, they bred three subsequent generations of animals and did not expose them to the contaminants.

Despite no direct exposure to the chemicals, the third-generation rats had damaged reproductive systems. Females had earlier onset of puberty and fewer undeveloped eggs in their ovaries. Male rats had higher levels of dead sperm.

In a subsequent study of similar design, the researchers observed a 50 percent increased risk of obesity for the unexposed great-grandchildren of rats exposed to the banned pesticide DDT during pregnancy. The team found altered epigenetic markers in those third-generation rats.

At this point, however, there are very few studies of multigenerational toxicity in people. Such studies focus on the health effects on grandchildren of people with unusual psychological stress, poor nutrition, or exposure to radiation or prescription drugs during pregnancy. Studying people is complicated because we live much longer than rats, so experimental research is necessary to learn more about this phenomenon.

Why does research on transgenerational impacts matter?

Further research on epigenetics and transgenerational impacts may shed light on several notable and concerning health trends. Researchers have raised the possibility that these impacts could be linked to an increase in infertility, developmental problems in children and pediatric cancers. Today, both American children and those in other countries are more often diagnosed with neurological and behavioral conditions than children of past generations. Experts say the changes observed today could be related to pollutant exposures during gestation, and even those before conception.

EWG offers guides to avoid exposures to known hazards, but we don’t yet know which chemicals might pose risks for transgenerational effects. In the meantime, to improve the health of all Americans and reduce the pervasive inequity in pollutant exposure, we must remove hazardous contaminants from air, water, food and consumer products. (On a personal level, old-fashioned advice such as eating plenty of fruits and vegetables and exercising is always good to follow.)

When it comes to addressing the risks of toxic chemicals, most government agencies are still operating in a 1980s paradigm – looking at the effects of one chemical at a time, catering to polluters’ interests more than public health concerns, and failing to protect the health of future generations.

Yet there is a bright spot. The National Toxicology Program, or NTP, is taking leadership in this emergent area, highlighting the growing evidence that some chemicals can alter epigenetic markers in sperm and eggs in a way that can be passed down to the next generation.

Last year EWG petitioned NTP to test the so-called Halifax approach to assessing the carcinogenic potential of exposures to chemical mixtures at environmentally relevant levels. The Halifax framework emphasizes that numerous chemicals can trigger the development and progression of cancer – even when these chemicals do not meet the traditional definitions of a carcinogen, as EWG described in our Rethinking Carcinogens report.

This week EWG testified at the NTP Board of Scientific Counselors, bringing the public health perspective to the foreground as the program considers its next steps on this important line of inquiry. EWG is eager to see NTP continue research on the potential for mixtures of environmental contaminants to cause cancer and non-cancer effects. The scientific understanding of the effects of mixtures will greatly benefit from the program’s studies, as well as from expanded monitoring of real-life exposures.

Despite decades of research into the relationship between people’s health and the environment, the medical community and government agencies face many daunting challenges when addressing the cancer epidemic, learning and behavioral problems that originate in childhood, and obesity and related metabolic disorders.

The latest science points to a largely unexplored ability of chemicals and nonchemical stressors to modify essential body functions, and suggests even short-term exposures could cause lasting damages. Only an investment in science and a committed public health framework for risk assessment will direct the nation toward a future of greater understanding, prevention and treatment for these intractable health problems.

Report: Some Chemicals May Alter Gene Function for Several Generations

WASHINGTON – The harmful effects of some chemicals can be passed down not only to children, but also to grandchildren and even great-grandchildren, according to a new EWG report on the growing body of transgenerational toxicity research.

The impact of toxic chemicals on generations of offspring with no direct exposure to the contaminant is known as a transgenerational effect. A limited number of new studies suggest that short-term exposures to some chemicals during pregnancy can cause reproductive system damages, alter body weight, and even increase the risk of cancer for great-grandchildren of exposed animals.

“New science suggests that exposure to contaminants during pregnancy can have health impacts decades later,” said EWG Senior Analyst Sonya Lunder, author of the report. “We need to know more about this phenomenon in order to protect our children and great-grandchildren from the effects of harmful pollutants.”

Groundbreaking research by Mohan Manikkam and Michael Skinner of Washington State University at Pullman helped establish the principle of transgenerational toxicity by showing how toxic chemicals affect subsequent generations that are not directly exposed. In one study, the researchers tested the transgenerational impacts of mixtures of chemicals that people are commonly exposed to in everyday life, including bug repellents, plastics additives and jet fuel. After exposing pregnant rats, they bred three subsequent generations of animals with no exposure to the contaminants.

Despite no direct exposure to the chemicals, the third-generation rats had damaged reproductive systems. Females had an earlier onset of puberty and fewer undeveloped eggs in their ovaries. Male rats had higher levels of dead sperm.

Very few studies of multigenerational health effects in people have been conducted so far. More experimental research is necessary to learn more about this phenomenon and shed light on several concerning health trends including infertility, obesity, and even cancer.