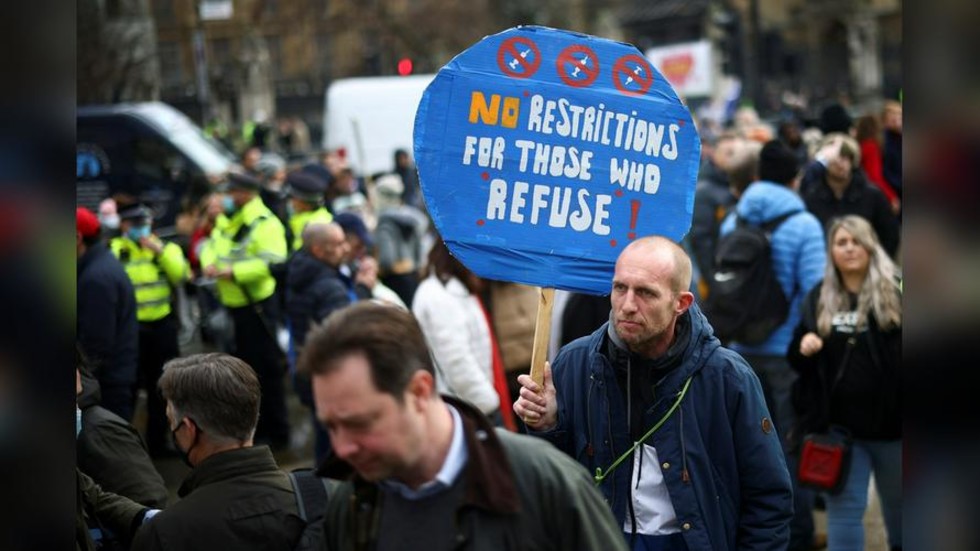 Merriam-Webster is again redefining language to fit a narrative, this time framing its definition of “anti-vaxxer” to include not only people who oppose vaccination, but also those who are against inoculation mandates.

The definition on Merriam-Webster’s website says “anti-vaxxer” means “a person who opposes vaccination or laws that mandate vaccination.” It’s not clear when it was written to include opposition to forced jabs, but many observers noticed for the first time on Wednesday.

“Welcome to ‘1984.’ This is the Ministry of Truth,” rapper and podcaster Zuby said on Twitter, referring to George Orwell’s dystopian novel.

Welcome to 1984. This is The Ministry of Truth. pic.twitter.com/a62lBOCJDj

Other reactions were similar, with many commenters noting that they now fit the dictionary definition of “anti-vaxxer,” even though they believe in the benefits of vaccinations and choose to receive the shots themselves. Merriam-Webster’s definition appears to dismiss the concept of favoring a product personally but being opposed, on principle, to forcing others to use it.

Today I begin my new life as an anti-vaxxer https://t.co/XNSRYmTRZ2

“Today, I begin my new life as an anti-vaxxer,” podcast host Matt Walsh said. The conservative Young America’s Foundation added that “when the Left control the language, they control the narrative.”

The Merriam-Webster Dictionary updated its definition of "anti-vaxxer" to include anyone who opposes mandatory vaccinations.

When the Left controls the language, they control the narrative.

Such was the case – or at least the attempt – last October, when Merriam-Webster edited its definition of “preference,” noting that it was “offensive” in reference to a person’s “sexual preference.” The revision helped back up US Senator Mazie Hirono (D-Hawaii) when she accused Supreme Court nominee Amy Coney Barrett of being biased against gay people when she used the term as a synonym for ”sexual orientation.”

And last June, Merriam-Webster expanded its definition of “racism” to include “systemic oppression” of one racial group by another. That revision reportedly came in response to a Black Lives Matter activist who suggested the change after losing arguments with people who said they weren’t racist because they didn’t consider their own ethnicity to be inherently superior.

“Anti-vaxxer” was the most-searched definition Wednesday on Merriam-Webster’s website. Users of the site posted comments under the definition, complaining of “politics in the dictionary.” One observer said, “I, along with most of America, do not believe that trusting vaccines is synonymous with mandating them. We can’t even trust the dictionary anymore.”

The term “anti-vaxxer” is relatively new, having entered the Merriam-Webster dictionary in 2009, and is used by media outlets and political commentators as a pejorative – like “9/11 truthers” and “birthers” – to brand vaccine skeptics as unhinged conspiracy theorists.

But as National Review pointed out on Wednesday, the latest Merriam-Webster definition classifies 79% of Americans as anti-vaxxers. A Morning Consult poll in December found that only 21% of respondents favored forced vaccinations.

Merriam-Webster tweaked its definition of “vaccine” in January, apparently to make it more friendly to the new mRNA-type inoculations that were created to prevent the spread of Covid-19. – RT.com