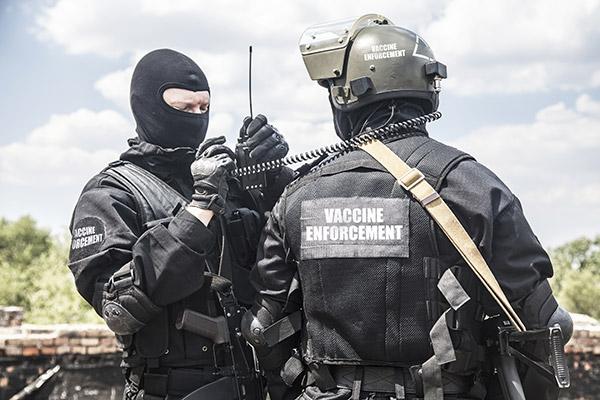 Pediatricians have a license to mistreat their young patients with vaccines and now support throwing parents of unvaccinated children in jail. Dr. Sircus

A mountain of data has demonstrated that pediatricians are ogres who attack children with hostile substances like mercury in vaccines and antibiotics that cause problems without end. They are a most arrogant lot who hide behind their white coats and smiles.

The vaccine wars are heating up again. We see this in the Super Bowl where the public is under scrutiny for anyone displaying measles symptoms, even though the rash of measles does not show up for four days after exposure. Pharmacies are being monitored for purchases relating to measles, etc. The vaccine industry is making too big a deal of measles, which is strange since there have been no deaths of unvaccinated measles sufferers since 2003. A similar concern appeared after the 2012 Superbowl and was described afterwards as a very minor outbreak.

Do not be terribly surprised if someday laws are passed that will ban the unvaccinated from attending any “events” sporting or otherwise that might expose others to measles, which the older of my readers should have all had as a child. The vaccine did not come out 1963.[1] All the kids in school had measles and passed it around and all of us developed natural immunity. No one died, though we all got the rash and were miserable for a while.

Dr. David Brownstein says, “The hysteria surrounding this outbreak is beyond me. I have seen the articles stating that parents who choose not to vaccinate should be prosecuted. Parents who choose not vaccinate have been accused of child abuse. Measles is a highly infectious disease. It is very common throughout the world. In fact, it is estimated that over 20 million cases of measles occur worldwide on an annual basis. Measles can lead to severe problems including encephalitis and death. However, serious complications from measles are rare in the developed world.” 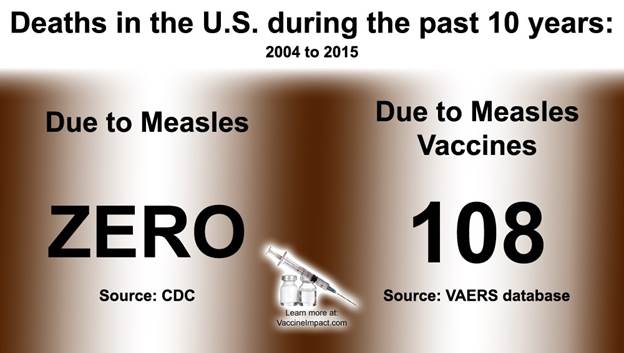 “Parents who do not vaccinate their children should go to jail,” writes USA Today columnist Alex Berezow, who obviously believes that vaccines are the best thing next to apple pie. He like 80% of the population believes in the false agenda of pediatricians and their supporting organizations like the CDC and FDA.

Mike Adams, the Health Ranger responded, “Now we finally come to the real agenda of the vaccine industry. After vaccines have been repeatedly documented by the Natural News Lab to contain neurotoxic chemicals such as mercury, formaldehyde and MSG; after vaccine shots have been repeatedly shown to kill people who take them; and after flu shots have been exhaustively shown to be based on no science whatsoever — with vaccine manufacturers openly admitting there are no clinical trials to show they even work — the rabid vaccine pushers are unveiling their end game: throw vaccine resistors in prison.”

There is a new illness bubbling up out of nowhere it seems, that strikes children with polio-like symptoms and so far doctors have not a clue what it is or where it came from. It appears to have popped up first in California – and more recently four other states – more than 30 years after the last naturally occurring polio case was seen in the U.S.

Doctors have more questions than answers about a mysterious polio-like illness that has paralyzed at least 107 children in 34 states since August “leaving victims, mostly children, with paralyzed limbs,” says a new report in National Geographic and although doctors suspect a virus, there has been no clear cause identified.

The best-case scenario is complete loss of one limb, the worst is all four limbs, with respiratory insufficiency, as well. It’s like the old polio,” Keith Van Haren, a pediatric neurologist at Lucile Packard Children’s Hospital, explained in an interview with USA Today.

The children, all of whom had been successfully immunized against polio, range in age from 2 to 16, and their paralysis—which came on suddenly, as if out of nowhere—is apparently incurable. “The CDC says, “But at this time we don’t think the situation in California is a cause for public concern.” That kind of statement one would expect from a terrorist organization; but what can one expect from an organization that endorses injecting mercury into babies and children every year via the flu vaccine.

Dr. Jack Wolfson writes, “Be angry with your doctor for being close-minded and not disclosing the ingredients in vaccines (not that they read the package insert anyway). They should tell you about the aluminum, mercury, formaldehyde, aborted fetal tissue, animal proteins, polysorbate 80, antibiotics, and other chemicals in the shots. According to the Environmental Working Group, newborns contain over 200 chemicals as detected by cord blood. Maybe your doctor feels a few more chemicals injected into your child won’t be a big deal.”

One can search all the essays online about this mysterious disease but one will not find anywhere any mention of a thought that would pin this polio-like disease as a reaction to vaccines. The polio vaccine has the potential to inflict punishment on the body and this could be a new manifestation.

Would you thus be surprised to read, “In 2011 alone, the Bill and Melinda Gates’ polio vaccine campaign in India caused 47,500 cases of paralysis and death.” Or that, “In 1976, Dr. Jonas Salk, creator of the killed-virus vaccine used in the 1950s, testified that the live-virus vaccine (used almost exclusively in the U.S. from the early 1960s to 2000) was the ‘principal if not sole cause’ of all reported polio cases in the U.S. since 1961?

Dr. James Cherry, a prominent UCLA pediatrician and infectious disease expert, publicly joined in the blame and shame game, hurling insults at parents declining to give children every one of the government recommended 69 doses of 16 vaccines, including two MMR shots. Dr. Cherry said, “There are some pretty dumb people out there,” and “Some people are just terribly selfish.”

I can get sick to my stomach if I think too long on the subject of pediatric medicine. When I read the APA’s positions on medical marijuana disgust flows through my soul. The American Academy of Pediatricians (AAP) opposes the use of marijuana for medical purposes, except for drugs that are approved by the Food and Drug Administration. Currently, there are two FDA-approved drugs that contain synthetic cannabinoids, which are compounds similar to the active ingredients in marijuana.[2]

According to the AAP, medical marijuana should only be used for severely ill kids who have no other treatment option. Children should always try the more dangerous, expensive and toxic treatments first before they try something safe like medical marijuana.

James Howard Kunstler writes about the necessities of the moment, “Those necessities include freeing a hostage public from the tyrannical clutches of corporate despotism — the evil empire of big boxes, big burgers, big pharma, Big Brother — and the atrocious rackets fostered by them that masquerade as an economy. The template of the life we have known is broken and the pieces within are flying apart, and no amount of wishing or promising can keep them going. If this society is even going to survive, the people have to smash their way out of this template prison, probably against the efforts of the people and organizations now running it merely for their own benefit.”

Most parents and children cringe at the thoughts of vaccines or even going to the doctor but hope for the best and get surprised by the worst when something bad happens to them, like vaccine damages or serious diseases that erupt after repeated use of antibiotics.

Every single parent who takes their children to a pediatrician from the AAP is casting their vote for pediatric terrorism. It is hard to envision vaccine realities, where people just walk into clinics with their children to be injected with poisons (that are in vaccines) that kids do drop dead from on occasion and many others are harmed through various physiological mechanism to a life time of misery and disability.

If Americans are eventually thrown into FEMA camps or prisons for not vaccinating their kids it will be just more of the same from one of the nastiest governments in human history, which has thrown millions already into jails for smoking a common medicinal weed.

Just like there is a “legal license held by governments and bankers to rob people of the wealth they create,” pediatricians have a license to mistreat their young patients along government guidelines. It is a sad state of affairs in our civilized world, which is plunging into chaos and darkness. This is the case economically, politically, environmentally and tragically in the field of medicine, which fewer and fewer people can afford.