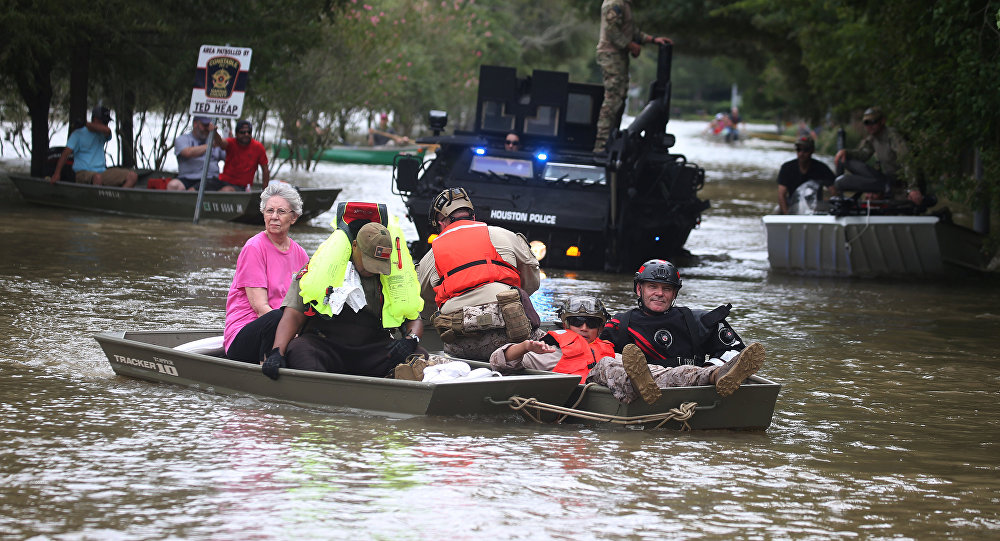 Everything, from gas to food prices, went up after Hurricane Harvey left Texas devastated and flooded. “A gallon of gas may cost between five and 15 cents more in parts of the country, predicts Tom Kloza, chief oil analyst at the Oil Price Information Service. Prices should fall back down by next week, but that could change if damage from the storm is worse than expected.”

Rebuilding the 200,000 homes that were sitting right on the storm path may cost up to $40 billion, according to CoreLogic estimate. But economists say the region is likely to recover quickly and may even experience a bump in growth from rebuilding, NY Times reported.

Whose economy will bump from rebuilding their shattered homes? Surely, it’s not the victims.

The economy of destruction and scarcity is alive and still kicking. The concentration of the nation’s petrochemical industry on the Gulf Coast ensures that the price of gas will skyrocket for weeks, not just in Texas, but for the whole country. That is why the Corporation can still afford to give out some freebies, like suspended tax collection at ground zero. Other cities can take the tab.

The damage is likely to be a fraction of Hurricane Katrina.

Moody’s Analytics estimates that the damage will be $40 billion to $50 billion. The first and smaller set of losses — less than $10 billion — will come from things that do not happen: homes not purchased, sales not closed, gas not bought or shipped. The second and larger set of losses, totaling tens of billions, will come from property damage.

“Things are too preliminary to know at this point, but I would expect Harvey to be one of the two most costly in history when all is said and done,” said Mr. Perryman, chief executive of the Perryman Group of Waco, Tex.

What it might be contaminated with ranges from unpleasant but relatively harmless gastrointestinal hazards, such as norovirus, to rarer, more serious bacteria — including Vibrio, a potentially deadly micro-organism naturally found along the Gulf Coast. Vibrio can make you sick both by ingesting it and also through wound infections that come in contact with flood water. Your best bet at this point is to ensure your water is properly filtered and stay out of the flood water.

One of the biggest concerns with flood water is the possibility of cholera, a highly contagious bacterial disease-causing severe diarrhea. Cholera can spread when water is contaminated with infected feces and then others ingest it, either by drinking the water or consuming food that has come in contact with the water. While cholera is far more common in third-world countries, Glatter says the possibility of it occurring in Texas “wouldn’t be impossible.” “These types of bacteria can live in mixtures of murky water,” he said. “It’s possible to have this type of infection, especially if the water supply becomes contaminated.” Other infectious diseases that can be passed through flood water include hepatitis A, typhoid fever, and Leptospirosis, a bacterial infection that can cause muscle aches, vomiting, abdominal pain, and diarrhea.

As well, due to the excessive flooding in many homes, mold could also pose a serious health problem and can exacerbate asthma, allergies, or other respiratory diseases like COPD. Mold can appear in as little as 24 to 48 hours after flood waters recede. Experts suggest not to touch it. Wear rubber gloves, wear a mask when handling it and if you are in a dwelling where there is mold, you should leave.

As well as a few others that mainly affect animals:

So it’s important for homeowners in this region to take certain measures to prevent the proliferation of mosquitoes. This requires keeping an eye out for things on your property that might contain even the smallest puddles of water. As well, experts are recommending that homeowners drain pools and if you see mosquitoes in larger areas of standing water to alert authorities.

Make sure you clear any trash or debris in your yards such as tires or cans and don’t leave any water out in flower pots or water bowls. It’s also a good idea to secure any leaky pipes you might have outside of your home, and clear out any leaves in your gutters. In some cases, you may need to fill or drain spots that tend to collect water on your property.  As an added defense, build traps that will cull the local mosquito population.

While the hurricane itself is one of epic proportions, the aftermath could be just as bad and just as destructive. Knowing what to expect will help an already battered community prepare for the next set of challenges they face.

However, an uglier development has emerged. Some people are posing as Homeland Security Investigations [HSI] special agents, and are conducting systematic looting of some houses.

“There are disturbing reports that people impersonating HSI special agents are knocking on doors in the Houston area telling residents to evacuate, presumably so these imposters can rob the empty homes,” according to an ICE statement.

ICE recalled that all those officers who represent the HSI should wear “special agent” badges which “members of the public can ask to see and verify.”

There are also some reports about immigration enforcements at the assistance centers like food banks and shelters. Except for the natives, everybody else is an immigrant in America, so this issue should not divide the nation anymore.

The short answer is: every time they needed the economic impetus of a “natural disaster” they will certainly use it.

Considering the high gain from the cost of rebuilding the homes in the coming days, and the cost of surviving the immediate aftermath of the storm, as conservatively estimated by the mainstream media above, there’s a very high probability that they are playing with it again.

One needs only to look at who exactly were purchasing cheaper stock prices months prior to the event, and selling it now at higher prices, thereby indicating foreknowledge.

Nonetheless, there may be no parallel available to any other rainstorm in U.S. history as Mashable’s Andrew Freeman reports Tropical Storm Harvey has dropped more than 11 trillion gallons of water on Texas, triggering catastrophic, unprecedented flooding in the Houston area.

The rains have broken all-time records, exceeding the rainfall totals seen during Tropical Storm Allison in 2001… and it could be about to get a lot worse as forecasters are expecting the storm to turn back and drench what is left of Houston once again midweek.

According to Ryan Maue, a meteorologist at WeatherBell, a private forecasting firm, there is still up to 16 trillion gallons more rain likely to fall in the state, based on forecasts from the National Weather Service (NWS).

The Weather Service office in Houston reported just over 2 feet of rain in 24 hours between 7 a.m. Saturday and 7 a.m. Sunday morning, causing August to become the wettest month on record there. Forecast totals call for isolated rainfall amounts of up to 50 inches before Harvey finally releases its grip on the Lone Star state late this week. If this comes to fruition, it would be the greatest rainfall totals from a tropical storm or hurricane in U.S. history.

Maue estimates that a total of around 25 trillion gallons may be the final statewide rainfall total for Harvey, which is such a unique storm due to its slow-moving nature that the NWS has nearly run out of superlatives describing it.

Our own species developed on this planet because it was already conducive to be so. Any weather disturbance that is over extended for a length of time is never natural. Nature is self-regulating and it can correct its own imbalance in time.

For a basic discussion about weather manipulation, please read:

Wishing all the best for Texas.