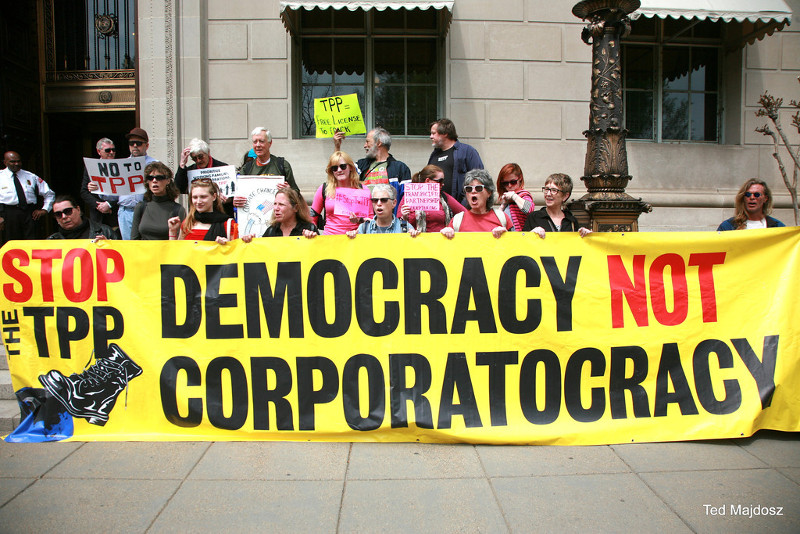 The passage of the final version of the secretive TPP a few days ago will literally kill any drug dependent today because it would raise up the prices of even the now cheaper generic versions of an antibiotic, or take them out of the market altogether due to intellectual property infringement.

Even a single new application of a given chemical can now be patented and any approved patent has a lifespan of 70 years beyond the death of the creator. This is Corporatocracy on steroid!

This new reality has raised the bar for every alternative therapist to not only improve their craft, but should also help in the spread of awareness about safer healthcare alternatives to drugs to as wider audience as possible.

As far as eClinik Learning is concerned, all drugs are already obsolete.

The intellectual property chapter indicates new restrictions on generic drugs, which are much less expensive than drugs made by patent holders within the pharmaceutical industry.

The leaked documents are dated October 5, the same day the 12 participating nations ‒ including the United States, Mexico, Canada, Japan and Vietnam ‒ announced a deal had been struck in secret between trade negotiators. The full text of the Trans-Pacific Partnership (TPP) will not be released to the public until after October 19, WikiLeaks noted, the date of the Canadian federal election.

“The finalized chapter would require all countries eventually to conform to every pharmaceutical patent rule in the TPP, regardless of any individual country’s wealth (or lack thereof) or level of development,” Public Citizen, a government transparency group, wrote in an expert analysis of the leaked documents.

“If adopted, the rules will delay generic and biosimilar competition, making the medicines upon which people depend to stay alive expensive  for longer and, as a consequence, unobtainable.”

The intellectual property (IP) rules relating to pharmaceuticals demand that nations will have different transition periods by which they must implement the terms of the agreement.

Public Citizen said in the analysis that with some “limited exceptions,” all participating TPP nations, no matter their level of poverty, must comply with the TPP’s pharmaceutical IP rules after an as-yet-to-be-determined transition period.

“There is little reason to believe that these rules would actually be good for the people residing in TPP countries, even after the transition periods allowed,” the group wrote. “Indeed, even in the U.S., where similar rules are already in place, the high prices of medicines – bolstered by TPP-style monopolistic protections – have led to treatment rationing, prescriptions going unfilled and severe budgetary strains.”

The intellectual property chapter is one of the most contentious sections of the controversial TPP, which has been negotiated in secret for the last five-and-a-half years.

READ MORE:  What is the Trans-Pacific Partnership and why you should care

“If TPP is ratified, people in the Pacific-Rim countries would have to live by the rules in this leaked text,” said Peter Maybarduk, Public Citizen’s Global Access to Medicines Program Director. “The new monopoly rights for big pharmaceutical firms would compromise access to medicines in TPP countries. The TPP would cost lives.”

Earlier this week, New Zealand, one of the 12 nations involved in the TPP negotiations, revealed that the section dealing with intellectual property almost aligns perfectly with how copyright law is handled within the US, meaning copyrights will last for 70 years beyond the death of the creator rather than 50 years.

New Zealand said the provision would cost NZ$55 million per year. Michael Geist, law professor at the University of Ottawa, said the cost will be deeper for a much larger nation like Canada, which, he said, has “agreed to significant changes to Canadian copyright law without an opportunity for public comment or discussion.”

In the TPP draft, he wrote, Canada “has increased the criminalization of copyright, adding new criminal liability for the removal of “rights management information” (rules associated with Canada’s controversial protection of digital locks) and it has expanded restrictions on the importation or distribution of goods whose rights management information has been altered. It has expanded border measures rules (just months after passing legislation on the issue), by agreeing to notification system on suspect in-transit shipments that will not even enter Canada.”

Robert Weissman, president of Public Citizen, said this week that the TPP “is a collection of provisions that amount to a wish list for giant multinational corporations,” and that the Office of the US Trade Representative, the American agency involved in negotiations, “was willing to hold up the entire deal to try to extract more concessions for Big Pharma.”

Corporate America was certainly in on the terms of negotiations, unlike the public, which has been blocked from seeing the pact’s provisions, he added.

“As a result, we have a deal that comes out that prioritizes the needs and demands of multinational corporations, gives them special rights, gives them special powers, and entrenches a failed development model and a failed trade model, which we can reasonably call NAFTA (North American Free Trade Agreement) on steroids,” Weissman said.

US officials have insisted that the TPP will boost American businesses and workers. Opponents counter, though, pointing out that leaked documents have indicated that the deal is a consolidation of power and not a benefit for the working class. Labor unions, among many others, have lined up to oppose the TPP based on concerns over a number of issues, including environmental and health protections, food safety, pharmaceutical monopolies, offshoring of jobs and internet privacy.

The deal has also been criticized for its lack of transparency, as the contents of the TPP have been kept in strict secrecy. Leaked drafts of TPP negotiations have suggested that corporations would be allowed to sue governments in private courts over lost profits due to regulation, elevating corporate entities to the status held by sovereign nations.

Participating nations must now approve the TPP draft as is, presented to them by their respective trade officials. In the US, members of Congress, who have had only restricted access to the TPP’s details, must now vote simply for or against the deal without the ability to modify its terms.

Understand further that this is not a battle between countries. This is a war between Big Corporations, or monopolies, against all races around the globe. This is, after all, an elaborate measure precisely to “thin the herd”, or to eliminate the “useless eaters”, because the Eugenics Movement did not stop decades ago. They just went “underground” under the cloak of Corporatocracy.

In a saner society, basic needs should not be subjected to any economic principles. It should be provided for free by default by the State, or the people should be able to provide for themselves without any difficulty, e.g. everyone should have access to farm lots and only those luxury items should be subjected to taxes.

The Republic has been hijacked by the Bankers / Globallists / Corporatists and the people are just shouting about it.

We are profoundly “institutionalized” and still far from being civilized.