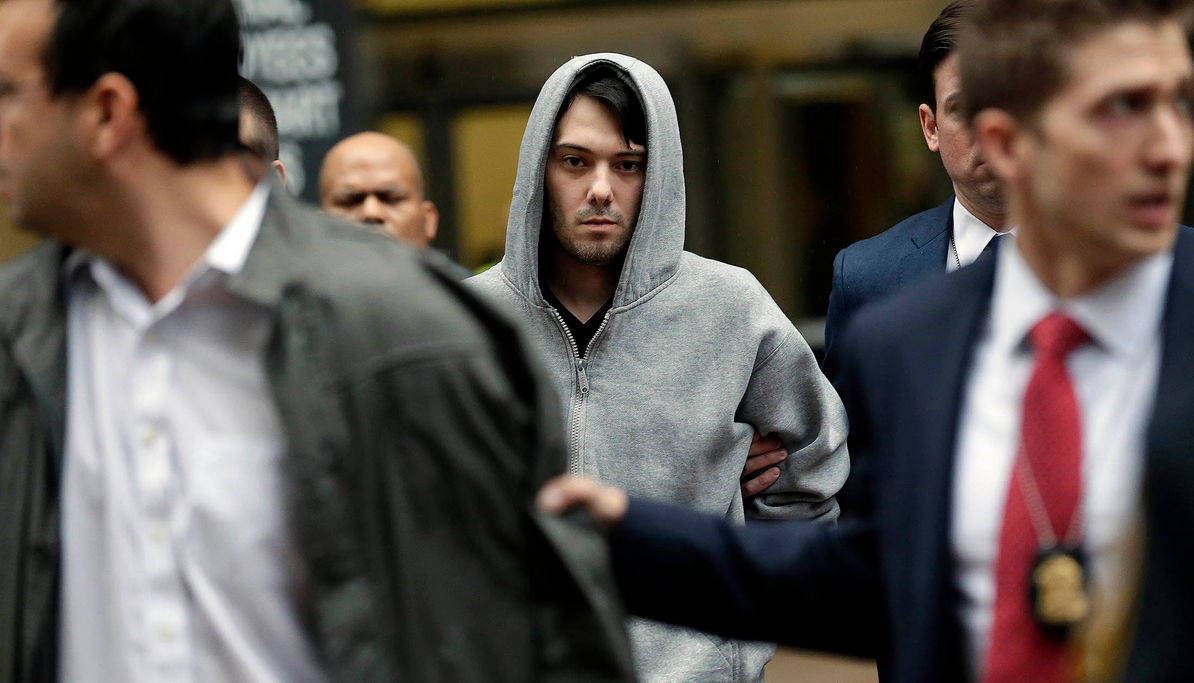 Five days ago, Martin Shkreli, the pharmaceutical CEO was arrested on securities fraud charges. He is labeled in the mainstream media as the “Wolf of Pharma Street” when he acquired rights to an old drug and raising its price to as much as 5000%!

But, is he the only drug peddler that must be arrested?

“Disdaining a business model dependent on expensive research and development, companies like Shkreli’s Turing Pharmaceuticals AG, Valeant Pharmaceuticals International Inc., Rodelis Therapeutics and others have taken advantage of inefficiencies in the U.S. health-care system. Old drugs can be sold at much higher prices if the owner is willing to push the boundaries of what the market will bear. Turing, for example, took a decades-old drug, Daraprim, and raised the price to $750 a pill from $13.50.

Shkreli was arrested Thursday in New York on charges related to hedge funds he ran and his old drug company Retrophin Inc. He has denied the charges, which aren’t related to drug pricing. Turing declined to comment. The company announced Friday that Shkreli has resigned as CEO.

“Shkreli has become the Wolf of Pharma Street — he’s basically come to represent everything that was bad and wrong with pharma,” Art Caplan, a medical ethicist at New York University, said by phone. And while Shkreli may be reviled, said Caplan, “he’s not doing anything in terms of prices that other companies haven’t done.”

Caplan is right. The infamous Wolf on Pharma Street has done nothing that Big Pharma is not doing ever since, and he is not the only wolf in the pharmaceutical industry. In fact, he is just a pup in the whole pack, a sacrificial lamb to paint the picture that the regulators are indeed doing something.

The TRUE Cost of Your Prescription Drugs!

The chart below speaks for itself.

Since the cost of prescription drugs is so outrageous, I thought everyone I knew should know about this. Please read the following and pass it on. It pays to shop around. This helps to solve the mystery as to why they can afford to put a Walgreen’s on every corner.

On Monday night, Steve Wilson, an investigative reporter for Channel 7 News in Detroit, did a story on generic drug price gouging by pharmacies. He found in his investigation, that some of these generic drugs were marked up as much as 3,000% or more. Yes, that’s not a typo … three thousand percent! So often, we blame the drug companies for the high cost of drugs, and usually rightfully so. But in this case, the fault clearly lies with the pharmacies themselves. For example, if you had to buy a prescription drug, and bought the name brand, you might pay $100 for 100 pills. The pharmacist might tell you that if you get the generic equivalent, they would only cost $80, making you think you are “saving” $20. What the pharmacist is not telling you is that those 100 generic pills may have only cost him $10!

At the end of the report, one of the anchors asked Mr. Wilson whether or not there were any pharmacies that did not adhere to this practice, and he said that Costco, Sam’s Club and other discount volume stores consistently charged little over their cost for the generic drugs. I went to the the discount store’s website, where you can look up any drug, and get its online price. It says that the in-store prices are consistent with the online prices. I was appalled. Just to give you one example from my own experience, I had to use the drug, Comparing, which helps prevent nausea in chemo patients. I used the generic equivalent, which cost $54.99 for 60 pills at CVS. I checked the price at Costco, and I could have bought 100 pills for $19..89. For 145 of my pain pills, I paid $72.57. I could have got 150 at another discount store for $28.08. I would like to mention, that although these are a “membership” type store, you do NOT have to be a member to buy prescriptions there, as it is a federally regulated substance. You just tell them at the door that you wish to use the pharmacy, and they will let you in. (This is true, I went there this past Thursday and asked them.)

I am asking each of you to please help me by copying this letter, and passing it into your own email, and send it to everyone you know with an email address.

The big players in the game are not letting up yet. In fact, they are consolidating their forces to subvert antagonistic legislation and continue to poison the masses worldwide.

The DuPont and Dow Chemical Merger: Bad Deal for People and the Planet

Watchdog groups are sounding the alarm after two of the oldest and largest corporations in the United States—DuPont and Dow Chemical—announced Friday plans to merge into a $130 billion giant, thereby establishing the world’s biggest seed and pesticide conglomerate.

The new behemoth, named DowDuPont, would then be split into “three independent, publicly traded companies through tax-free spin-offs,” according to a joint corporate statement marking one of the the largest deals of 2015.

These companies would focus on agriculture, material science, and “technology and innovation-driven Specialty Products company,” the statement continues. Together, they would form the second-largest chemical company world-wide.

The merger, if it goes through, is expected to slash numerous jobs.

And it would expand the influence of two Big Ag players, with the combined venture retaining control over “17 percent of global pesticide sales and about 40 percent of America’s corn-seed and soybean markets,” according to the calculations of Washington Post analysts.

Rights groups warn that this large share would be very bad for people and the planet—and called on the Department of Justice to block the merger.

“The Department of Justice needs to block this merger to prevent the further corporate control of the basic building blocks of the food supply.”
—Wenonah Hauter, Food & Water Watch

“Just a handful of large chemical companies including Dow and DuPont already control most of the seed supply used to grow crops like corn and soybeans, as well as the herbicides that genetically engineered seeds are designed to be grown with,” said Wenonah Hauter, executive director of advocacy organization Food & Water Watch, in a statement released Friday.

“Any merger that consolidates this market into fewer hands will give farmers fewer choices and put them at even more economic disadvantage,” Hauter continued. “And it will make it harder for agriculture to get off the GMO-chemical treadmill that just keeps increasing in speed. The Department of Justice needs to block this merger to prevent the further corporate control of the basic building blocks of the food supply.”

According to the New York Times, “Despite the eventual breakup, the deal would undergo rigorous antitrust scrutiny for all three companies, particularly the agricultural chemicals company.”

Diana Moss, president of the American Antitrust Institute, confirmed Friday that “any merger on the agricultural inputs side of DuPont and Dow will get antitrust scrutiny.”

Nonetheless, watchdog groups warn that the merger announcement is a bad sign, in an industry that has already undergone dramatic consolidation.

“Some of the markets for biotech and seeds are highly concentrated, which has been driven by Monsanto having made so many acquisitions in the past. If you put a new merger in the this mix, it’s going to raise concerns about leaving only two or maybe three firms,” Moss explained. “Farmers could be squeezed even more and consumers could pay higher prices.”

Robert Reich, University of California at Berkeley professor and former Secretary of Labor, took to social media to warn that the merger would result in greater political power for the corporation, as well as “higher prices for you for food and a variety of other products.”

“Crop prices continue to drop, so the only way these giant companies can increase earnings is by increasing their market power to raise prices (Monsanto is also on the prowl to buy a Big Ag or chemical company),” Reich continued. “That means more of your paycheck will be going to them, directly or indirectly.”

It pays to take necessary measures against the bigger wolves.