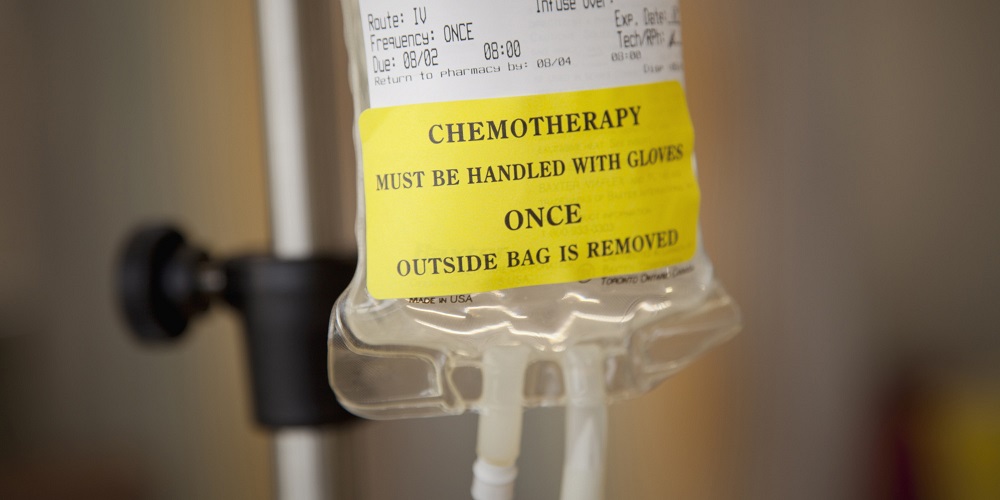 There must be a very compelling reason why a bag of chemotherapy must be handled with gloves.

No doubt about it, the cytotoxic drugs used in cancer chemotherapy are hazardous. They work by disrupting the growth and reproduction of cancer cells. Unfortunately, that action often afflicts certain healthy cells as well, causing toxic side effects in the patients who receive chemotherapy and posing health risks to the nurses who administer it without taking protective measures…

Accidental exposure to such agents can occur in several ways: by direct absorption of a drug through the skin; by ingestion while eating or drinking after hand contact with a drug; and by inhalation of airborne droplets…

The development of secondary malignancies such as leukemia, bladder cancer, and lymphoma is well documented.”

“As a chemist trained to interpret data, it is incomprehensible to me that physicians can ignore the clear evidence that chemotherapy does much, much more harm than good.”

Aside from the above precautionary introduction, there are empirical factors showing that chemotherapy should not be part of one’s menu when dealing with cancer and other severe maladies, that even the experts are not willing to subject themselves to it…

The great lack of trust is evident even amongst doctors. Polls and questionnaires show that three doctors out of four (75 per cent) would refuse any chemotherapy because of its ineffectiveness against the disease and its devastating effects on the entire human organism. This is what many doctors and scientists have to say about chemotherapy:

“The majority of the cancer patients in this country die because of chemotherapy, which does not cure breast, colon or lung cancer. This has been documented for over a decade and nevertheless doctors still utilize chemotherapy to fight these tumors.”

“If I were to contract cancer, I would never turn to a certain standard for the therapy of this disease. Cancer patients who stay away from these centers have some chance to make it.”

“Dr. Hardin Jones, lecturer at the University of California, after having analyzed for many decades statistics on cancer survival, has come to this conclusion: ‘… when not treated, the patients do not get worse or they even get better’. The unsettling conclusions of Dr. Jones have never been refuted.”

“Many oncologists recommend chemotherapy for almost any type of cancer, with a faith that is unshaken by the almost constant failures.”

“Our most efficacious regimens are loaded with risks, side effects and practical problems; and after all the patients we have treated have paid the toll, only a miniscule percentage of them is paid off with an ephemeral period of tumoral regression and generally a partial one.”

“After all, and for the overwhelming majority of the cases, there is no proof whatsoever that chemotherapy prolongs survival expectations. And this is the great lie about this therapy, that there is a correlation between the reduction of cancer and the extension of the life of the patient.”

“Several full-time scientists at the McGill Cancer Center sent to 118 doctors, all experts on lung cancer, a questionnaire to determine the level of trust they had in the therapies they were applying; they were asked to imagine that they themselves had contracted the disease and which of the six current experimental therapies they would choose.

79 doctors answered, 64 of them said that they would not consent to undergo any treatment containing cis-platinum – one of the common chemotherapy drugs they used – while 58 out of 79 believed that all the experimental therapies above were not accepted because of the ineffectiveness and the elevated level of toxicity of chemotherapy.”

“Doctor Ulrich Able, a German epidemiologist of the Heidelberg Mannheim Tumor Clinic, has exhaustively analyzed and reviewed all the main studies and clinical experiments ever performed on chemotherapy …. Able discovered that the comprehensive world rate of positive outcomes because of chemotherapy was frightening, because, simply, nowhere was scientific evidence available demonstrating that chemotherapy is able to ‘prolong in any appreciable way the life of patients affected by the most common type of organ cancer.’

Able highlights that rarely can chemotherapy improve the quality of life, and he describes it as a scientific squalor while maintaining that at least 80 per cent of chemotherapy administered in the world is worthless. Even if there is no scientific proof whatsoever that chemotherapy works, neither doctors nor patients are prepared to give it up (Lancet, Aug. 10, 1991). None of the main media has ever mentioned this exhaustive study: it has been completely buried.”

“According to medical associations, the notorious and dangerous side effects of drugs have become the fourth main cause of death after infarction, cancer, and apoplexy.”

A team from New York’s University of Rochester found several types of key brain cell were highly vulnerable to the drugs.

They say it might help explain side effects such as seizures and memory loss associated with chemotherapy – collectively dubbed “chemo” brain. The research, on mice, is published in the Journal of Biology.

Drug therapy for cancer can prompt a wide range of neurological side effects, even the onset of dementia. But they were thought not to be directly linked to the drug treatment itself. Instead, some doctors have put them down to the patient’s vulnerable psychological state.

The latest study found that dose levels typically used when treating patients killed 40% to 80% of cancer cells – 70% to 100% of brain cells. Several types of healthy brain cell continued to die for at least six weeks after exposure.

All three drugs were toxic to several types of brain cell whose job is to repair other cells in the brain – even at very low concentrations. They also killed off oligodenrocyte cells, which play a key role in the transmission of messages around the nervous system.

The researchers suggest damage to cells in the hippocampus, which is responsible for memory and learning, is most likely to explain chemo brain symptoms. Professor John Toy, Cancer Research UK’s medical director, said:

“The doses of therapy needed to treat cancer while leaving the body’s healthy cells as unharmed as possible is a fine balance judged by experienced specialists.

They aim to maximise benefits and minimise damage. Unfortunately side-effects can include toxicity to the brain. “

This research in mice may hopefully suggest new ways of researching how this toxicity might be overcome.

“It is important to remember, however, that all presently available cancer treatments have gone through extensive clinical trials to ensure that their benefits outweigh unwanted effects. “No patient should stop their treatment because of this research.”

The researchers said it might be possible to add protective agents to chemotherapy drugs. They also suggest further work to pinpoint which cells are most at risk.”

BBC UK
Instead of relying on the expensive results of corporate medical research that is always below our minimum expectations, why don’t we start asking about other non-chemical options to curing cancer and all other diseases?

3 thoughts on “Why You Should Refuse Chemotherapy”