Alzheimer’s disease is almost unheard of in the Philippine countryside until radio broadcast talked about it in the 1980s. Old farmers were still tending on their farms with clear eyesight and active mental faculties.

They were still doing farm with manual tools and a help from farm workhorse like water buffalo, or carabao. But they could still talk straight at 70s. The only explanation is what’s on their diet.

They love to cook mongo mixed with a handful of dilis (a dried small fish named Stolephorus commersonii) in a soup of coconut milk.

They claimed that this soup can give them extra energy to survive a given day’s work. The same viand is also a standard issue for larger farm workers during harvest season.

This writer had seen his own great grandmother still alive at between 125 to 130 years, in the 70s. Nobody then was so sure about her exact age. Age was a non-issue in those times.

The many concerns about aging only became a great source of noise when large grocery stores started to prop up in the peripheral islands. Before then, the subject was only prevalently discussed in urban centers where hypertension and stroke was fast becoming the norm.

The once common recipe of moringa in a coconut oil soup was gradually replaced with instant noodles and readily available canned meat substitutes. And they wonder where they got all these symptoms of increasing body weight and borderline blood pressure.

The doctors, of course, were happy to relocate to highly populated areas – that’s where the market for their services is high. The doctor choosing to serve a village in the Philippines is considered a hero. He needs to financially survive with few customers and a commanding competition from the religious quacks, i.e. faith healers. He could enter politics.

The self-proclaimed experts continue to call coconut as a “chock-full of saturated fat – a known culprit in raising heart disease risk.” That’s a superloaded single statement which summarizes how the lies and deception are perpetrated in the medical and food industry.

He said there are two types of LDL: One small and dense, while the other is large and soft. The large LDL is the type used in making bile, hormones and vitamin D, which are all good for one’s health. Fife further concluded,

“Eating coconut oil [and other saturated fats] increases both HDL and the ‘good’ LDL, thus lowering the risk of heart disease. This is one of the reasons populations that eat a lot of coconut oil have the lowest heart-disease rates in the world.”

So, what are you saying really, Dr. Fife?

Detailed comparison of the fatty-acid composition shows coconut oil is very different from animal fat. Hence, studies that assume they are similar are consequently in error, Dayrit added.

As opposed to Dr. Fife, Dr. Fabian Dayrit made an extensive research on the subject, and proved that coconut oil is unlike any other sources of fat.

A certain study done by Jose Enrique de la Rubia, “although preliminary, demonstrated the positive influence of coconut oil at the cognitive level of patients with Alzheimer’s, this improvement being dependent on sex, presence or absence of diabetes and degree of dementia.” 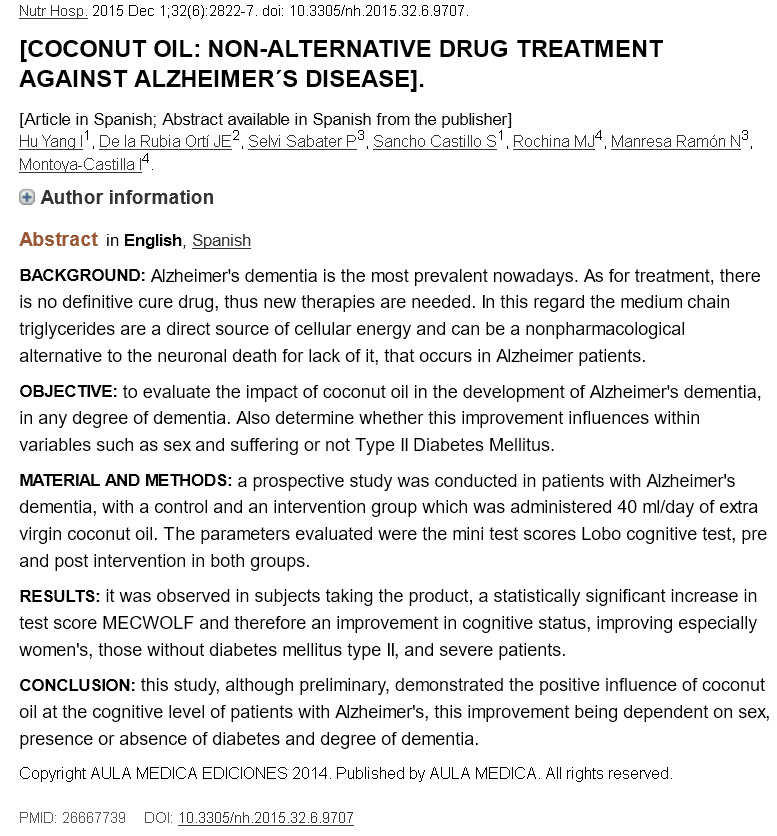 This is on top of the personal experience of Dr. Mary Newport when she cured her own husband, who was suffering from a “progressive dementia for at least five years.”

It is inconceivable that a potential dietary prevention and cure for Alzheimer’s disease, and other neurodegenerative diseases, has been out there for so many years, and yet has gone unnoticed.  It is very likely that these diseases are becoming more prevalent due our current diet.

The American diet has changed drastically from what it was before the 1950’s,  when  our  parents  and  grandparents  used lard  and  coconut  oil  to  cook.  Cardiovascular disease was rare at the beginning of the 20th century, and has skyrocketed, along with other devastating diseases, such as Alzheimer’s, diabetes type II, obesity, since mass produced hydrogenated vegetable oils containing trans fats were introduced into our diets  and  replaced  these  other  natural  fats.

Sadly, the incidences of cardiovascular and other serious diseases are becoming more and more common among people in other areas of the world who have changed over from their indigenous foods to the “western” diet.”

The old farmers mentioned in our introduction were not suffering from any heart failures, nor from losing their eyesight and their minds.

You just have to raise your decibels whenever conversing with some of them, who may have problems with their hearing. They said that it has to do with extreme physical exertions related to their job. Not all of them have the luxury of owning a carabao.