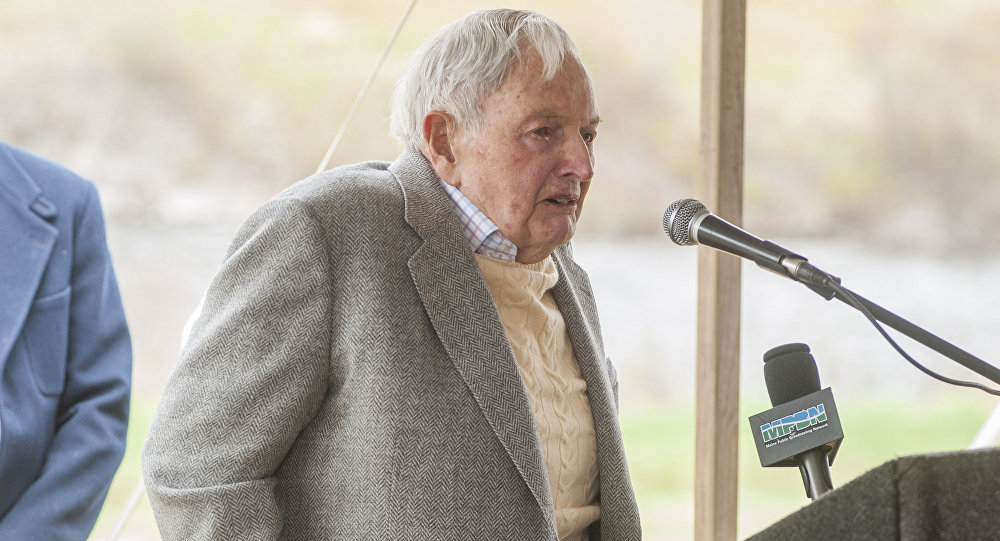 The most highly anticipated death of eugenicist David Rockefeller happened when his newly transplanted heart failed this time around.

No sir, you won’t be missed.

In the statement from the Rockefeller Foundation, David Rockefeller described as “one of the most influential figures in the history of American philanthropy and finance.”

Rockefeller was the last surviving grandson of John D. Rockefeller who founded the Standard Oil Company in the 19th century and built a fortune that made him America’s first billionaire, the statement added.

​David Rockefeller was born in New York City on June 12, 1915. Since 2004, he was the family patriarch and the oldest living member of the Rockefeller family.

Rockefeller graduated from Harvard in 1936 and received a doctorate in economics from the University of Chicago in 1940. He served in the Army during World War II, then began climbing the ranks of management at Chase Bank. That bank merged with The Manhattan Company in 1955.

He died of congestive heart failure in his sleep at home in Pocantico Hills. A family spokesman, Fraser P. Seitel, confirmed the death.

Wait, was it really the failure of his 7th heart transplant?

The Rockefeller Foundation owns the patent to the Zika virus, and has interests on the entire bioweapons of mass death enterprise, together with the Bill and Melinda Gates Foundation.

David Rockefeller saw the proliferation of fake news even before the phrase became an everyday byword.

“We are grateful to the Washington Post, the New York Times, Time Magazine and other great publications whose directors have attended our meetings and respected their promises of discretion for almost 40 years……

It would have been impossible for us to develop our plan for the world if we had been subjected to the lights of publicity during those years.

But, the world is more sophisticated and prepared to march towards a world government. The supernational sovereignty of an intellectual elite and world bankers is surely preferable to the national autodetermination practiced in past centuries.” ― David Rockefeller

The Rockefeller Foundation wields enough power to influence not just the mainstream media, but the entire educational, medical and political system of the West. It has a controlling interest in the American Medical Association, and has provided the real estate where the United Nations General Assembly is now sitting on.

According to mainstream Wikipedia, its activities have included:

Some of its infamous activities include:

That’s just a sampler by the way.

Then, consider how the “authoritative” publication and statements coming out from those “institutions” shaped the government policies of the day.

“For more than a century ideological extremists at either end of the political spectrum have seized upon well-publicized incidents such as my encounter with Castro to attack the Rockefeller family for the inordinate influence they claim we wield over American political and economic institutions. Some even believe we are part of a secret cabal working against the best interests of the United States, characterizing my family and me as ‘internationalists’ and of conspiring with others around the world to build a more integrated global political and economic structure–one world, if you will. If that’s the charge, I stand guilty, and I am proud of it.” ― David Rockefeller