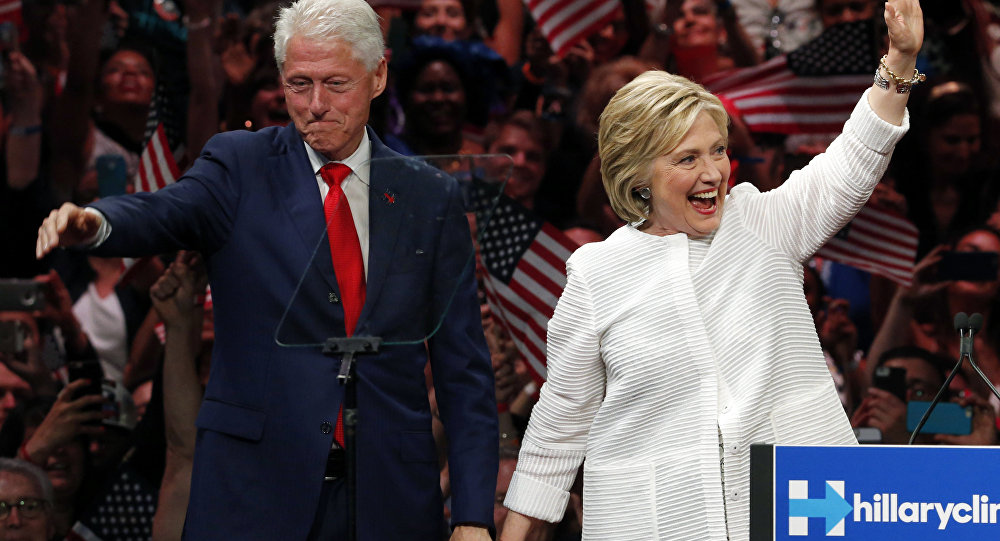 On March 23, the GMHC, an AIDS service organization, is due to honor former President Bill Clinton, the founder of the Clinton Foundation, for his 15-year effort to battle HIV/AIDS. Speaking to Sputnik, Wall Street analyst Charles Ortel disclosed what really lay behind the charity’s HIV/AIDS initiative. Do the Clintons deserve so much praise?

On Thursday, March 23, a New York City-based non-profit AIDS service organization, the GMHC (formerly Gay Men’s Health Crisis), is due to honor Bill Clinton, the founder of the Clinton Foundation and the 42nd President of the United States for “battling the epidemic since 2002” and “saving the lives of people living with HIV/AIDS worldwide.”

However, according to Charles Ortel, a Wall Street analyst who exposed financial fraud at General Electric back in 2007, “there is no evidence that can be verified that the ‘international’ charity ever lawfully provided any help to victims of HIV/AIDS anywhere.”

… the Clinton Foundation’s HIV/AIDS initiative, Ortel revealed that not only were the Foundation’s efforts to fight the deadly virus never lawfully organized, but the charity could have also been involved in the distribution of adulterated antiretroviral (ARV) drugs.

In light of this the question arises: what then was the Clintons’ initiative all about?

To answer the question one should take a look at a role the charity played in a United Nations-sponsored program that uses levies on airline tickets to help HIV/AIDS victims in developing countries.

Back in 2015 Charles Ortel exposed the scheme which was potentially used by the Clinton Foundation to defraud air travelers.

“Starting next January, whenever you buy an airline ticket at a travel agency or online, there’ll be a new question to answer before you hand over your credit card: Would you be willing to donate $2 to help fight HIV/AIDS, malaria and tuberculosis in Africa?” Time Magazine reported on September 18, 2009.

It was rather predictable that the answer would be positive, especially when one found out that the scheme, kicked off by the small UNITAID agency, was backed by “the travel industry and heavyweights of international aid such as the William J. Clinton Foundation and the Bill and Melinda Gates Foundation.”

However, besides the heavyweights, the program also involved Ranbaxy Laboratories LTD, a controversial Indian pharmaceutical company which later pleaded guilty in manufacturing inefficient and sometimes even toxic adulterated ARVs.

In his 2015 interview with Jerome R. Corsi of World Net Daily (WND) Ortel pointed out that it was shrouded in secrecy how much money exactly the charity received from UNITAID and spent on its HIV/AIDS efforts from 2006 through 2013. The Wall Street analyst assumed that the Clintons had cashed in on the multi-million dollar program.

For example, he drew attention to the fact that the 2013 Clinton Foundation Annual Report brochure listed CHAI program expenditures as $127.8 million “while a detailed analysis of consolidated financial reports show CHAI’s actual program expenditures were just $99.1 million, a discrepancy of $28.7 million.”

“the Clintons have defrauded an unsuspecting international public of hundreds of millions of dollars for personal gain.”

US President Bill Clinton (L) and presidential advisor Ira Magaziner (R) greet guests during an electronic commerce event 01 July at the White House in Washington, DC on July 1, 1997. Clinton hosted the event which promotes commerce on an international scale using the internet

Speaking to Sputnik, Ortel recalled that “by September 2006, a multilateral aid organization called UNITAID was organized in Geneva Switzerland and funded mostly by governments (France, UK, Spain, Norway, South Korea and others) and the Gates Foundation.

“The Financial Reports show that the Government of France was the main supporter of UNITAID and that the Clinton Foundation HIV/AIDS Initiative was a prime beneficiary of financial support from UNITAID, especially from 2006 through 2009, when this entity received about half of all support provided by UNITAID (around $300 million for CHAI),” the Wall Street analyst told Sputnik.

However, there is yet another controversy in this story, he noted.

“According to other records available in the public domain, CHAI was actually liquidated with effect from 31 December 2005 and the Commonwealth of Massachusetts (where CHAI was headquartered) involuntarily revoked authority to operate effective 31 December 2007 so it is quite surprising that UNITAID channeled so much financial support between late 2006 and 2009 and even more surprising that neither UNITAID nor its donors sought to obtain refunds of sums donated to what seems to have been an illegally organized and operated ‘charity,'” Ortel highlighted.

What is worse, these sponsors and officials had never asked any questions regarding the actual spending of the funds by the Clintons’ charity.

“Given the vast international spread and activities and international support for the Clinton Foundation, and the fact that there is no empowered international regulator of any charity, I think it is past time for taxpayers in nations like Australia, Norway, Canada, Ireland, France, Sweden, Switzerland, Spain, Korea and the United Kingdom (to pick just a few) to demand explanations concerning what the Clinton Foundation may have done with their substantial collective contributions ‘fighting HIV/AIDS’ from July 2002 forward,” Ortel told Sputnik.

Speaking to Dady Chery, News Junkie Post Co-Editor in Chief and DadyChery.org editor, in January 2016, Ortel dubbed the Clintons a “Robin Hood in Reverse,” explaining that the influential American clan benefitted from their well-known HIV/AIDS initiative and Haiti recovery efforts by redistributing the wealth intended for the poor to the rich.

“It is almost universally unacceptable to prey on the weak of one’s own species. There are laws and religious precepts against this in every human culture,” Chery wrote, calling attention to the fact that the Clintons had no scruples preying on the suffering of Caribbean and African nations.

So, for what exactly is the GMHC honor Bill Clinton?