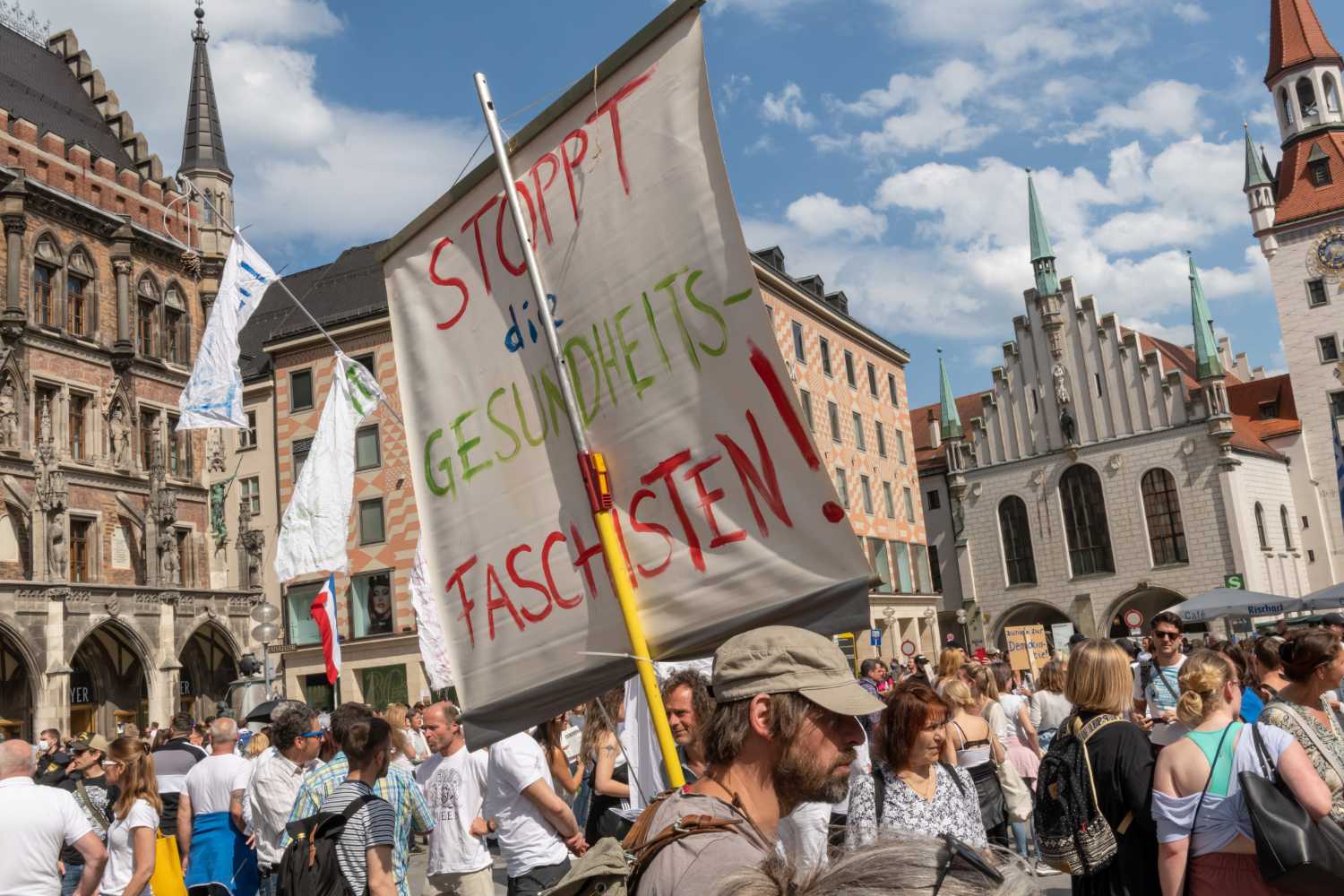 Germany’s federal government and mainstream media are engaged in damage control after a report that challenges the established Corona narrative leaked from the interior ministry.

Some of the report key passages are:

So far, so bad. But it gets worse.

The report focuses on the “manifold and heavy consequences of the Corona measures” and warns that these are “grave”.

More people are dying because of state-imposed Corona-measures than they are being killed by the virus.

The reason is a scandal in the making:

Berlin in Denial Mode. The scientists fight back.

Initially, the government tried to dismiss the report as “the work of one employee”, and its contents as “his own opinion” – while the journalists closed ranks, no questions asked, with the politicians.

But the 93-pages report titled “Analysis of the Crisis Management” has been drafted by a scientific panel appointed by the interior ministry and composed by external medical experts from several German universities.

The report was the initiative of a department of the interior ministry called Unit KM4 and in charge with the “Protection of critical infrastructures”.

This is also where the German official turned whistleblower, Stephen Kohn, work(ed), and from where he leaked it to the media.

The authors of the report issued a joint press release already on Mai 11th, berating the government for ignoring expert advise, and asking for the interior minister to officially comment upon the experts joint statement:

“Therapeutic and preventive measures should never bring more harm than the illness itself. Their aim should be to protect the risk groups, without endegearing the availibilty of medical care and the health of the whole population, as it is unfortunately occurring”

“We in the scientific and medical praxis are experiencing the secondary damages of the Corona-measures on our patients on a dialy basis.”

“We therefore ask the Federal Ministry of the Interior, to comment upon our press release, and we hope for a pertinent discussion regarding the [Corona] measures, one that leads to the best possible solution for the whole population”

At the time of writing, the German government had yet to react.

But the facts are – sadly – vindicating the medical experts’ worries.

Inside, a aeading medical doctor warns that “we will feel the side-effects of the Corona crisis for years”.

Shooting the Whistleblower. Ignoring the Message.

As Der Spiegel reported on Mai 15th: “Stephen Kohn [the whistleblower] has since been suspended from duty. He was advised to obtain a lawyer and his work laptop was confiscated.”

Kohn had originally leaked the report on May 9th to the liberal-conservative magazine Tichys Einblick one of Germany’s most popular alternative media outlets.

News of the report went mainstream in Germany during the second week of Mai – but already in the third week media and politicians alike stopped discussing the issue by refusing to comment upon it.

Emblematic was the approach taken by Günter Krings, the representative for Interior Minister Horst Seehofer – the whistleblower’s boss:

Asked it he would treat the document seriously, Krings replied:

“If you start analyzing papers like that, then pretty soon you’ll be inviting the guys with the tin foil hats to parliamentary hearings.”

Men in tin foil hats – Aluhut in German – is a term used to describe people who believe in conspiracy theories.

Indeed one article by Der Spiegel adressing the Corona protest movement and the consequences of the leaked report contained the word “conspiracy” no fewer than 17 times!

And no discussions of the issues raised by the report itself.

Outside Germany the news has virtually gone unreported.

The Protest Movement – or “Corona-Rebellen”.

Germans begun demonstrating against Lockdowns as early as April.

And thousands of citizens keep showing up at demos every week-end, even as the government is easing the restrictions.

The demos are not merely against restrictions, which have actually been comparatively mild compared to many other Western countries.

The demos question the entire Corona Narrative, and even more its principals, especially the role Bill Gates is playing, as the WHO second biggest donor (the first one since Trump suspended U.S. contribution).

Indeed the biggest such demos took place in Stuttgart on May 9th, where tens of thousands people assempled to say no – to the NWO.

Germans are saying no to any orwellian solution the government might one day impose out of a questionable “emergency status”, from mass surveillance Apps to mandatory vaccinations.

The leaked report has proved their fears to be well founded.

At least as far as the fake nature of the “Corona pandemic” is concerned.

“We, with astonishment, the doctors and scientists involved in the preparation of the aforementioned corona study take cognizance of the press release of the Federal Ministry of the Interior (BMI) from May 10 [which states the following]:

“BMI employees disseminate private opinion on corona crisis management –elaboration was carried out outside of responsibility and without a mandate and authorization.”

The Ministry writes in this press release:

“To the best of our knowledge, the drafting has also involved third parties outside the BMI.”

Our comments on this are as follows:

We assume that the BMI has a great interest in ensuring that its specialists, who are entrusted with the extremely important task of recognizing critical developments and averting damage to Germany through timely warnings, act both on a specific order and on their own initiative. The relevant employee of the BMI contacted us when preparing the risk analysis to assess the medical collateral damage caused by the “corona measures.”

Supported by responsibility, we support the committed BMI staff in examining this essential question to the best of their knowledge and belief, in addition to our actual professional activity. Renowned colleagues, all of them excellent representatives of their field, gave factual statements on specific questions based on the expertise requested. This resulted in a first comprehensive assessment of the medical damage that has already occurred and the threat of it, including expected deaths.

The BMI employee made an assessment based on our work and forwarded the result to the responsible bodies. You can find the relevant document in the attachment to this press release. There is no question that this can only be the beginning of an even more extensive examination due to the short time.But in our opinion, our analysis offers a good starting point for the BMI and the interior ministries of the federal states to carefully weigh the possible benefits of the protective measures against the damage they cause. In our opinion, the addressed civil servants would have to initiate an immediate reassessment of the protective measures based on this paper, for which we also offer our advice.

The BMI clearly states in the press release that it will not take this [our] analysis into account.  It is incomprehensible to us that the responsible Federal Ministry would like to ignore such an important assessment based on extensive technical expertise. Due to the seriousness of the situation, it must be a matter of dealing with the existing factual arguments–regardless of the history of its origin.

Why did the BMI not support the employee’s request and why does the BMI not include the extensive analysis now available on the basis of high-quality external expertise in its assessment of the relationship between the benefits and harm of the corona protective measures?

The BMI continues in its press release:

We ask the BMI:

to tell us in a timely manner how exactly this weighing up is taking place. We ask you to prove this on the basis of data, facts and sources. We would like to compare this with our analysis. In view of the currently sometimes catastrophic patient care, we would be reassured if this analysis leads to a different assessment than ours, which we currently find difficult to imagine.

The BMI also writes that:

“The infection rate in Germany has so far been relatively low in international comparison. The measures taken are effective.”

In accordance with the international specialist literature, we [the undersigned] only partially share this statement regarding the effectiveness of the protective measures. We therefore ask the BMI for transparency:

*to disclose the sources according to which this determination is made.

Overall, at the request of a courageous BMI employee, we have shown the varied and serious undesirable effects of corona protective measures in the medical field, and these are serious. The entire process gives us the impression that, after a certain difficult initial phase of the epidemic, the risks [of government mandates] have not been considered to the necessary extent and, in particular, not in a comprehensive risk assessment. With regard to the reporting on this process, we ask that you place the value of our analysis at the center and report appropriately on us, in office and in person, to the serious situation.

The disease COVID-19 triggered by the coronavirus SARS-CoV-2 is serious for many people in the known risk groups. As with any serious infectious disease, it is important to find the best treatment for the patient and prevent infection routes. But therapeutic and preventive measures must never be more harmful than the disease itself. The aim must be to protect the risk groups without endangering medical care and the health of the general population, as is unfortunately the case right now. We in science and practice as well as many colleagues experience the consequential damage of the corona protective measures to our patients every day. We therefore ask the Federal Ministry of the Interior to comment on our press release and hope for a relevant discussion that will lead to the best possible solution for the entire population with regard to the measures.