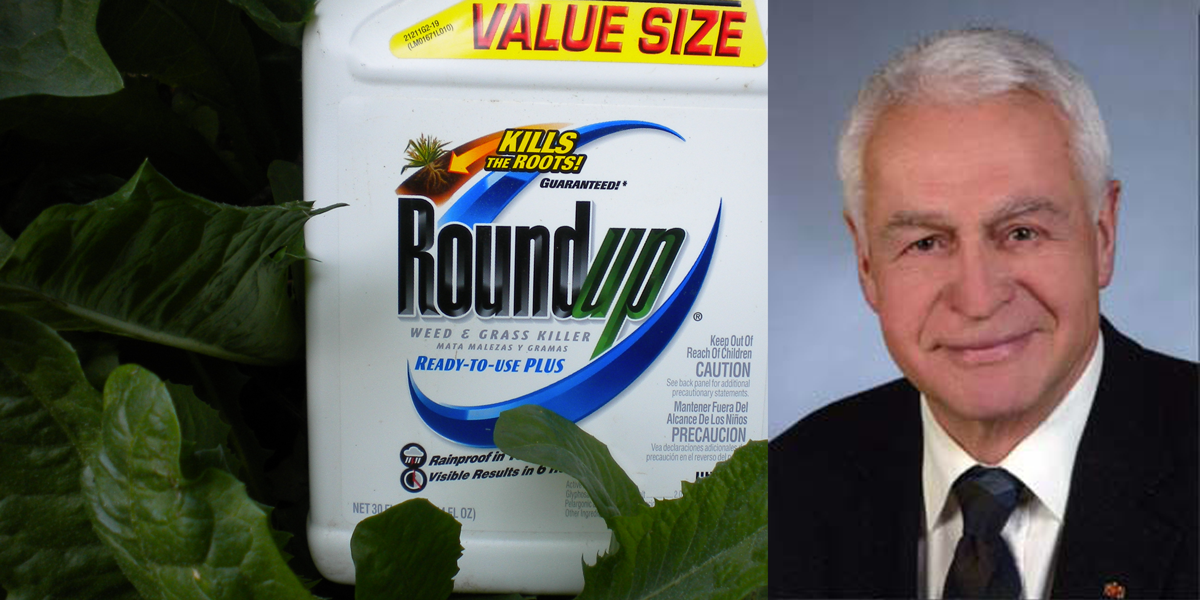 One of France’s leading daily papers, Le Monde, just published an article on how “a group of toxicologists with tenuous expertise and veiled conflicts of interest are working to derail the implementation of European regulations” on endocrine disruptors – synthetic chemicals that are toxic at very low doses.

Chief among the phony experts that the paper suggests are polluting the scientific record is a Monsanto consultant who led the company’s efforts to defend glyphosate via science publications. And Helmut Greim is not the only one of the group currently defending endocrine disruptors to have featured heavily in the debates over the safety of glyphosate and GMOs.

The largest-circulation daily in The Netherlands, De Telegraaf, has also recently highlighted another group of dubious “experts” involved in targeting researchers who point to the potential health hazards of industry products. And curiously enough, this group of commentators also have a history of dismissing the dangers of glyphosate.

In the Le Monde piece, helpfully republished in English by Environmental Health News, Stéphane Horel and Stéphane Foucart describe how a group of nineteen “experts” simultaneously published an identical opinion piece in six different scientific journals dismissing the dangers of endocrine disrupting chemicals (EDCs) and opposing their regulation. This carefully orchestrated publication was timed to coincide with some important decision making that is underway in Brussels on how to develop regulation of these chemicals.

Tufts University biologist Ana Soto, a pioneering expert in the field, dismisses these authors as “self-proclaimed experts with no expertise”. And Linda Birnbaum, a toxicologist who formerly headed the US’s National Institute of Environmental Health Sciences (NIEHS) told Le Monde, “Frankly, I find it inexcusable that the same commentary can be published in [6] different journals.” She believes that each of the minor toxicology journals in question is edited by one or other of the authors of the commentary.

Thomas Backhaus, Professor for Ecotoxicology and Environmental Sciences at the University of Gothenburg in Sweden, has been equally outspoken, tweeting, “The same (politically charged) opinion piece on endocrine disrupting chemicals … published simultaneously in six (!) journals? That’s embarrassing. For the authors, the journal’s editors and the publisher [Elsevier]”. Backhaus calls it “blatant self-plagiarism” that not only pollutes the scientific record but violates “even the most basic ethics of scientific publishing”.

To Backhaus, it “seems as if the authors/editors assume that ‘whoever whines the loudest will win the argument.’ Where are we? In Kindergarten? Recently graduated from Trump University?”

But Backhaus almost certainly underestimates how effective such noisy onslaughts can be. According to Le Monde, this is not the first time that these “experts” have made this kind of carefully timed intervention: “In 2013, a similar initiative by the core group of the same toxicologists contributed to derailing an ongoing EU legislative process and delayed the elaboration of the EDC regulation for several years.”

Such tactics have become increasingly familiar since they were first deployed by scientists working in league with Big Tobacco. And a key ingredient in their success is keeping industry ties concealed.

Thus, even though the 19 toxicologists all avow that they have no conflicts of interest, the Le Monde authors’ investigations led them to conclude, “In total, at least 15 of these 19 scientists have had ties with the chemical, pesticide, fossil fuel or tobacco industries over the course of their careers.”

A good example is the “corresponding author” for the multi-published opinion piece, Helmut Greim. This long-retired professor of toxicology declares no conflicts of interest, despite having been a consultant for the Japanese chemical firm Sumitomo and part of a panel for the US industry lobby group, the American Chemistry Council, as recently as 2019. Greim has also been a member of the scientific committee of Ecetoc, the European scientific think tank of the chemical industry, for nearly 20 years.

But regular readers of GMWatch will know Greim best as a member of the expert panels convened and funded by Monsanto to defend the safety of glyphosate against the verdict of the World Health Organization’s cancer agency IARC that this chemical is a probable human carcinogen. Greim had also prior to that been directly employed as a consultant by Monsanto and in the words of the company, “as part of that consulting relationship, published peer-reviewed data regarding glyphosate” in a paper co-authored with a Monsanto employee.

A year later in 2016, as part of the pushback against the IARC verdict, Greim authored two papers defending glyphosate’s safety that were among a set of five published in the scientific journal Critical Reviews in Toxicology. These, it later emerged, had been so heavily influenced by Monsanto that the journal publisher Taylor & Francis decided to retract three of them, including one co-authored by Greim, because the authors had falsely declared Monsanto had had no involvement in the papers.

That wasn’t the end of the story, however. As Dr Nathan Donley of The Center for Biological Diversity explains,

“The publisher reversed that decision when the editor of Critical Reviews in Toxicology threw a temper tantrum over email.” Donley calls this ghostwriting scandal “One of the most depraved episodes in scientific publishing I have witnessed.”

Long before he took to defending glyphosate, Greim did the same for dioxin and PCBs, substances now accepted as highly toxic. In the case of PCBs, Prof Erich Schöndorf, a former public prosecutor, said of Greim:

“He was a phony expert. He didn’t deserve to be recognised as an ‘expert’ or ‘subject specialist’. He clearly stood on the manufacturer’s side and had nothing to do with impartial scientific methodology.”

Multiple consultancies, no conflicts of interest

Someone else caught up in the Monsanto ghostwriting scandal was the retired pathologist Sir Colin Berry, who was a co-author with Greim of one of the papers Taylor & Francis wanted retracted. He is also one of the co-authors with Greim of the commentary claiming that further study and regulation of the impacts of endocrine-disrupting chemicals is not warranted. Despite declaring no conflicts of interest, Berry has been a consultant for BASF, Bayer, DuPont and Monsanto, according to Le Monde, as well as chairing Syngenta’s “ethics committee” – a paid position.

Berry, as we have previously reported, was also involved in the attacks on Prof Gilles-Eric Séralini’s long-term study showing adverse effects of a GM maize and the glyphosate-based Roundup herbicide on rats. He has also served on the advisory board of Sense About Science, which has been accused of using science to tip the scales towards industry.

There are certain parallels with the group of dubious “experts” highlighted by the investigative journalists Jannes van Roermund and Paul Thacker in their recent De Telegraaf article. These include David Robert Grimes, who, like Berry, “has ties with Sense About Science”. Needless to say, Grimes has declared that there is “no reputable evidence that glyphosate causes cancer” and that “it is extremely irresponsible to state otherwise”, despite IARC – the world’s foremost experts on the issue – classifying glyphosate as probably carcinogenic to humans.

Grimes is among a group of science bloggers that the Dutch article suggests engage in attacks aimed at shaming industry-critical scientists, most recently over 5G. This group includes Alex Berezow, a director of the American Council of Science and Health (ACSH), which is known to have been funded by Monsanto – with one Monsanto executive declaring, “You WILL NOT GET A BETTER VALUE FOR YOUR DOLLAR than ACSH”, and asking the group to help defend glyphosate against IARC.

Also on van Roermund and Thacker’s list are Hank Campbell, a former president of ACSH, and David Zaruk, a former chemical industry lobbyist who blogs as “The Risk-Monger”. Both are extremely controversial figures. Campbell, for instance, has been accused of publishing Nazi eugenic blog posts via his Science 2.0 nonprofit. Zaruk, who, along with Campbell, is one of the officers of Science 2.0, gained his own notoriety for his vicious attacks on the leading US cancer expert Prof Christopher Portier, who was consulted by IARC during its decision making on glyphosate. These attacks deployed a string of epithets that included “demon”, “rat”, “slimeball”, “mercenary”, and even “little shit”.

Van Roermund and Thacker quote Professor Ton Hol, chairman of the Committee on Scientific Integrity of the Universities of Utrecht and Tilburg, as saying that the way such science bloggers attack and ridicule critical scientists, despite themselves lacking real expertise, “is very worrying. This gives the audience the message: you should not take all critical voices seriously. Nonsense, it has nothing to do with science, but people believe it.”

Professor Hol says it is important that scientists and investigative journalists respond to these attempts to muddy the waters and drown out concerns: “This has to be exposed.”

It’s encouraging that this is increasingly happening, despite it often engendering a new round of vilification and abuse from those fighting for the right of corporations to keep selling their products without critical scrutiny.

The original source of this article is GMWatch Copyright © Jonathan Matthews, GMWatch, 2020