The same corporate media, which were utilized to condition the mind to the purported dangers of marijuana use was also used to ignore the existence of the Green Party. The choice was deliberately limited to the usual two party system, calling it democracy and freedom of choice.

The same formula was used when they destroyed, and suppressed, organic protocols in favor of the industrially manufactured concoctions and call it Modern Medicine, which, objectively, has nothing to do with health care whatsoever, but more about making shamelessly high profits by keeping the patient always a patient.

It turned out, the United States government itself knows that this wonderful plant has medical properties that are far more effective than all conventional drugs. 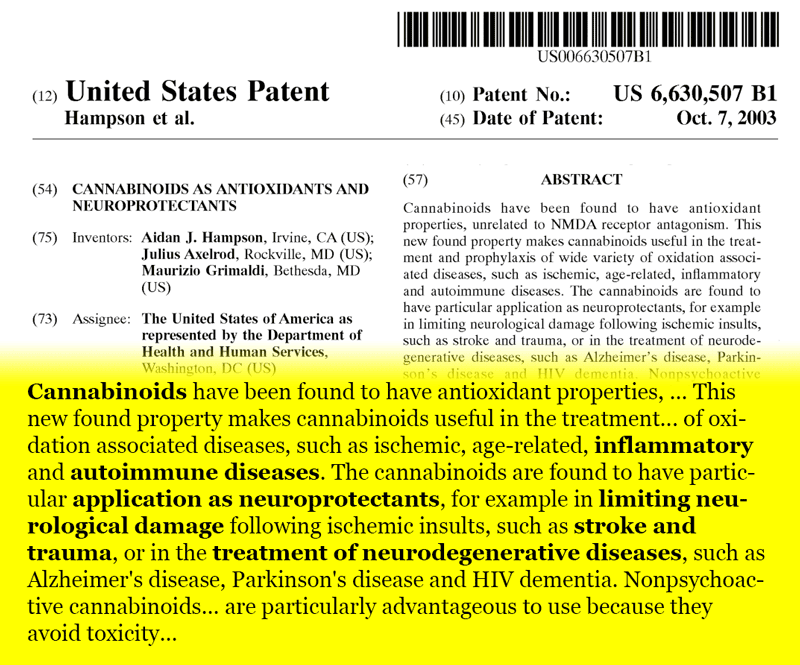 “Cannabinoids have been found to have antioxidant properties, unrelated to NMDA receptor antagonism. This new found property makes cannabinoids useful in the treatment and prophylaxis of wide variety of oxidation associated diseases, such as ischemic, age-related, inflammatory and autoimmune diseases. The cannabinoids are found to have particular application as neuroprotectants, for example in limiting neurological damage following ischemic insults, such as stroke and trauma, or in the treatment of neurodegenerative diseases, such as Alzheimer’s disease, Parkinson’s disease and HIV dementia. Nonpsychoactive cannabinoids, such as cannabidoil, are particularly advantageous to use because they avoid toxicity that is encountered with psychoactive cannabinoids at high doses useful in the method of the present invention.” Google Patent

This is on top of the thousands of industrial application that the same plant can satisfy. Some of its industrial uses include: paper, clothing, car and engine parts, concrete and construction materials, oil, fuel, etc.

On an annual basis, 1 acre of hemp will produce as much fiber as 2 to 3 acres of cotton. Hemp fiber is stronger and softer than cotton, lasts twice as long as cotton, and will not mildew.

On an annual basis, 1 acre of hemp will produce as much paper as 2 to 4 acres of trees. From tissue paper to cardboard, all types of paper products can be produced from hemp.

The quality of hemp paper is superior to tree-based paper. Hemp paper will last hundreds of years without degrading, can be recycled many more times than tree-based paper, and requires less toxic chemicals in the manufacturing process than does paper made from trees.

Hemp can be used to produce fiberboard that is stronger and lighter than wood. Substituting hemp fiberboard for timber would further reduce the need to cut down our forests.

Hemp can be used to produce strong, durable and environmentally-friendly plastic substitutes. Thousands of products made from petroleum-based plastics can be produced from hemp-based composites.

It takes years for trees to grow until they can be harvested for paper or wood, but hemp is ready for harvesting only 120 days after it is planted. Hemp can grow on most land suitable for farming, while forests and tree farms require large tracts of land available in few locations. Harvesting hemp rather than trees would also eliminate erosion due to logging, thereby reducing topsoil loss and water pollution caused by soil runoff.

Hemp seed oil can be used to produce non-toxic diesel fuel, paint, varnish, detergent, ink and lubricating oil. Because hemp seeds account for up to half the weight of a mature hemp plant, hemp seed is a viable source for these products.

Just as corn can be converted into clean-burning ethanol fuel, so can hemp. Because hemp produces more biomass than any plant species (including corn) that can be grown in a wide range of climates and locations, hemp has great potential to become a major source of ethanol fuel.

Literally millions of wild hemp plants currently grow throughout the U.S. Wild hemp, like hemp grown for industrial use, has no drug properties because of its low THC content. U.S. marijuana laws prevent farmers from growing the same hemp plant that proliferates in nature by the millions.

From 1776 to 1937, hemp was a major American crop and textiles made from hemp were common. Yet, The American Textile Museum, The Smithsonian Institute, and most American history books contain no mention of hemp. The government’s War on Drugs has created an atmosphere of self-censorship where speaking of hemp in a positive manner is considered politically incorrect or taboo.

United States Presidents George Washington and Thomas Jefferson grew hemp, used products made from hemp, and praised the hemp plant in some of their writings.

No other natural resource offers the potential of hemp. Cannabis Hemp is capable of producing significant quantities of paper, textiles, building materials, food, medicine, paint, detergent, varnish, oil, ink, and fuel. Unlike other crops, hemp can grow in most climates and on most farmland throughout the world with moderate water and fertilizer requirements, no pesticides, and no herbicides. Cannabis Hemp (also known as Indian Hemp) has enormous potential to become a major natural resource that can benefit both the economy and the environment.

Fuel can be a by-product of hemp cultivation. One fuel would be biodiesel because of the oils in the seeds and stalk of the hemp, another would be biofuel from the fibrous stalks.

Millennia of selective breeding have resulted in varieties that look quite different. Also, breeding since circa 1930 has focused quite specifically on producing strains which would perform very poorly as sources of drug material. Hemp grown for fiber is planted closely, resulting in tall, slender plants with long fibers. Ideally, according to Defra in 2004 the herb should be harvested before it flowers. This early cropping is because fiber quality declines if flowering is allowed and, incidentally, this cropping also pre-empts the herb’s maturity as a potential source of drug material, even though the tetrahydrocannabinol (THC) content would still be very low with these strains of hemp.

The name Cannabis is the genus and was the name favored by the 19th century medical practitioners who helped to introduce the herb’s drug potential to modern English-speaking consciousness. Cannabis for non-drug purposes (especially ropes and textiles) was then already well known as hemp.

The name marijuana is Mexican (or Latin American) in origin and associated almost exclusively with the herb’s drug potential. That marijuana is now well known in English as a name for drug material is due largely to the efforts of US drug prohibitionists during the 1920s and 1930s. We can surmise that this name was highlighted because it helped to characterize the herbal drug as quite alien to English-speaking culture.

There are broadly three groups of Cannabis varieties being cultivated today:

In short, there’s really no compelling reason why marijuana should be restricted in the first place. To subject it to the laws of men borders on the arrogance and self-importance of the few.

Weed Wins! Voters Legalize Marijuana Across the US 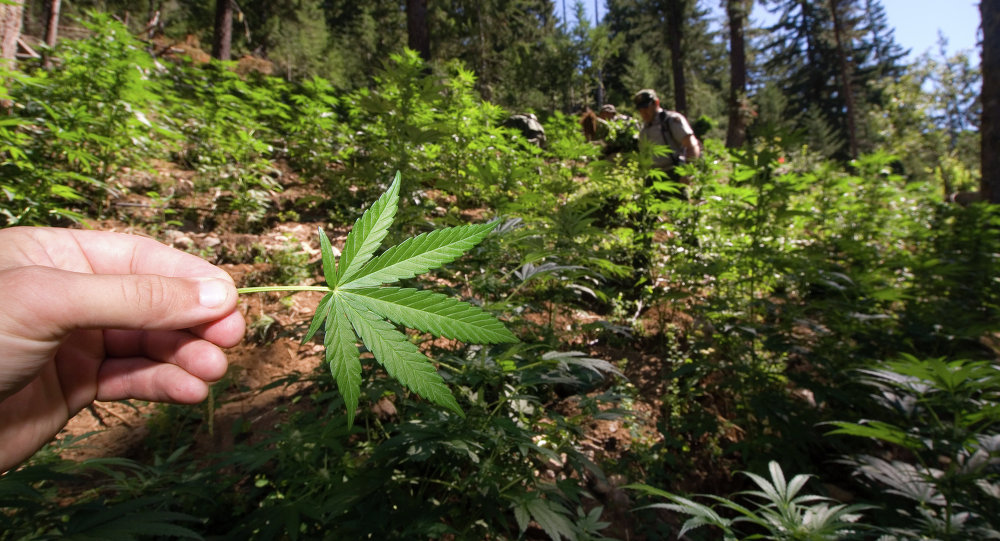 California, Maine, Massachusetts, and Nevada all voted on Tuesday to legalize the recreational use of marijuana for adults. Arizona was the only state with recreational cannabis use on the ballot that did not pass the initiative, with 52 percent of Grand Canyon state residents voting against it.

California is one of the country’s most densely-populated states, with some 39 million residents. Recreational use passing in that state alone means that one fifth of Americans are now living in a state where such use is legal.

“If California votes ‘yes,’ it’s legitimately the beginning of the end of the war on marijuana in the United States. Period. Full stop,” California Lieutenant Governor Gavin Newsom said in a statement prior to Election Day.

The use of medicinal marijuana passed in Florida, Montana, North Dakota, and Arkansas. Montana also voted to ease restrictions on their existing medical marijuana laws.

Arkansas was the first state in the Bible Belt to pass medical marijuana laws, with 53 percent of their residents voting in support. Qualifying patients will now be able to purchase medical marijuana through regulated dispensaries.

In Florida, a fierce battleground state won by Donald Trump, the measure won in a 71 percent landslide, showcasing that voters on both sides of the political aisle support legalizing marijuana, at least in some capacity.

“It’s changed in the minds of these voters from being like cocaine to being like beer,” University of Southern California political scientist John Matsusaka told Reuters.

Just like the herbal industry, which is being usurped by Big Pharma’s “food supplement” mega-enterprise, the weed industry will also be controlled by Big Chemo through governmental licensing restrictions.

In the future, the air will also be commercialized. But, since breathing could not be feasibly restricted, it will be poisoned systematically just like our drinking water, and clean air will soon be bottled for profit if we let the corporate monopolies rule the day.

So, in the aftermath of the most stressful electoral exercise ever, it would help to have some form of organic relaxant to weather out the prevailing social climate. A puff, or two, should do the job.

1 thought on “Hallelujah, Humble Weed Wins in 4 US States!”