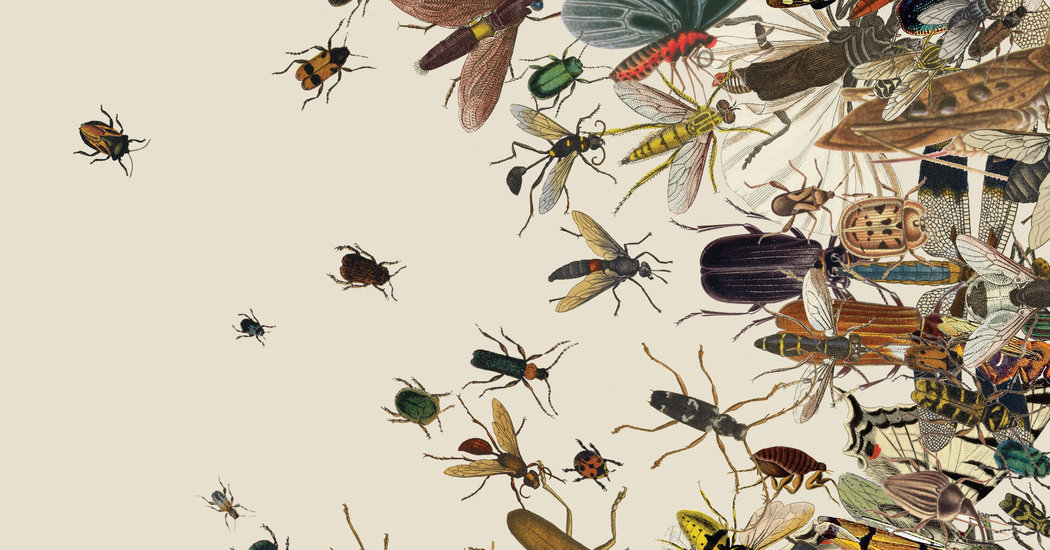 Insect abundance is plummeting with wild abandon, worldwide! Species evolve and go extinct as part of nature’s normal course over thousands and millions of years, but the current rate of devastation is off the charts and downright scary.

Moreover, there is no quick and easy explanation for this sudden emergence of massive loss around the globe. Yet, something is dreadfully horribly wrong. Beyond doubt, it is not normal for 50% to 90% of a species to drop dead, but that is happening right now from Germany to Australia to Puerto Rico’s tropical rainforest.

Scientists are rattled. The world is largely unaware of the implications because it is all so new. It goes without saying that the risk of loss of insects spells loss of ecosystems necessary for very important stuff, like food production.

Farmland birds that depend upon a diet of insects in Europe have disappeared by >50% in just three decades. French farmland partridge flocks have crashed by 80%. Nightingale abundance is down by almost 80%. Turtledoves are down nearly 80%.

In Denmark (1) owls, (2) Eurasian hobbies, and (3) Bee-eaters, which subsist on large insects like beetles and dragonflies, have abruptly disappeared. Poof, gone!

As for one example, Krefeld data for hoverflies, a pollinator often mistaken for a bee, registered 17,291 hoverflies from 143 species trapped in a reserve in 1989. Twenty-five years later at the same location, 2,737 individuals from 104 species or down 84%. (Source: Gretchen Vogel, Where Have All The Insects Gone? Science Magazine, May 10, 2017)

A shortage of insect pollinators in the Maoxian Valley in China has forced farmers to hire human workers at $19 per worker/per day to replace bees. Each worker pollinates 5-to-10 apple trees by hand per day.

“I’ve been wondering for the last few years why some of the insects have been dropping off … This year has really taken the cake with the lack of insects, it’s left me dumbfounded, I can’t figure out what’s going on.” (Source: Mark Rigby, Insect Population Decline Leaves Australian Scientists Scratching For Solutions, ABC Far North, Feb. 23, 2018)

According to entomologist Dr. Cameron Webb / University of Sydney, researchers around the world widely acknowledge the problem of insect decline but are at a loss to explain the causes.

Today’s Sixth Extinction is so prevalent that scientists prefer to designate species loss as “functional extinctions,” which means functionally extinct animals and plants are still present but no longer prevalent enough to affect an ecosystem. Not only, seed dispersal and predation and pollination and other ecological functions are also lost.

“More than three-quarters of the world’s food crops rely at least in part on pollination by insects and other animals,” (Source: Pollinators Vital to Our Food Supply Under Threat, FAO/UN).

But, already some insect populations have dropped by as much as 90%, e.g., (1) the Monarch butterfly in North America and (2) the great yellow bumblebee in Europe.

One of the biggest drivers of decline is loss of wild flowers. Here’s the problem: Low-intensity farming of small fields lined with weeds and flowers (think: “American Gothic” by Grant Wood circa 1930) have been overrun by vast industrial crop monocultures with fields stretching to the distant horizon with not a weed or a flower in sight, which paradoxically serves as evidence that the overused maxim “the good ole days” shows true grit.

Additionally, herbicides like glyphosate (Roundup) allow industrial farming to grow perfect monocultures of crops, as everything else is wiped out. But, where does the glyphosate ultimately go? Breakfast anyone?

The world is rapidly filling up to its brim with insecticides that are toxic to pollinators. For example, neonicotinoids (agricultural insecticides) are meant to kill specific insect pests but invariably get into plant tissue and nectar and pollen and kills insects carte blanche, across the board. Thus, ironically, farmland ecosystems are poisoned by industrial farming practices.

Neonicotinoids are a divisive issue worldwide:

“The European Union today expanded a controversial ban of neonicotinoid pesticides, based on the threat they pose to pollinators. The decision pleased environmental groups and was greeted with trepidation by farming associations, which fear economic harm.” (Source: European Union Expands Ban of Three Neonicotinoid Pesticides, Science Magazine, April 27, 2018)

As of August 2018, the EPA has scheduled “planned completion” of a “Review of Neonicotinoid Pesticides” for sometime in 2019. A coalition of food safety and environmental groups delivered 219,210 public comments to EPA earlier in the year, urging the agency ban neonicotinoid pesticides, which they view as a leading cause of pollinator decline. Additionally, more than 4.4 million Avaaz members have called for a ban on neonics (Avaaz, est. 2007, is one of the world’s largest most powerful online activist networks).

“People from around the country have made it clear: The EPA must act now to save our pollinators. No matter what Scott Pruitt’s industry friends say, this is a problem we can’t ignore. The health of our food system depends on it,” said U.S. Representative Earl Blumenauer (D-OR). (Source: Environment America, News Release, 219,210 Americans Call on EPA to Ban Bee-Killing Pesticides, April 21, 2018).

“Neonics are 5,000 to 10,000 times more toxic than DDT,” according to Jean-Marc Bonmatinof of The National Centre for Scientific Research in France,” Ibid.

Rachel Carson (Silent Spring, 1962) would be horrified. As far back as the 60s she warned about indiscriminate use of pesticides and accused the chemical industry of disinformation, and she scolded public officials for accepting the chemical industry’s claims; ultimately, her efforts led to a nationwide ban on DDT and inspiration for creation of the EPA. (The ban on DDT saved America’s national bird since 1782, the bald eagle.)

Similar to concerns about use of synthetic pesticides, sensitivity of insects to global warming has only recently been exposed in new studies published in the Proceedings of the National Academy of Sciences, showing alarming losses of insects in pristine tropical rainforests over a multi-decade study that has rocked the science world.

Over that same 40-year time period, the average high temperature in the rainforest increased by 4 degrees Fahrenheit. Which negatively impacts insects because after a certain thermal threshold insects will no longer lay eggs, and their internal chemistry breaks down.

“Without insects and other land-based arthropods, EO Wilson, the renowned Harvard entomologist, and inventor of sociobiology, estimates that humanity would last all of a few months,” Ibid.

Well then, the number of insects still out there qualifies as one of the most puzzling questions of the 21st century.

Postscript: “Our planet is now in the midst of its sixth mass extinction of plants and animals — the sixth wave of extinctions in the past half-billion years. We’re currently experiencing the worst spate of species die-offs since the loss of the dinosaurs 65 million years ago. Although extinction is a natural phenomenon, it occurs at a natural “background” rate of about one to five species per year. Scientists estimate we’re now losing species at 1,000 to 10,000 times the background rate, with literally dozens going extinct every day.” (Source: The Extinction Crisis, Center for Biological Diversity, biologicaldiversity.org) Whew!

Robert Hunziker lives in Los Angeles and can be reached at rlhunziker@gmail.com.