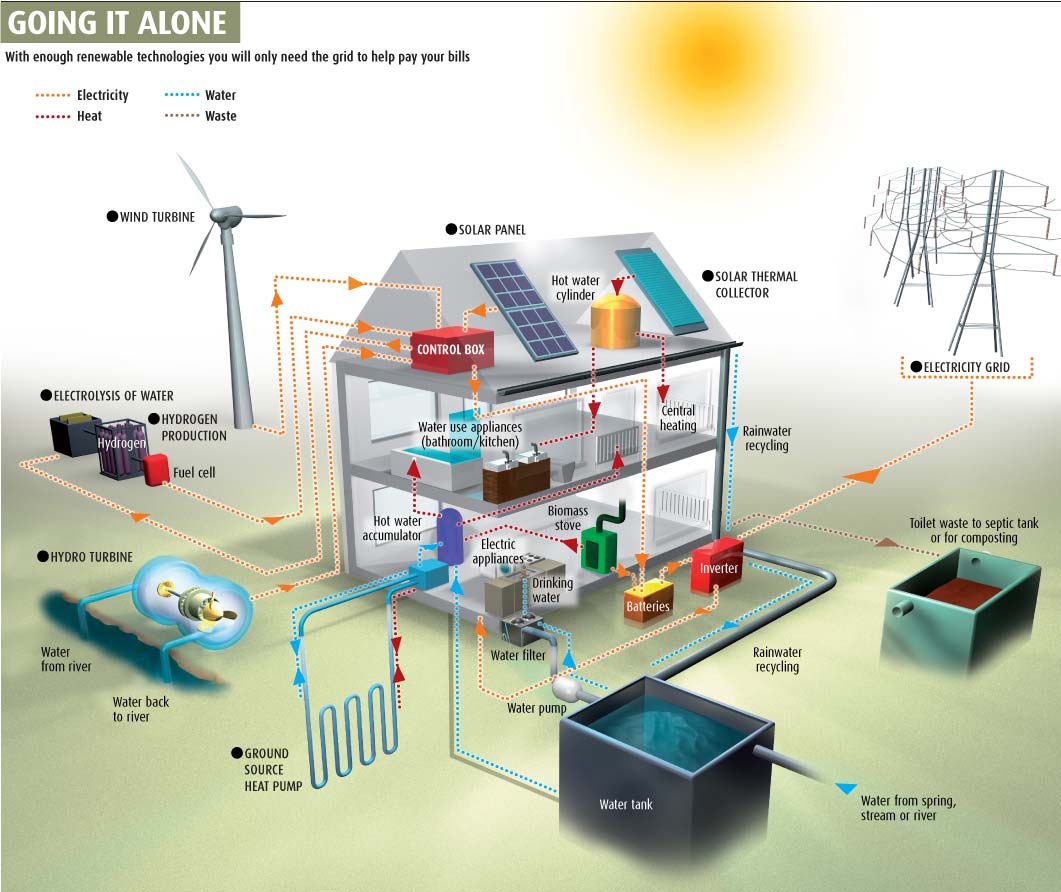 Most of us desire freedom. But not all of us are willing to do what needs to be done in order to get there.

Living off the grid is the most decisive way to achieve freedom, but you need to learn a lot of things and a lot of skills in order to achieve it. But it is surely a step in the right direction, and the whole journey can be fun, too.

5 Reasons To Consider Living Off The Grid I think everybody who opts to live off the grid has a unique set of reasons for doing it. Some people are doomsday preppers, some want to be easier on the environment, some want to live closer to nature, and some folks just don’t like living around people. I get that. But at the core of the matter, there are 5 reasons you should consider getting yourself off the grid, or at least getting started at it.

There’s nothing that makes me happier than doing things myself. I’m not just saying that. When I make my own soaps, grow my own food, produce my own energy and keep my own livestock, I feel happier. I feel more accomplished. And that’s something more and more people are wanting, sometimes without knowing they want it.

In our society, we’re all dependent on something. Sometimes it’s government, sometimes it’s corporations, and sometimes it’s utility companies. In a way, humans are meant to be dependent on one another. If we weren’t geared toward community, we wouldn’t have lived in communities for thousands and thousands of years. But that doesn’t mean you can’t take a step and start doing things for yourself, right?

A Sense of Accomplishment

This rolls in with what I was talking about a paragraph or two up from here. It’s easy to go to the store, buy all the things, go home, watch TV, make dinner, and get ready for the next day; but where is the sense of accomplishment in that? It’s all depending on someone else to feed you, house you, entertain you, and employ you.

“Uh oh! Did shit hit the fan? Bummer man. I’m a self sufficient fella/lady.” Or at least that’s what you might be saying if you get yourself off the grid! But it’s all about being prepared.

One of the biggest crippling factors of happiness is being in debt. In fact, money itself can be something of an addictive thing. But becoming debt free is absolutely liberating for you and your family. It gives you the option to live your life your way and not have to deal with paying off any nonsense.

Ultimately, what we all strive for in our lives is happiness. But sometimes I think the lot of us have been led astray by a culture that teaches us that happiness comes from being rich, something most of us won’t ever know, and by collecting things, most of which we don’t actually need.

To those of you who have taken the steps to live off the grid, congratulations! To those thinking about doing it, we wish you luck and if we can, we’ll be with you every step of the way.

What Are the Five Things You Need to Live Off the Grid?

For some, the idea of doing without municipal services is a nightmare. For others, it’s the culmination of a long-held dream. Living off the grid means it’s just you and nature existing harmoniously side-by-side. No building codes, no dependency on the power grid, no monthly payment to the trash collection service. If you currently live in a home that depends upon the energy grid, it’s not just a matter of snipping the wires. It requires resourcefulness and the ability to adapt to an unfamiliar way of life. Five things top the list of what you need make it in your new off-grid lifestyle.

A spirit of independence and a commitment to a sustainable lifestyle is required to make a successful go of off-grid living. You won’t escape society entirely; even self-sufficient residents pay property taxes. Living off grid means different things to different people. Some want modern conveniences and large power-generating stations. Others are happier taking a step back in time and living with rustic forms of heating and food storage. Going off-grid can be an expensive proposition if you try to replace all the modern amenities you now have. If you don’t mind hard work, sacrifice and jack rabbits as your nearest neighbors, an off-gird lifestyle might be in your future.

The best spot for an off-grid home is in a remote region where building codes don’t apply. This doesn’t mean you have to buy an isolated lot at the top of a rugged mountain. Look for sparsely populated counties in regions where you like the climate and scenery. A quick call to the county building authority will determine whether restrictive codes and covenants exist. You need legal access as well. During the purchase of the land, make sure you will always have a legal right to use any existing roads, paths or waterways to reach your land.

With today’s alternate power technology, off-grid residents can generate their own electricity, but power systems can be expensive and they require the use of large batteries for energy storage. A sustainable power source depends upon the geography of the lot. High trees can block the wind, making a wind turbine unsuitable, and southern exposure is necessary to power a solar system. To use hydropower, the lot must have an all-season river or creek. On a calm or cloudy day, wind and solar systems won’t produce energy. Running the refrigerator, water heater and stove on propane, and using wood to produce heat, will conserve electricity. It’s also a good idea to invest in a backup generator. Through 2016 and maybe longer, taxpayers can receive an energy credit when filing their income taxes for installing some types of renewable energy systems.

A site with a reliable water supply is essential to off-grid living, and buyers can stipulate finding potable water on the property as a contingency of their land-buying contract. A drilled water well is standard and requires the use of a pump and a large collection tank for water storage. Wells used for drinking water should be regularly tested and treated, if necessary, to ensure water safety. Rain barrels can supplement supply, especially for gardening needs, or depending on your location’s annual rainfall, provide most or all of the water for household needs. Collecting water from a nearby stream sounds simple, but the risk of contamination from animal feces, bacteria and other pollutants necessitates the use of water filtration and purification systems, which might require additional solar power units to operate.

Even in areas without building codes, you’ll probably run into sewage regulations. Indiscriminately disposing of waste isn’t healthy for anyone and most local health departments, in addition to the Environmental Protection Agency, require safe waste disposal. Allowable off-grid options include septic tanks with buried leach fields and open-air lagoon pits. Composting toilets are acceptable in many regions. Personal septic systems require ongoing maintenance and inspections to keep them functioning correctly.

We would like to inject here about the importance of DIY healthcare for a truly independent living off the grid system.

1 thought on “Living Off The Grid”