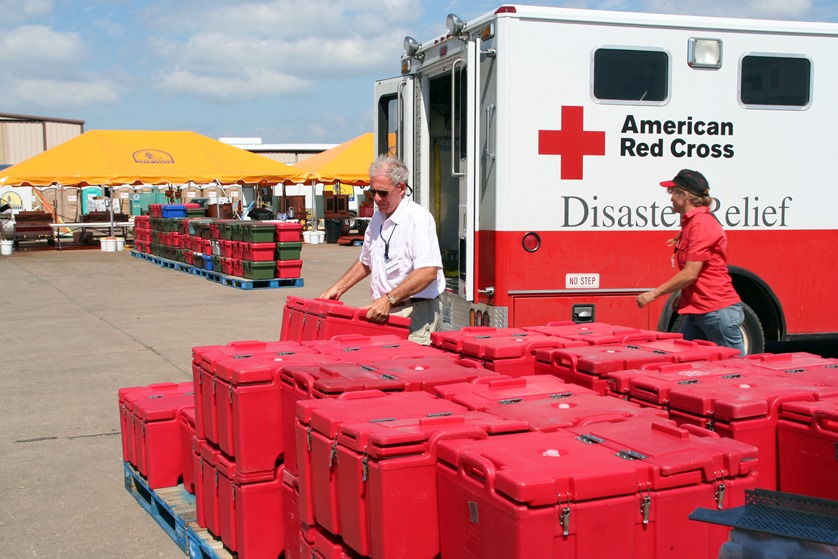 The Red Cross is a disaster ‘racket’ in the business of making money from people’s misery, especially with totally engineered disasters such as 9/11.

So-called ‘charities’  are nothing more than a means of extracting even more money from the masses to swell the already overflowing coffers of the mega-rich.

(Editor’s Note: This excerpt from John Hamer’s book, The Falsification of History: Our Distorted Reality (2012), presents a disturbing image of the Red Cross. I suspect there is much more to be revealed about this outfit.)

The International Red Cross is an Elite-controlled front organization whose true purpose is the complete opposite from its stated purpose.

The moment a ‘natural’ disaster such as Hurricane Katrina, the Haitian earthquake or the Japanese Tsunami occurs; the Red Cross floods the airwaves with ads seeking donations.  With music full of pathos playing in the background, the announcer tells us that the Red Cross is ‘always there in time of need’ and now that the poor victims are suffering terribly, ‘won’t you please open your heart and wallet?’

These people have totally mastered the science of extracting money from the unthinking masses.   For example, the dust from the World Trade Center demolition had not even settled (literally) before the Red Cross were appealing to us all to give blood and money to help the families of the victims of the ‘terrorist’ attack.  Thousands of people gave blood and even more gave millions of dollars to the Red Cross. Perhaps, it would have been pertinent to ask ‘blood for whom’?  Everyone was dead (there were few injuries, relatively speaking) so why was the Red Cross asking for blood donations day and night for a week or longer?

The answer is reflective of the true purpose of the Red Cross.  Sad to say the Red Cross is a disaster ‘racket.’ which is in the business of making money from people’s misery, especially with totally engineered disasters such as 9/11.  They sell the blood on, of course, but they apparently also use the blood for other things to which the public is generally not privy and one could legitimately ask where does all the money go and to whom?

For the most part, they keep it for themselves as do the vast majority of major, household-name charities.  The families of the victims of 9/11 had to badger, harass and threaten the Red Cross in an attempt to obtain $11 million that they would not release to the families, as long as one year after the event – and that is just what we were told in the media, so my guess is that the actual figure was much, much higher than this.

The CEO of the Red Cross and other senior administrators receive obscene salaries and massive perks, all of which are paid directly from  contributions.  At the time of writing, the salary of the current president is almost $700,000 per annum and the total revenue of the Red Cross is well in excess of $3bn!

In Sept. 2005, Paul Joseph Watson and Alex Jones wrote, “As the aftermath of hurricane Katrina continues to wreak mayhem and havoc amid reports of mass looting, shooting at rescue helicopters, rapes and murders, establishment media organs are promoting the Red Cross as a worthy organization to give donations to.  The biggest website in the world, Yahoo.com, displays a Red Cross donation link prominently on its front page.  Every time there is a major catastrophe the Red Cross and similar organizations like United Way are given all the media attention while other charities are left in the shadows.  This is not to say that the vast majority of Red Cross workers are not decent people who simply want to help those in need”.

In fact, the Red Cross has been caught ‘red-handed’ withholding money in the wake of terrible disasters that require immediate funds.  In the name of the ‘Liberty Fund’ for 9/11 family relief, the Red Cross collected $564 million in donations yet only actually distributed around $150 million.

On Jan 3, 2005, CNN reported: “Charities swung into action after the September 11 terrorist attacks, raising more than $1 billion.  But questions are being raised about where and how and how much of that money is being distributed.  Bearing the brunt Tuesday during a hearing of the House Energy and Commerce Committee’s oversight panel was outgoing Red Cross President Dr. Bernadine Healy.  Healy was hammered by one New York official for the Red Cross’ decision to put aside nearly half of the money raised for future needs that may include terrorist attacks.  ‘I see the Red Cross, which has raised hundreds of millions of dollars that was intended by the donating public to be used for the victims of September 11 — I see those funds being sequestered into long-term plans for an organization,’ New York Attorney general Eliot Spitzer testified. ”

In fact the Red Cross has a long, long sordid history of stealing cash donations intended for disaster relief. Following the disastrous San Francisco earthquake in 1989, the Red Cross donated only $10 million of the $50 million that had been raised, and kept the rest.

Similarly, following the Oklahoma City bombing in 1995 and the Red River flooding in 1997 many donations were also withheld.  Even as far back as the Korean War, the Red Cross was plundering soldiers’ relief packages, the famous ‘Red Cross Parcels’ from home.

The Red Cross is very adept at stealing money and looting mail and has been exposed in this respect many times but it has been allowed to escape sanctions, punishment or exposure because the organization is so closely allied with and indeed is inextricably linked with the Elite establishment.  It is without doubt an organization run by Elite insiders whose purpose is to gather intelligence and steal from the poor, underprivileged and needy to further line the pockets of the rich.

Several minor charities that were involved with the 2004 Tsunami relief project expressed outrage in public to say that large charities like Red Cross and Oxfam were engaged in secret negotiations that resulted in a large amount of the public-donated money being withheld from those most affected by the disaster. See Red Cross Hasn’t Spent $200 million Raised for S. Asian Tsunami

The message here should be clear to all.  Under no circumstances donate money to major charitable organizations unless you would like your money to go to benefit the Elite’s expansion of their empires and the fast-developing police state in your own backyards.  Find smaller independent charitable organizations that you know to be reliable and make your donations to them.

John Hamer is a British geo-political researcher. He is the author of the book ‘The Falsification of History’

“I believe over 1 billion was collected by the Red Cross for the false flag 3/11 attack on Japan. The Japanese people received next to nothing of that money. The same could be said for the Haiti engineered quake of 2009.”  – Ken Adachi

Other fine articles by John Hamer on this website:

Was Titanic Sinking an Insurance Scam?

The Red Cross 911 blood drive was to build up stock for the “coalition forces” about to be deployed to Afghanistan.    Of course the public weren’t told that at the time, since Congress hadn’t gone through the charade of “approving” military action yet.

There’s been a lot of blood spilled since then and it’s not going to stop, so I don’t care if the Red Cross sells the blood I donate. They have to pay an army of medical technicians, labs, storage and transportation costs.  I’m more interested the availability of blood for people who would die without it.

You may recall that the IRC sent delegations to inspect Auschwitz in June and September 1944, in accord with the 1929 Geneva Convention. The King of Denmark had called for the inspections due to rumors of gas chamber genocide going on at Auschwitz.

The Red Cross inspector’s report found no evidence of gas chambers, and even praised the Germans on delivering over one and half million Care packages to inmates since 1942. Later, at the trials in Nuremberg in 1946 an SS medical doctor testified that SS guided the Red Cross tour only through specially prepared routes through the camp, primarily Stalag 13 which housed Allied prisoner’s of war in reasonable conditions.
There’s no denying that innocent people like Fr. Max Kolb were murdered to intimidate other prisoners as early as 1941. Kolb and ten other men picked at random were locked in a barracks to die of thirst and starvation, and when he and 3 others hadn’t succumbed quick enough and the SS needed the barracks, they killed them with injections of Prussic acid. Edith Stein, guilty of nothing, was was never heard from again after her internment in Auschwitz in 1942 – 3 years before the typhoid epidemic that atrocity deniers claim produced the piles of emaciated bodies featured in Holocaust Museums.

It begs the question of possible Red Cross complicity with concealing atrocities if not mass genocide at Auschwitz. At Nuremberg the Red Cross representative defended the 1944 report, and to my knowledge they never retracted their conclusion. This would – technically – make the International Red Cross, Holocaust deniers, nicht wahr?

More recently in 1996, Indonesian separatists on the Island of Papau kidnapped European and Indonesian members of the globalist ‘World Wildlife Fund’. After securing the release of the Europeans, British military forces covertly laid waste to residential areas of Southern Highlands of West Papua in ‘old school’ reprisal. Red Cross helicopters were observed cooperating operationally with British forces during the massacre. The Red Cross response to the international flap was to appoint an ‘unbiased’ third party’ (an Australian NGO) to investigate the allegations. The resulting report claimed the Red Cross helicopters were fake, and actually contained soldiers of an undetermined origin – possibly British. Beyond those vague conclusions nothing happened. Eventually in 2005 the Australians laid the blame on Indonesia’s security forces.

2 thoughts on “The Red Cross Scam”