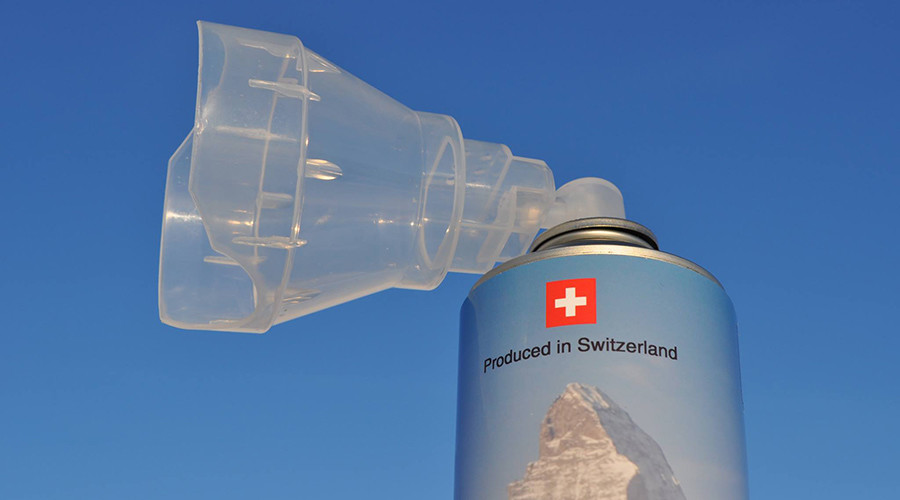 The global banking cartel, which is sitting at the top of all the megacorporations running the whole planet, is running out of options to squeeze and milk the population. They just started packing and selling air from the Swiss Alps.

A Swiss start-up is bottling fresh air from Switzerland to sell to residents of heavily polluted cities like those in China and India.

According to the company, the air is collected from various locations around the Swiss Alps and compressed into an aerosol can. It comes with an attached face mask to assist with breathing.

A seven-liter can of air cost 19.95 Swiss francs ($21) and contains enough air for over 120 breaths, which is around ten minutes of use.

“This product is for a population who live with terrible pollution every day, a pollution that may shorten their lives and cause debilitating health problems. One can of Swiss air is not the answer to their problems, but it is so nice to be able to breathe clean, fresh air even for a little while,” said the company’s CEO Danny Wurr.

Wurr said he expected his new company to become “a major world player in the new breathable air market,” confirming the first batch of orders had been already completed. He added the company is seeking investors to facilitate its rapid growth.

People in Switzerland may feel “bewildered” by the concept of bottled air “as they can already breathe nice clean, fresh air just by opening the door,” Wurr said.

The company also targets the European commuter market. “I heard the London underground was over 35 degrees this summer, I am sure they would love a breath of clean, fresh air down there, I know what it’s like to have your nose stuck in someone else’s armpit on the tube,” said Wurr.

He explained scores of Chinese tourists in the Swiss Alps buy fresh air which is “of course one of the main reasons why they come to Switzerland on holiday.”

It’s not the first time Swiss air has been on sale. In February another company started shipping $167-dollar jars of fresh air from the Swiss Alps across the world to those in need of clean air. The magic fresh air is taken directly from a “secret location” in the Swiss Alps, the company said.

Keeping the details of the exact location of extraction… this is exactly what scams are made of. Well, the whole thing really is a scam considering that after they have destroyed the whole biosphere, they are now seeking to further profit from its outcome.