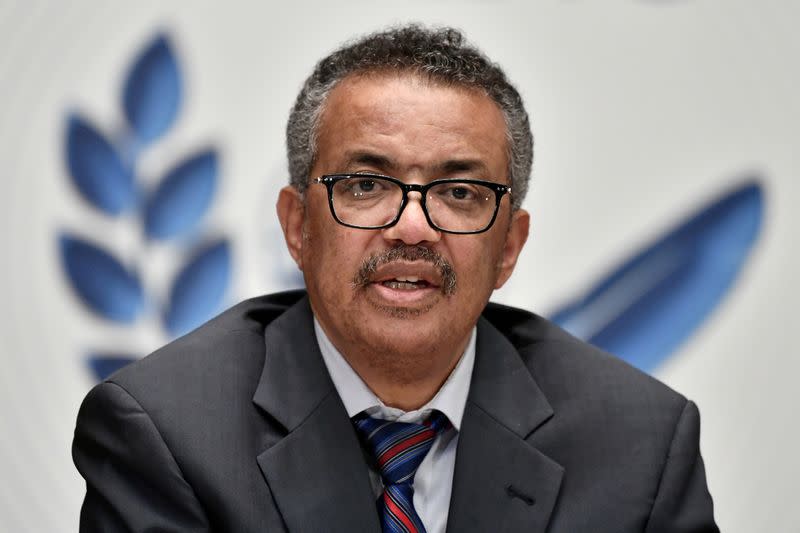 They really are maximizing the opportunity to exploit the pandemic captive world population to implement their globalist ambitions of a totalitarian technology-based dictatorship. They still think that most people today are stupid, as they are being watched how most of them demand lockdowns from their own governments to keep themselves safe from “COVID19 infected neighbors.”

A pandemic treaty will therefore facilitate the full implementation of vaccine passports worldwide. among other totalitarian measures. This means that our generation and the next are doomed if we don’t act decisively against the entire operation NOW.

The WHO is promoting a new international pandemic treaty to be drawn up and signed by the world’s nations. In their announcement on March 30th 2021 entitled COVID-19 shows why united action is needed for more robust international health architecture, the WHO (World Health Organization) predictably appeals to vague general principles and noble-sounding values in an attempt to entice humanity to support its quest for globalism and more centralization of power.

While it doesn’t use the buzzword sustainable this time, it does use another of its favorite buzzwords equitable. The WHO claims that everyone must have “universal and equitable access” to “safe, efficacious and affordable vaccines, medicines and diagnostics” for the current and future pandemics, however it has already gone wrong, since as the facts have shown, COVID is not a pandemic but rather an operation, an agenda, a PCR casedemic and a scamdemic.

Those skeptical of authorities asking for more collaboration as a ruse to grab more power should note that the current EU structure came about first via treaties. So let’s take a closer look at the words used to push this new international pandemic treaty.

Right on Cue, 23 World Leaders Plus WHO Boss Read Their Scripts to Promote International Pandemic Treaty

LONDON (AP) — More than 20 heads of government and global agencies called in a commentary published Tuesday for an international treaty for pandemic preparedness that they say will protect future generations in the wake of COVID-19.

But there were few details to explain how such an agreement might actually compel countries to act more cooperatively.

When the NWO (New World Order) wants to push their agenda forward, they roll out their devoted system-servers, bootlickers and gofers to get the public on board. In this case, the NWO controllers have used the 3 most powerful Western European leaders (UK prime minister Boris Johnson, German chancellor Angela Merkel and French president Emmanuel Macron), 20 other world leaders plus WHO boss Tedros Adhanom Ghebreyesus (24 signatories in all), to push the idea of an international pandemic treaty.

This NWO move is very predictable since it follows their time-tested formula of creating a crisis then exploiting that crisis to consolidate power, as they always do with false flag operations. Here is the letter reproduced in full:

“The Covid-19 pandemic is the biggest challenge to the global community since the 1940s. At that time, following the devastation of two world wars, political leaders came together to forge the multilateral system. The aims were clear: to bring countries together, to dispel the temptations of isolationism and nationalism, and to address the challenges that could only be achieved together in the spirit of solidarity and cooperation: namely, peace, prosperity, health and security.

‘Today, we hold the same hope that as we fight to overcome the Covid-19 pandemic together, we can build a more robust international health architecture that will protect future generations. There will be other pandemics and other major health emergencies. No single government or multilateral agency can address this threat alone. The question is not if, but when. Together, we must be better prepared to predict, prevent, detect, assess and effectively respond to pandemics in a highly coordinated fashion. The Covid-19 pandemic has been a stark and painful reminder that nobody is safe until everyone is safe.

‘We are, therefore, committed to ensuring universal and equitable access to safe, efficacious and affordable vaccines, medicines and diagnostics for this and future pandemics. Immunisation is a global public good and we will need to be able to develop, manufacture and deploy vaccines as quickly as possible. This is why the Access to Covid-19 Tools Accelerator (ACT-A) was set up in order to promote equal access to tests, treatments and vaccines and support health systems across the globe. ACT-A has delivered on many aspects but equitable access is yet to be achieved. There is more we can do to promote global access.

‘To that end, we believe that nations should work together towards a new international treaty for pandemic preparedness and response. Such a renewed collective commitment would be a milestone in stepping up pandemic preparedness at the highest political level. It would be rooted in the constitution of the World Health Organisation, drawing in other relevant organisations key to this endeavour, in support of the principle of health for all. Existing global health instruments, especially the International Health Regulations, would underpin such a treaty, ensuring a firm and tested foundation on which we can build and improve.

‘The main goal of this treaty would be to foster an all-of-government and all-of-society approach, strengthening national, regional and global capacities and resilience to future pandemics. This includes greatly enhancing international cooperation to improve, for example, alert systems, data-sharing, research, and local, regional and global production and distribution of medical and public health countermeasures, such as vaccines, medicines, diagnostics and personal protective equipment.

‘It would also include recognition of a ‘One Health’ approach that connects the health of humans, animals and our planet. And such a treaty should lead to more mutual accountability and shared responsibility, transparency and cooperation within the international system and with its rules and norms.

‘To achieve this, we will work with heads of state and governments globally and all stakeholders, including civil society and the private sector. We are convinced that it is our responsibility, as leaders of nations and international institutions, to ensure that the world learns the lessons of the Covid-19 pandemic.

‘At a time when Covid-19 has exploited our weaknesses and divisions, we must seize this opportunity and come together as a global community for peaceful cooperation that extends beyond this crisis. Building our capacities and systems to do this will take time and require a sustained political, financial and societal commitment over many years.

‘Our solidarity in ensuring that the world is better prepared will be our legacy that protects our children and grandchildren and minimises the impact of future pandemics on our economies and our societies. Pandemic preparedness needs global leadership for a global health system fit for this millennium. To make this commitment a reality, we must be guided by solidarity, fairness, transparency, inclusiveness and equity.’”

An Analysis of the Call for an International Pandemic Treaty

It is useful to take a closer look at some of the language, themes and modes of persuasion employed in this letter.

Firstly, notice how the writers frame the COVID plandemic as similar to a war. That was always the idea: to orchestrate a disruption with the impact of a world war without having to actually conduct a hot war. Wars have always served the NWO, not only as a tremendous source of hate, murder and mayhem, not only for depopulation, but also as a massive force of chaos that allows for restructuring in the aftermath.

Secondly, note the appeal to protection and safety: “a more robust international health architecture that will protect future generations.” Whatever you think of COVID, its spread or not had little to do with how “robust” the world “health architecture” was. This is just a blatant cry for world government. As Plato once said, “This and no other is the root from which a tyrant springs; when he first appears he is a protector.”

Thirdly, note the firm prediction that “there will be other pandemics and other major health emergencies … The question is not if, but when” which is exactly in alignment with Bill Gates’ warning of Pandemic 2 or Pandemic II. This is more fear and more predictive programming to entice you to surrender and acquiesce to the idea of an inevitable new normal with wholesale deprivation of freedom and rights.

Fourthly, notice how the writers appeal to humanity’s commonality (“nobody’s safe until everyone is safe”) which echoes another idea that has been used as nauseam by officials during this scamdemic (“we are all in this together”). The idea is based on pretending they care about the common welfare of society and humanity while systematically exploiting the average person’s compassion to gain power. It also blatantly ignores the obvious truth that each person, being bestowed with an immune system, is responsible for their own health.

As an aside, since those exposing the COVID scamdemic are being labeled as COVID deniers, I wonder if all those pushing the COVID cult could justly be labeled immune system deniers?

Fifthly, such a treaty, if it ever became a reality, would pave the way for even more shared surveillance so that there is literally nowhere you can go in the world without some authority knowing everything about you: “… greatly enhancing international cooperation to improve, for example, alert systems, data-sharing …”

Sixthly, the idea of such a treaty is also to make vaccines mandatory worldwide and reduce or eliminate vaccine hesitancy: “research, and local, regional and global production and distribution of medical and public health counter measures, such as vaccines, medicines, diagnostics and personal protective equipment.”

In the sentence “The main goal of this treaty would be to foster an all-of-government and all-of-society approach, strengthening national, regional and global capacities and resilience to future pandemics” the underlying idea is to make sure everyone is forcibly included in the governmental remedy. It’s “all-of-society” which means mandatory rules for everyone (except the rulemakers who can break the rules with contempt). You don’t want to wear a mask, take a vaccine or stay under house arrest? Tough! We are all in this together, so do what you’re told, you filthy peon.

Lastly, the letter finishes by appealing to “solidarity, fairness, transparency, inclusiveness and equity”which just goes to show that the politically correct woke mentality is everywhere and that you must submit to the religion of inclusivity, even if you don’t want to be included.

We need to be hyper-aware of such attempts to make order out of chaos and to exploit people’s fear and ignorance to centralize power. This idea of an international pandemic treaty is yet another stepping stone on the way to a NWO One World Government.

We would do well to remain vigilant in the face of any further calls for consolidation of decision-making, regardless of whether they are draped in peace, protection, prosperity, sustainability, solidarity, fairness, transparency, inclusiveness or equity – or whatever other sparkly and glittery garb the NWO manipulators use to disguise their nefarious agenda.

Makia Freeman is the editor of alternative media / independent news site The Freedom Articles, author of the book Cancer: The Lies, the Truth and the Solutions and senior researcher at ToolsForFreedom.com. Makia is on Steemit and LBRY.