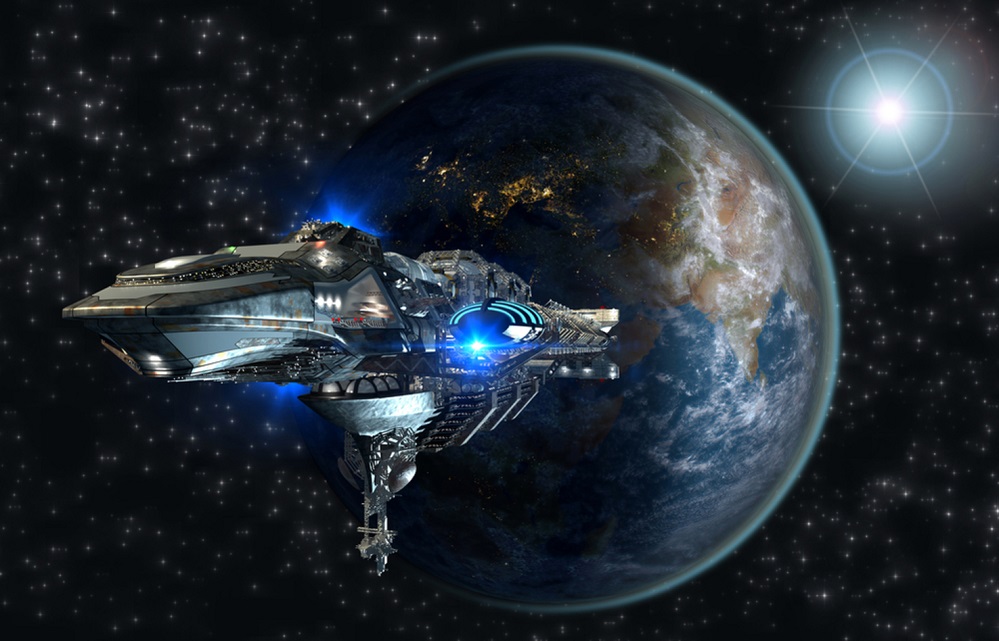 Space travel has been made possible 70 years ago behind the cloak of World War 2, under the auspices of the Vatican through the Nazis. No one should believe that the Church is not interested in the profound discoveries of one Nikola Tesla. In fact, Science is what gave them the edge against the early Sheeples.

But it is only now that this is being disclosed by piecemeal. The recent publications of multiple Earth-like planets is meant to prepare the masses for the big event when the Sky People show themselves up and get cozy with the lowly Earthlings. As part of the preparation, the latter must acquaint themselves of the technologies making space travel possible.

According to a new study, scientists have cracked one of most challenging obstacles to deep space travel: how to ensure that astronauts have enough fuel, air and water for the trip. Their proposed method involves “photo catalysts” that can split or recombine water molecules.

The emptiness of space and the vast distances between locations pose huge and unique challenges to space travel. One of the biggest challenges is the need to either bring everything you’ll require with you or to make it along the way. The basic essentials of fuel, water and breathable air are also some of the hardest to guarantee, since every ounce of weight packed onto the spacecraft has to be moved and protected. What if, instead, there was a method of recycling and recombining them?

A possible solution to that problem is what a group of scientists who hail from the California Institute of Technology, the Free University of Berlin and the European Space Agency published in their study in Nature on July 10.

Water is made of hydrogen and oxygen atoms, elements that can be used for fuel and breathing, respectively. Separating water molecules into those elements is easier said than done, though.

There are two methods of doing that, both of which involve electricity.

Electrolysis is the easier way, a way we use on Earth already to make hydrogen for fuel cells. It involves running a current through water that contains a soluble electrolyte. However, electrolysis requires heavy and bulky equipment, which are the last things you want on a spacecraft. But, if we could get it right, Charles W Dunnill of the University of Swansea, writing for The Conversation, suggests that we could literally use water as rocket fuel and transport “fuel” to space in the form of water, which would be much safer than putting explosives on top of a fire tower powered by more explosives.

Down here on Earth, hydrogen is increasingly being used as a clean fuel alternative to fossil fuels, although producing hydrogen cleanly in sufficient quantities as a fuel remains difficult, Technology Review reported in 2017.

The second method, and the subject of the study in question, is far more interesting. Photo catalysts absorb photons of light into a semiconductor material surrounded by water. The electricity in the photon kicks a nearby water molecule’s electron out of the molecule, freeing it to go off and interact with other molecules’ protons. When an electron and proton separate and form an atom by themselves, that’s hydrogen, and when the hydrogen atom leaves the water molecule, it leaves behind two oxygen atoms — O2, the form of oxygen that we breathe.

Even cooler, the process can be reversed and used to form water molecules from air and hydrogen fuel. That means that all these things can be recycled for repeated uses or to make whichever the spacecraft needs at that time. It also means that all three items can be stored as a single, stable material: water.

And what’s more, the equipment necessary for photocatalysis is much smaller and lighter than that needed for electrolysis.

​Researchers tested the viability of the process in a zero-G environment by dropping the entire experiment down a specialized “drop tower” that simulates microgravity. The problem to be overcome was bubbles — on Earth, gravity makes bubbles rise to the surface of the water, but in zero-G, the bubbles just sit there, which decreases efficiency. A solution suggested by Dunnill is centrifugal forces generated by a spinning apparatus — if you’ve ever seen the film “2001: A Space Odyssey,” you’ve seen one of these in action, generating some semblance of gravity for walking on a ship deep in space.

​The only remaining question is the source of the electricity for the process. In an interesting twist of fate, the day Nature published the study in question was also the anniversary of the day Albert Einstein received a Nobel Prize in 1923 for discovering the process that makes it possible: the photoelectric effect.

​Solar panels, also called photovoltaic cells, receive photons in sunlight and convert them into electricity. They are a common source of fuel for space travel as they are far more efficient in space than on Earth, but their utility decreases the further away from the sun you are. In the past, spacecraft sent toward the outer reaches of the solar system have typically used radioisotope thermoelectric generators, which harness the heat energy released by decaying radioactive materials, as an alternative fuel.

However, newer craft have made use of more powerful and effective photovoltaic systems: The Juno probe, launched toward Jupiter in 2011, was the first to use solar power instead of RTG that deep in space; the Dawn spacecraft, sent to the Asteroid Belt to study the dwarf planets Vesta and Ceres in 2007, used solar power to fuel its ion engine, another first, which generates thrust by ionizing and accelerating gas and which requires electricity to function.

Satellite Today reported in 2016 that Boeing, which manufactured Juno’s solar panels, had developed the most efficient panels yet, with an energy efficiency of 30.7 percent.