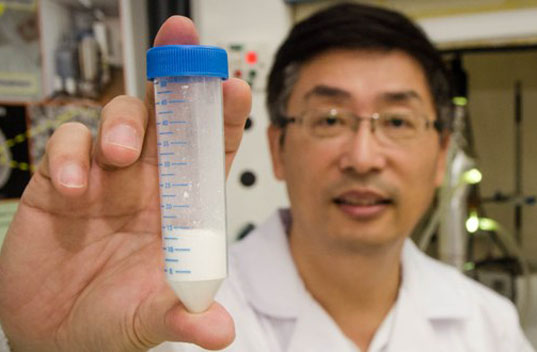 Researchers in Singapore have developed a new nanomaterial that functions like the best Swiss army knife in the world. The material, known as Multi-use Titanium Dioxide (TiO2), can produce energy, it can generate hydrogen, and it can even produce clean water. But that’s not all: The remarkable material can also be formed into flexible solar cells and it can double the lifespan of lithium-ion batteries. And with bacteria-killing properties, it can also be used in new antibacterial bandages.

The new material, which is being developed by scientists at Singapore’s Nanyang Technological University, is made by turning titanium dioxide crystals into nanofibers, which can then be formed into flexible filter membranes. The special material at the center of it all is titanium dioxide, which is cheap and abundant and has the ability to accelerate chemical reactions and can bond easily with water. Because it can bond with water, the material can potentially serve as a high-flux forward osmosis membrane and desalinate water. But that’s just one of its many remarkable features. In addition to producing clean water, the material can also produce hydrogen when exposed to sunlight, according to the researchers. And it can also be formed into an inexpensive, flexible solar cell that can be used to generate electricity.

“While there is no single silver bullet to solving two of the world’s biggest challenges: cheap renewable energy and an abundant supply of clean water; our single multi-use membrane comes close, with its titanium dioxide nanoparticles being a key catalyst in discovering such solutions,” said lead researcher Darren Sun. “With our unique nanomaterial, we hope to be able to help convert today’s waste into tomorrow’s resources, such as clean water and energy.”