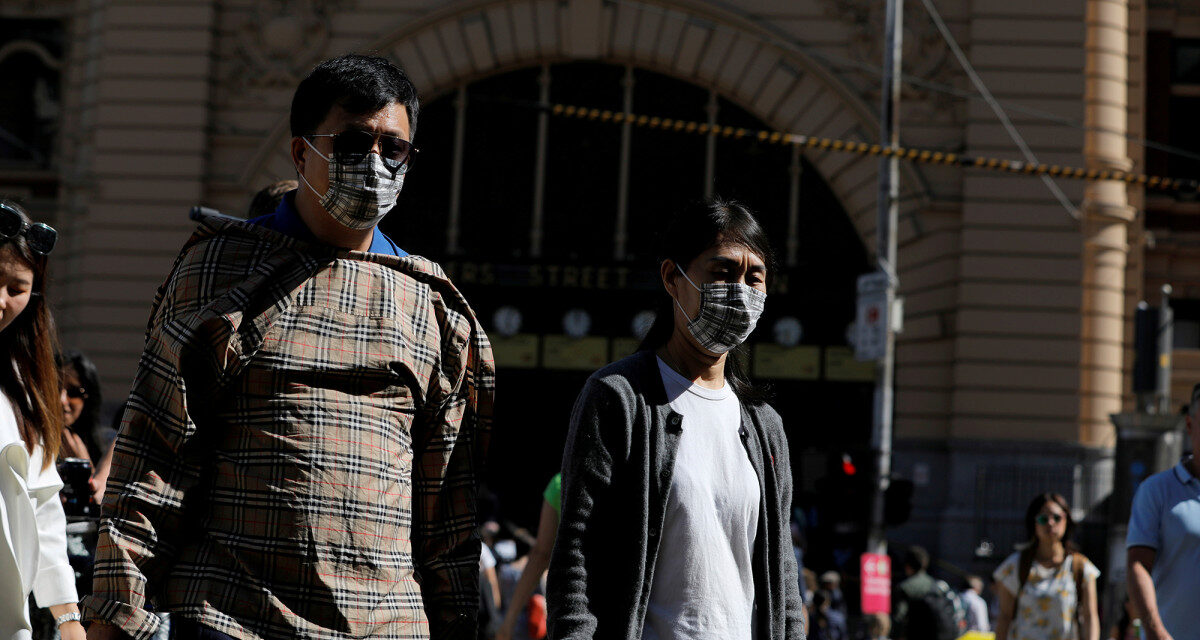 “Today we live so cowed under the bombardment of this intellectual artillery, the media, that hardly anyone can attain to the inward detachment that is required for a clear view of the monstrous drama. The will-to-power operating under a pure democratic disguise has finished off its masterpiece so well that the object’s sense of freedom is actually flattered by the most thorough-going enslavement that has ever existed.”

Seven months into this crisis, it can’t be any clearer. Just as they did following 9/11, western governments are using the COVID ‘pandemic’ crisis as a pretext to usher in a whole new layer of security state bureaucracy, and one which has the power to penetrate more deeply into our lives.

For those who are old enough to remember, prior to September 11, 2001, there was no such thing as a Department of Homeland Security (DHS), and yet in a matter of a few years, this federal department quickly grew into one of the largest federal agencies taking in tens of billions of taxpayer dollars each year ever since. In fact, the term “Homeland” hardly existed in America before that. But it was the perceived threat which provided it’s raison d’etre – buttressed by an incessant barrage of propaganda by the state and its media adjuncts, which made that new paradigm a reality. Soon, all of these new state apparatuses and security initiatives where all nestled neatly under the new banner of the Global War on Terror.

In 2020, this exact process has been repeated, only this time the threat isn’t the spectre of radical Islamist terror coming from foreign lands, but something much closer to home.

According to our governments, the new threat is your neighbour, your teacher, the shopkeeper, and even your family members.

And you are a threat to each of them.

And everyone is a threat to each other.

I described this dialectic in the recent special edition of New Dawn Magazine. Here’s a brief passage from my article entitled, “THE GREAT RESET: A Global Flu d’Etat”:

From the onset, computer-modeled predictions wildly overestimated death tolls in key countries. This was not by accident as the initial political and mass media campaign of shock and awe placed populations in an applied cognitive framework of helplessness and dependency.

The same psychological levers were activated in the immediate aftermath of the attacks of 11 September 2001. Psychologically traumatised western electorates not only accepted any level of state and corporate security, infringement of civil liberties and invasion of privacy, many even demanded their governments prosecute overseas wars to eliminate the perceived threat, at that time, of al Qaeda and international terrorism. Subsequently, a new normal was rolled-out globally, a series of endless wars and a leviathan of ‘anti-terror’ measures and digital surveillance at home.

Despite efforts to try and convince the public that everyone is a potential terrorist, the climate of fear was difficult to maintain. The genius of the COVID crisis is that the Establishment has now managed to convince us that everyone is a potential carrier of a deadly pathogen and that anyone who so much as sneezes in the vicinity of any- one else could not only kill them but also trigger a deadly ‘second wave’ of the pandemic.

Phase one of The Great Reset.

This week, the UK Government announced its latest round of emergency measure and regional lockdowns, supposedly for fighting the coronavirus.

Their new “Tier Three” lockdown system will determine whether towns or cities will be allowed to keep pubs, gyms and other leisure facilities open, for up to a further six months. But who knows when it will end. This has prompted concerned members of public, along with a few brave officials, to ask who exactly is setting this new Three-Tier system?

According to government officials, the new system will classify regions as either ‘medium’, ‘high’ or ‘very high’ levels, with high and above triggering new local lockdowns.

Welcome to thin end of the state’s bio-surveillance wedge. Similar protocols are being rolled out in Five Eyes Alliance nations the United States, Canada, Australia and New Zealand.

Just as with the global war on terror, governments have now erected an entirely new level within the ever-expanding national security state. In the UK, it’s called the Joint Bio Security Centre (JBC), formed in July, and already a £9 billion operation. Expect that number to grow substantially as the security complex discovers new and more complex systems required to keep pace with a new global bio surveillance and biological arms race.

“Led by a senior spy, the JBC does not publish details of its deliberations, the sources of its evidence or its key personnel. Nevertheless, its advice to ministers is understood to have guided recent decisions on where to enforce the local lockdowns affecting millions of people across the country,” said The Telegraph.

Is COVID really so deadly that the state needs to reconfigure all of its public health agencies under a new command and control hierarchy? Indeed, many asked the same question about al-Qaeda 20 years ago.

Unfortunately, few officials are demanding any answers or calling for accountability. There is only one such inquisitive public servant so far, Dr Greg Clark MP, Chairman of Science and Technology Committee, who believes that the British public are owed some answers as to who is in this opaque group, and which person(s) is making the final decisions for these rather arbitrary ‘alert levels’ being issued by the government.

Exactly what is the remit of this new JBC? According to the Institute for Government:

The centre will have two main jobs. The first is as an independent analytical function to provide real-time analysis about infection outbreaks. It will look in detail to identify and respond to outbreaks of Covid-19 as they arise. The centre will collect data about the prevalence of the disease and analyse that data to understand infection rates across the country.

Its second job is to advise on how the government should respond to spikes in infections – for example by closing schools or workplaces in local areas where infection levels have risen. Should UK government ministers decide to impose different restrictions in different areas and regions across England, it will be on the advice of the JBC.

And just as we suspected, here’s the salient point:

The JBC looks to be based on the Joint Terrorism Analysis Centre (JTAC). JTAC analyses intelligence related to terrorism and sets threat levels, which in turn inform ministers’ decisions on protecting the public and operational deployments by the police and other agencies.

The current Three-Tier alert system was based on the following framework devised for the JBC in determining new Covid-19 alert levels:

If it looks and sounds like a military operation, that’s because it is. This is the first time that the science of epidemiology has been brushed aside in favour of a one-size-fits-all, military-style approach to mitigating a viral pandemic.

The JBC insists that they are only providing recommendations “informed by the data collected and analysed by the JBC.” It is therefore up to Downing Street and its chief medical officer to issue the final alert level. Presumably they will be processing testing data, along with NHS Track and Trace, as well as data from the Office of National Statistics, and Public Health England (if it still exists).

The Telegraph adds, “She reports to Baroness Dido Harding, the chief of NHS Test and Trace, while the entire JBC organisation falls under the control of the Department of Health, which answers to the Mr Hancock. Government sources insisted the body was largely staffed by civil servants meaning it was “not appropriate” to release their identities.”

Lockdowns are no trivial matter and deeply impact the lives of millions of people, and carry with them the most grave economic and social consequences. They also cost lives. Hence, the concern here is one of transparency, and it is unknown if this new ‘bio-intelligence’ agency will be engaging with independent scientists, or will it merely collate data and liase with government-appoint science advisors.

It seems odd to be blending the civil service and signals intelligence with the science departments. From a political and bureaucratic point of view, it’s certainly convenient for politicians to have yet another compartment to whom they can ‘pass the buck’ and use plausible deniability for obfuscation purposes.

If nothing else, it gives Ministers yet another panel of ‘experts’ to defer to – the familiar illusion of impressive depth and deep considerations supposedly informing the Ministers’ final assessments – when in reality, it just becomes more convoluted. Drowning in unaccountable bureaucracy. That’s where the epic mistakes are usual made.

Just as with the disastrous War on Terror, there is a serious danger that an entirely new division of security state technocracy will inevitably become a money sink, operating in its own bubble within an already knotted civil service, and propelled by endless feedback loops – creating more problems than were there to begin with.

It’s important to point out that such historic and sweeping changes in government can only be achieved amid a climate of fear. Since the beginning of this crisis, the mainstream media have been dedicated to delivering that fear.

During the War on Terror, the media scooped up whatever government and the intelligence community were serving, and just ran with it. Without them, the government could never have realised any of its newfound powers. It’s the same now with COVID.

You need only to replace the anti-terror mavens in intelligence community with The Science committees. This is precisely ‘the intellectual artillery’ of government joined-up with the media, which Spengler warned about almost a century ago in his treatise, The Decline of the West.

Make no mistake about it – freedom and democracy are under attack from a new and revitalised, COVID-inspired security industrial complex.

Judging by the lack of tenacity by media in being willing to hold any of the Five Eyes government to account for their horrendous performances thus far, it seems unlikely that the media will challenge this new bio-security arm that much.

One can only hope the penny drops much sooner with this leviathan, than it has with previous security state paradigm shifts.

Author Patrick Henningsen is an American writer and global affairs analyst and founder of independent news and analysis site 21st Century Wire, and is host of the SUNDAY WIRE weekly radio show broadcast globally over the Alternate Current Radio Network (ACR). He has written for a number of international publications and has done extensive on-the-ground reporting in the Middle East including work in Syria and Iraq.