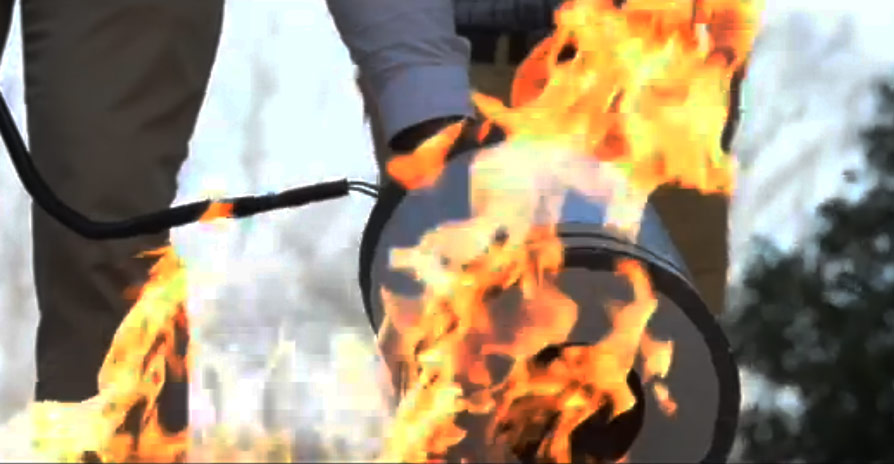 Fire alarms ring loud enough to awake us from our sleep when fires occur. What if instead of that annoying ear piercing sound, another frequency is used and not as loud so that fire is put out at its earliest stage possible?

It’s here now, or is it here all along but the government don’t want us to realize that sound can be used for other purpose.

It is, in fact, all about that bass

In the near future, putting out grease fires in the kitchen might be as easy as turning up the music, thanks to engineering students Viet Tran and Seth Robertson at George Mason University. The students just unveiled a 20-pound backpack prototype that blasts out flames using low-frequency sound waves.

The students used their own money to fund their project, and had an uphill battle from the start–including searing skepticism from both classmates and faculty. “My initial impression was that it wouldn’t work,” engineering professor Brian Mark said in a press release. “Some students take the safe path, but Viet and Seth took the higher-risk option.”

They knew of the high risk because DARPA has toyed with sound-based fire extinguishers for years. Those previous experiments showed that sound can disrupt flames by changing air velocity and vaporizing fuel. This spreads out the fire, lowers its temperature, and shuts off combustion. But DARPA’s project and others like it never really got off the ground; no one could figure out how to make the idea compact and useful.

Robertson and Tran have solved at least part of that puzzle and patented their technology. They hope that, in the short term, it could become a tool for small flare-ups, such as those in a kitchen. But they’d ultimately like to see versions of their invention extinguishing building and forest fires, possibly even using drones.

Drones putting out fires with sound? We can’t wait for the future.

Video: DARPA Device Puts Out a Fire With Blast of Sound

Applying physics to put out a fire, as opposed to chemistry, is an idea DARPA has been eyeing for a while, and it might lead to military devices that can better snuff out fires in enclosed places. Now they have demonstrated a new device in action.

In the video, two speakers are placed on either side of a fuel source. The sound increases air velocity, which disrupts the flame. It also causes higher fuel vaporization, which increases the flame’s area while dropping its temperature. That thinning causes a problem in the combustion process.

It looks like an interesting project, but even DARPA admits they aren’t sure how they’ll use it. To make it worthwhile, it would have to operate on a much larger scale. They’re hoping instead that the project will inspire other ideas in the field, so soak in the video in case it’s the last you see of the technique.