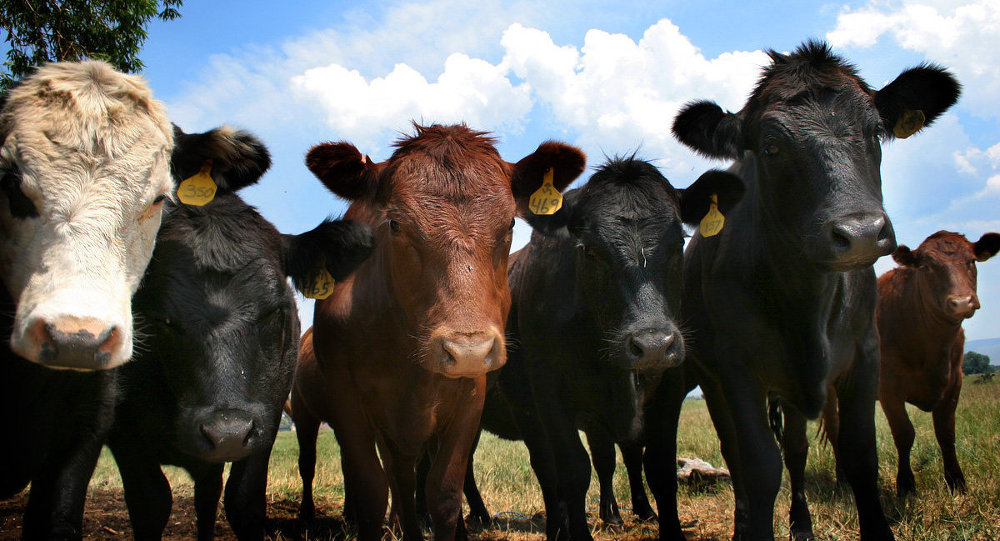 Antibiotic-resistant genes, that evolved in the crowded atmosphere of Texas commercial cattle ranches, have gone airborne and are now capable of “travelling for long distances.”

Researchers at Texas Tech University studied the particulate matter blown up over the Texas Panhandle and South Plains from the large feedlots where 5 million beef cattle are raised for slaughter yearly.

They found that air downwind from the feedlots contained significantly more antibiotic-resistant bacteria DNA that air upwind, they concluded in their paper published in Environmental Health Perspectives.

“This is the first test to open our eyes to the fact that we could be breathing these things,” Phil Smith, an environmental toxicologist at Texas Tech, told the Texas Tribune.

The scientists are concerned that once the airborne bacteria with antibiotic-resistant DNA make their final touchdown, they will transfer that resistance to other bacteria in their new environment.

So-called superbugs were previously known to be transmitted to humans by contaminated meat or water.

Researchers chose to study feedlots because they hoped the high concentration of antibiotics found there would give them insight into how antibiotic resistance develops and spreads. Antibiotics are used in the densely populated feedlots to treat infections but also in regular feed as a preventive measure and to promote growth. Around  80% of antibiotics sold in the US are used on livestock.

A recent study predicted that, worldwide, antibiotic use among livestock is expected to rise by 67% by 2030. Currently China is the heaviest user of antibiotics in livestock, with the US coming in second.

@Rich_893 EU US India China Brazil dark red on the map of antibiotic use in livestock (…and superbugs areas) pic.twitter.com/Zc6ykS6KEN

The cattle excrete large amounts of antibodies in their fecal matter, which dries, then gets picked up on the wind as dust. As much as 46,000 pounds of particulate matter containing antibiotic-resistant DNA may be released into the air over Colorado, Kansas, Nebraska, Oklahoma and Texas every day, the researchers estimate.

“It Made Me Not Want to Breathe”

The scientists set up mesh screens in various locations both upwind and downwind of feedlots, collected the material being blown in the air and analyzed it for the presence of antibiotic resistant DNA.

“The ‘aha’ moment came when we saw how much more prevalent resistant sequences were downwind than upwind,” Greg Mayer, a molecular biologist at Texas Tech told the Tribune. “It was not just higher in some of them – it was 4,000 percent more. It made me not want to breathe.”

Annually, two million Americans contract a superbug that doesn’t respond to traditional antibiotics, and about 23,000 end up dying. The study may confirm a new pathway to infection, potentially expanding the reach of an outbreak

Antibiotic-resistant bacteria in our livestock & enviros by @aetiology http://t.co/mAuodZxh7x img by me! #sciart pic.twitter.com/CPaFCEM6Vg

Despite criticism of the regular use of antibiotics in livestock, representatives of the cattle industry continue to defend their use and have called the researchers’ concerns overblown.

“The judicious use of antibiotics as we are using them today has very little risk to human health,” Dr. Sam Ives, a veterinarian working with the Texas Cattle Feeders Association told the Tribune. “My children work with me in the feedlot; my wife works with me. Am I concerned for their safety? No, I’m not.” The White House is, however, concerned about superbugs, and recently announced a plan to find ways to reduce the risk of antibiotic-resistant bacteria. The plan asked Congress for double funding for research in the area to $1.2 billion dollars, some of which would go to creating a new generation of antibiotics.

The plan calls on the agricultural industry and relevant government agencies  “to advance appropriate use of antibiotics in food animals,” but stops short of mandating limits or reductions.  Rep. Louise Slaughter (D-N.Y) told Politico she doubted the plan would be aggressive enough to be effective.

“I’ve said to people, ‘Right now your government is not going to protect you,'” said Rep. Louise Slaughter (D-N.Y.). “They’re about 10 years behind.”

Over time, any parasite, “superbugs” or not, could become resistant to all drugs but not with electric antibiotics.