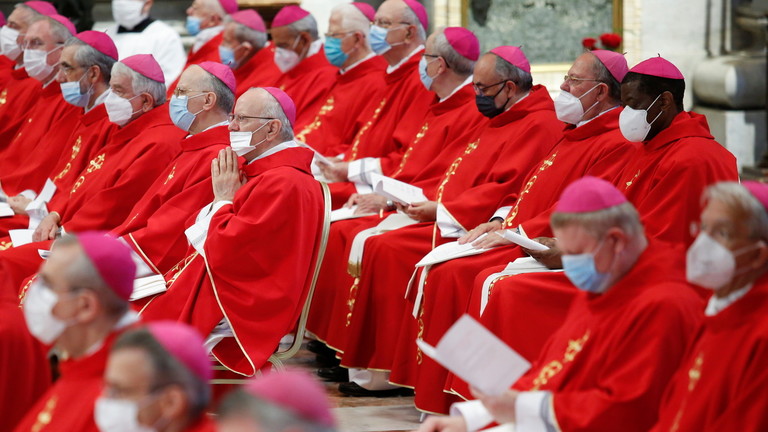 The official bioethics academy of the Catholic Church has come forward alongside a host of global medical associations to demand an end to the “myths and disinformation” interfering with the fight against Covid-19.

The Pontifical Council of Life (VPCL) and several international physicians’ groups spoke with reporters on Friday in what was described as an “all-out effort” to set straight the disinformation surrounding the vaccine’s place in religious doctrine, insisting the pharmaceutical mixture was not only safe and effective but also ethical under the Catholic faith.

While acknowledging that some reluctance to take the jab in “disadvantaged communities” was linked to previous “breaches of trust in medical research” and overall “suspicion” of pharma firms, Friday’s joint statement said a “more pernicious form” of vaccine hesitancy was fueled by “unfounded and misleading claims and myths” and amplified on social media.

“Considered one of the greatest achievements of modern medicine, vaccines play a vital role in the prevention of infectious diseases,” they said.

The groups noted the problem becomes even more complex given the vaccine skepticism within many religious groups, and even the medical community, calling for a united front against disinformation among spiritual leaders and healthcare professionals.

The groups also reiterated the Vatican’s message that all nations should have the same access to vaccines, arguing that rich and poor countries should be able to obtain the same level of care. Pointing to what they called “vaccine nationalism,” they condemned wealthier countries for snapping up as many doses as possible while leaving poorer countries “at a disadvantage” due to a lack of funds or insufficient production capacity.

However, some attending the virtual event complained that groups concerned with vaccine safety, including conservative and Catholic organizations, were not invited, noting that there were no skeptics among the speakers. The organizers shut down any such concerns, however, “strongly rejecting” any doubt in the vaccines’ safety, the Associated Press reported.

The head of international affairs for the German Medical Association, Dr. Ramin Parsa-Parsi, spoke disparagingly of skeptics, implying their concerns are at odds with the science.

“We are physicians. We represent physicians. And we are bound to science and to evidence-based medicine,” he said.

Those who oppose vaccination on religious grounds have cited the use of cells from fetuses aborted decades ago in the development of immunizations, including in those aimed to combat Covid-19. In February, the Archdiocese of New Orleans denounced the Johnson & Johnson jab as “morally compromised” due to its use of fetal cells. The US Conference of Catholic Bishops, meanwhile, gave a pass to shots produced by Pfizer and Moderna, deeming their link to abortion too tangential, but urged Catholics to avoid the AstraZeneca and Johnson & Johnson jabs if possible.

The Congregation for the Doctrine of the Faith – the oldest among the nine congregations of the Roman Curia – declared in December that, so long as no other option is available, it is morally acceptable to receive vaccines based on cells taken from aborted fetuses. And while the Pontifical Academy for Life has argued there is a “moral responsibility” to vaccinate, it did not go so far as to mandate the jab for all Catholics. That was left to Pope Francis, who denounced any apprehension about vaccines as “suicidal denial.”

How many times did we catch the likes of Fauci and Ferguson lying to their teeth, and changing their tunes since the whole thing began?

How did PCR test inventor Dr. Karry Mullins died 3 months prior to Event 201, as hosted by Gates Foundation and Johns Hopkins, which warned that most governments were not prepared to deal with an incoming pandemic that happened 3 months later?

The PCR test continues to be the basis for counting COVID19 infections, yet it was not designed for diagnostic purposes ever. What it does is to confirm the presence of fragments of the virus purposely put into the vials during the production of vaccines.

What that means is that, there is already prior knowledge that they are putting a volume of a certain type of virus in to that tiny glass container, and the PCR test need only look for a small part of that virus by amplifying its size up to a point of detection. The cycle threshold [Ct] of amplification is where the manipulation could be executed to bloat the numbers of infection.

More than a year later, the WHO recommended that a retesting is necessary since Ct of 35 and above are invalid. The media did not cover this on primetime. Nor, does the people know about the original intent for the PCR test.

Does this mean that the Vatican supports all those lies and deception that have nothing to do with science at all?

Whatever the case, the cozy relationship between the Church of Satan and Big Pharma is not surprising at all. It’s what the church is all about since ancient times.

The word Church comes from the Greek goddess Circe. According to the ancient Greeks, supersexy Circe could transform men into swine after they are made to drink from the poison cup. This art of sorcery is known as pharmakeia.

COVID19 is the 21st Century version of the Nazi Holocaust, or burnt offering, that the church was evidently supporting. When asked about the silence of the church during Hitler’s invasion across Europe, the Church of Satan offered no explanation at all. Explaining that the use of fetal tissue is “not immoral at all,” is already an improvement.

How then can one trust the pedophiles in matters of morality, or the priests about scientific basis of mass vaccination?

Mixing toxic chemicals and microbes are all covered in Advanced Alchemy of their so-called occult science. In fact, the elite are employing blood transfusions from kidnapped children to stay alive.

Even the entire medical community has an inherent conflict of interest in everyone’s health, as it is in its best interest that people get sicker by the day.

Lastly, the church’s active participation in the global debate about the validity of vaccination as a science, or the morality of using fetal tissue in vaccine production, underscores the desperate situation that the entire Deep State is in right now.

We can only press on even harder in spreading the Whole Truth, now that the beast is panicky…