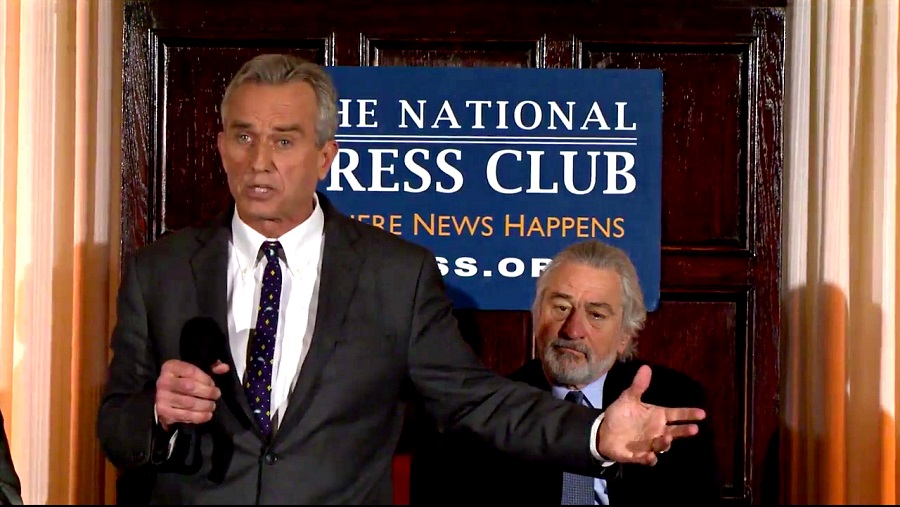 A few days ago, both Robert de Niro and Robert F. Kennedy Jr. made a high-profile anti-mercury in vaccine offensive by offering $100,000 reward to any doctor who can prove that the mercury level in vaccines is safe.

Obviously, this is just a propaganda offensive to gain the attention of the public, as the two may already know that there will be no takers to the challenge, because the next step would be to ask that doctor to inject the mercury laden vaccine into his own son, or himself.

Most important of all is: vaccination is not just about mercury, aluminum, “attenuated” live viruses, etc.

The following quote is taken directly from RxList.com, the so-called “Internet Drug Index,” proving that flu vaccines contained added mercury in the form of thimerosal:

Nevertheless, this action from De Niro and Kennedy is a very high risk undertaking considering the forces that are behind the industry.

According to this report (and as we previously reported on), barely a fortnight prior to his taking the oath of office, then President-elect Trump shocked the entire US mainstream media with a direct assault on the vaccine-autism link conspiracy by his appointment of Robert F. Kennedy Jr. [the son and nephew of the slain American leaders Senator Robert F. Kennedy Sr. and President John F. Kennedy] to become his Chairman of the Golden Vaccine Safety Task Force—and who (Kennedy) was already reviled by these elite propagandists after his publishing a manifesto titled MERCURY & VACCINES linking childhood vaccines with autism.

After being sworn into office, this report continues, Robert F. Kennedy Jr. had scheduled a 24 January meeting at the White House where he intended to introduce President Trump to Dan Olmsted—who as a United Press International (UPI) investigative reporter exposed a massive cover-up of the US Army invented malaria drug Lariam that, literally, made its users “lose their minds” and turn them into murder lust killers.

Following Dan Olmsted’s exposing the massive US Army cover-up of their “murderous” malaria drug Lariam, this report details, this UPI investigative reporter then turned his skills towards the mysterious rise of a new 20th Century childhood disease called autism—and that in his first article about he wrote:

“Where are the autistic Amish? Here in Lancaster County, heart of Pennsylvania Dutch country, there should be well over 100 with some form of the disorder.

I have come here to find them, but so far my mission has failed, and the very few I have identified raise some very interesting questions about some widely held views on autism.

The mainstream scientific consensus says autism is a complex genetic disorder, one that has been around for millennia at roughly the same prevalence. That prevalence is now considered to be 1 in every 166 children born in the United States.

Applying that model to Lancaster County, there ought to be 130 Amish men, women and children here with Autism Spectrum Disorder.

Typically, half would harbor milder variants such as Asperger’s Disorder or the catch-all Pervasive Development Disorder, Not Otherwise Specified — PDD-NOS for short.

So let’s drop those from our calculation, even though “mild” is a relative term when it comes to autism.

That means upwards of 50 Amish people of all ages should be living in Lancaster County with full-syndrome autism, the “classic autism” first described in 1943 by child psychiatrist Leo Kanner at Johns Hopkins University.

The full-syndrome disorder is hard to miss, characterized by “markedly abnormal or impaired development in social interaction and communication and a markedly restricted repertoire of activities and interests,” according to the Diagnostic and Statistical Manual of Mental Disorders.

Why bother looking for them among the Amish? Because they could hold clues to the cause of autism.”

Important to note about Dan Olmsted’s UPI research articles on autism, this report explains, is that they are some of the most feared in the United States—so much so that the former Emmy award winning CBS News journalist-producer, Sharyl Attkisson, whom Olmsted had worked with on a television programme about the US Army’s Lariam cover-up, has personally archived them—and when Attkisson herself asked officials from the Centers for Disease Control (CDC) about the lack of autism in the unvaccinated Amish, they outrageously told her it was because these primitive religious farmers didn’t use electricity.

And so feared, in fact, are Dan Olmsted’s UPI research articles on autism, this report notes, Sharyl Attkisson had to archive them on a server the island kingdom of Tonga having them archived under the top-level country domain code of .to as all US search engines are programmed to delete them if found on .com or .org websites.

Not just were Dan Olmsted’s articles about autism feared either, this report continues, but, also, his very person—and as evidenced by just weeks prior to his own death, he began receiving anonymous warnings threatening his life if he dared to meet with President Trump—soon after followed by the mysterious death of his sister’s ex-husband—and that on the day prior to meeting Trump (as if he knew what was going to happen) he cryptically wrote his own death message ending it with these words:

“A P.S. for 2017: If you say what you think and stick to your guns and you are right, like my pediatrician and many of you who read AOA every week, sometimes even the president of the United States will come around to agreeing with you.”

Unfortunately, however, this report grimly records, the day prior to Dan Olmsted meeting with President Trump and being able to present his vaccine-autism link evidence, he was discovered dead in his Falls Church, Virginia, home—with officials declaring his death to be of “natural causes” without an autopsy, and then cremating his body within 7 hours—and not one single American mainstream media news organization bothering to even write about his remarkable career in the service of mankind and the thousands of lives he saved.

… Dan Olmstead’s death is directly linked to the CIA due to this spy agencies links to giant pharmaceutical companies that he was investigating prior to his death in order to prove that autism was just the “tip of the iceberg” of a mass conspiracy to control peoples’ minds, and bodies, with drugs in order to keep them docile, or like the Lariam drug did, make them murderous.

The use of vaccines has been rendered obsolete when electricity was discovered. In any pandemic, a user could just switch on a device that could deliver safe electrical signals to neutralize known and unknown viral infections. There’s no need for an expert, or medical drug whatsoever. Electricity could neutralize them all!

In short, there was never any need for vaccines in the first place.

But our economic system requires itself to manufacture the need, and sell products to supposedly satisfy that need. If that’s the case, then the manufactured need will be defeated, and it makes no business sense at all.

That’s the reason why vaccines must never be allowed to cure anything, but would rather support the creation of more needs for further administration of medical fake solutions, in order to sustain the system.

2 thoughts on “Will Kennedy & De Niro Defeat the Vaccine Industry with Indirect Offensives?”