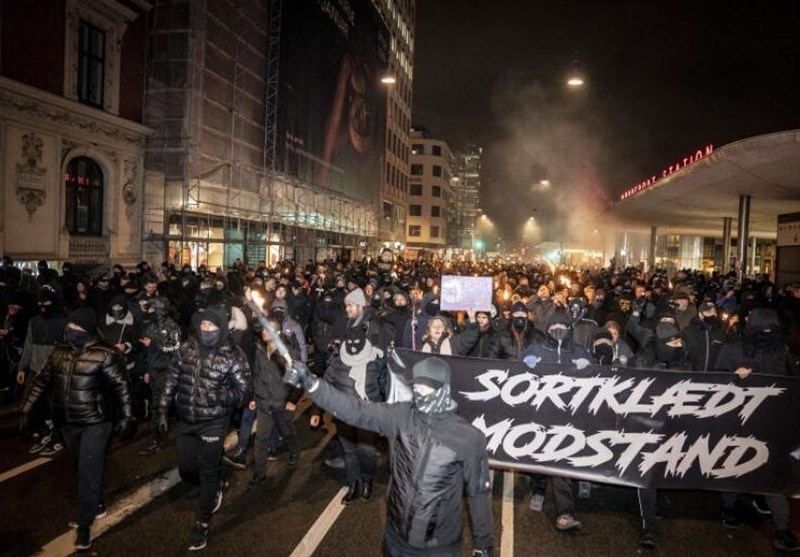 People opposing the Danish government’s response to the Covid-19 pandemic marched through the capital in a fresh protest on Saturday. Unlike some previous events, this week’s gathering remained peaceful and prompted no arrests.

The protest was organized by the ‘Men in Black’ group, who are unhappy with Denmark’s partial lockdown and the looming rollout of a digital system which will track vaccinations and issue certificates confirming people’s inoculation status. The passports are to be used for international travel and potentially to give access to public venues in Denmark itself.

On Saturday night, hundreds of demonstrators walked through central Copenhagen in front of the parliament building, carrying torches and flares, chanting slogans and playing music which included their unofficial anthem, a version of Italian partisan classic ‘Bella Ciao’. They also carried an effigy of Prime Minister Mette Frederiksen made to look like North Korean leader Kim Jong-un – but unlike the model of the PM seen two weeks ago, they didn’t burn it.

The burning stunt that happened on January 23 caused much controversy, as on that occasion the effigy was wearing a sign stating that the prime minister deserved to be killed. Five people were arrested during that event. Men in Black allies distanced themselves from the action and lamented that it drew attention away from their core message.

The protesters accuse Frederiksen of imposing hasty and unnecessary restrictions and forcing people into taking the vaccine. Vaccination is not compulsory in Denmark, but opponents say it could as well be mandated if the alternative is to be excluded from all social life. – RT.com