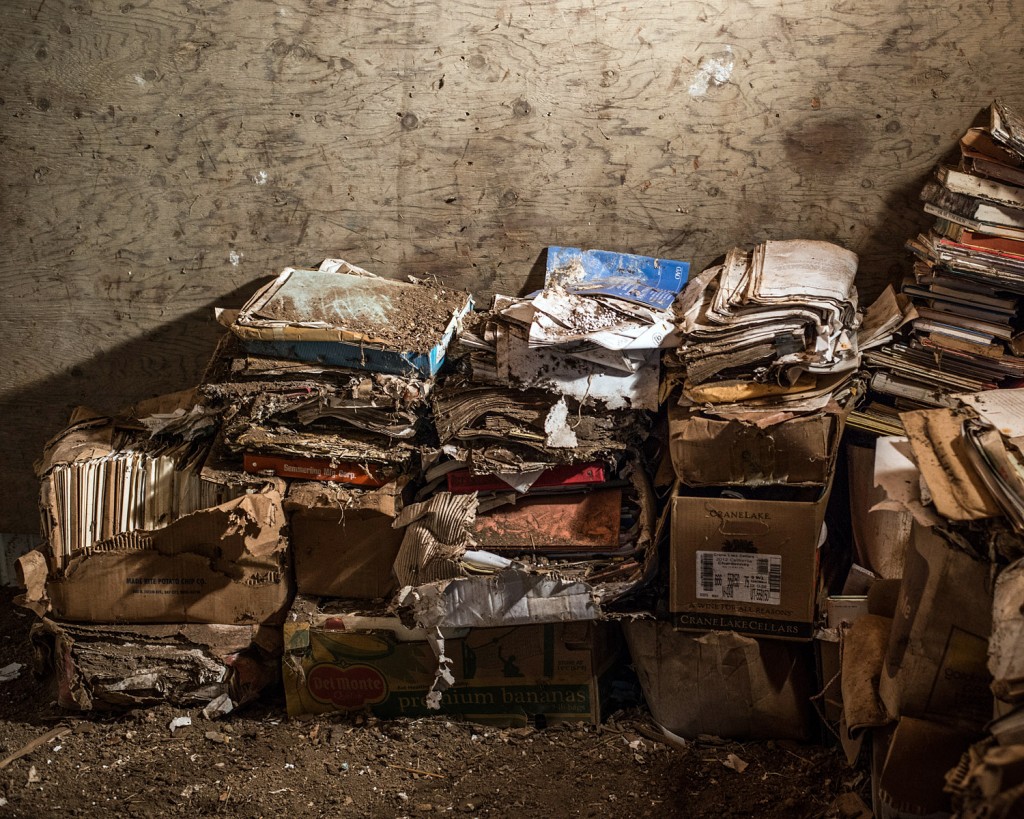 For decades, some of the dirtiest, darkest secrets of the chemical industry have been kept in Carol Van Strum’s barn. Creaky, damp, and prowled by the occasional black bear, the listing, 80-year-old structure in rural Oregon housed more than 100,000 pages of documents obtained through legal discovery in lawsuits against Dow, Monsanto, the Environmental Protection Agency, the U.S. Forest Service, the Air Force, and pulp and paper companies, among others.

As of today, those documents and others that have been collected by environmental activists will be publicly available through a project called the Poison Papers. Together, the library contains more than 200,000 pages of information and “lays out a 40-year history of deceit and collusion involving the chemical industry and the regulatory agencies that were supposed to be protecting human health and the environment,” said Peter von Stackelberg, a journalist who along with the Center for Media and Democracy and the Bioscience Resource Project helped put the collection online.

Van Strum didn’t set out to be the repository for the people’s pushback against the chemical industry. She moved to a house in the Siuslaw National Forest in 1974 to live a simple life. But soon after she arrived, she realized the Forest Service was spraying her area with an herbicide called 2,4,5-T — on one occasion, directly dousing her four children with it as they fished by the river.

The chemical was one of two active ingredients in Agent Orange, which the U.S. military had stopped using in Vietnam after public outcry about the fact that it caused cancer, birth defects, and serious harms to people, animals, and the environment. But in the U.S., the Forest Service continued to use both 2,4,5-T and the other herbicide in Agent Orange, 2,4-D, to kill weeds. (Timber was — and in some places still is — harvested from the national forest and sold.) Between 1972 and 1977, the Forest Service sprayed 20,000 pounds of 2,4,5-T in the 1,600-square-mile area that included Van Strum’s house and the nearby town of Alsea.

As in Vietnam, the chemicals hurt people and animals in Oregon, as well as the plants that were their target. Immediately after they were sprayed, Van Strum’s children developed nosebleeds, bloody diarrhea, and headaches, and many of their neighbors fell sick, too. Several women who lived in the area had miscarriages shortly after incidents of spraying. Locals described finding animals that had died or had bizarre deformities — ducks with backward-facing feet, birds with misshapen beaks, and blinded elk; cats and dogs that had been exposed began bleeding from their eyes and ears. At a community meeting, residents decided to write to the Forest Service detailing the effects of the spraying they had witnessed.

“We thought that if they knew what had happened to us, they wouldn’t do it anymore,” Van Strum said recently, before erupting into one of the many bursts of laughter that punctuate her conversation. We were sitting not far from the river where her children played more than 40 years ago, and her property remained much as it was back when the Forest Service first sprayed them with the herbicide. A mountain covered with alder and maple trees rose up across from her home, just as it did then, and the same monkey puzzle tree that was there when she moved in still shaded her dirt driveway.

But Van Strum, now 76, is much changed from the young woman who politely asked that the federal agency stop spraying many years ago. After the Forest Service refused their request to stop using the herbicides, she and her neighbors filed a suit that led to a temporary ban on 2,4,5-T in their area in 1977 and, ultimately, to a total stop to the use of the chemical in 1983.

For Van Strum, the suit was also the beginning of lifetime of battling the chemical industry. The lawyer who had taken their case offered a reduced fee in exchange for Van Strum’s unpaid research assistance. And she found she had a knack for poring over and parsing documents and keeping track of huge volumes of information. Van Strum provided guidance to others filing suit over spraying in national forests and helped filed another case that pointed out that the EPA’s registration of 2,4-D and other pesticides was based on fraudulent data from a company called Industrial Bio-Test Laboratories. That case led to a decision, in 1983, to stop all aerial herbicide spraying by the Forest Service.

“We didn’t think of ourselves as environmentalists, that wasn’t even a word back then,” Van Strum said. “We just didn’t want to be poisoned.”

Still, Van Strum soon found herself helping with a string of suits filed by people who had been hurt by pesticides and other chemicals. “People would call up and say, ‘Do you have such and such?’ And I’d go clawing through my boxes,” said Van Strum, who often wound up acquiring new documents through these requests — and storing those, too, in her barn.

Along the way, she amassed disturbing evidence about the dangers of industrial chemicals — and the practices of the companies that make them. Two documents, for instance, detailed experiments that Dow contracted a University of Pennsylvania dermatologist to conduct on prisoners in the 1960s to show the effects of TCDD, a particularly toxic contaminant found in 2,4,5-T. Another document, from 1985, showed that Monsanto had sold a chemical that was tainted with TCDD to the makers of Lysol, who, apparently unaware of its toxicity, used it as an ingredient in their disinfectant spray for 23 years. Yet another, from 1990, detailed the EPA policy of allowing the use of hazardous waste as inert ingredients in pesticides and other products under certain circumstances.

There were limits to what Van Strum could prove through her persistent data collection. The EPA had undertaken a study of the relationship between herbicide exposure and miscarriages and had taken tissue samples from water, animals, a miscarried fetus, and a baby born without a brain in the area. The EPA never released the full results of the “Alsea study,” as it was called, and insisted it had lost many of them. But a lab chemist provided Van Strum with what he said was the analysis of the test results he had been hired to do for the EPA, which showed the samples from water, various animals, and “products of conception” were significantly contaminated with TCDD.

When confronted, the EPA claimed there had been a mix-up and that the samples were from another area. Van Strum filed a Freedom of Information Act request for the results and, for years, battled in court to get to the bottom of what happened. Though the EPA provided more than 34,000 pages in response to her request (which Van Strum carefully numbered and stored in her barn), the agency never released all the results of the study or fully explained what had happened to them or where the contaminated samples had been taken. And eventually, Van Strum gave up. The EPA declined to comment for this story.

She had to make peace with not fully understanding a personal tragedy, too. In 1977, her house burned to the ground and her four children died in the fire. Firefighters who came to the scene said the fact that the whole house had burned so quickly pointed to the possibility of arson. But an investigation of the causes of the fire was never completed.

Van Strum suspected some of her opponents might have set the fire. It was a time of intense conflict between local activists and employees of timber companies, chemical manufacturers, and government agencies over the spraying of herbicides. A group of angry residents in the area near Van Strum’s home had destroyed a Forest Service helicopter that had been used for spraying. And, on one occasion, Van Strum had come home to find some of the defenders of the herbicides she was attacking in court on her property.

“I’ve accepted that I’ll never really know” what happened, said Van Strum, who never rebuilt her house and now lives in an outbuilding next to the cleared site where it once stood.

But her commitment to the battle against toxic chemicals survived the ordeal. “If it was intentional, it was the worst thing that ever happened to me,” she said. “After that, there was nothing that could make me stop.”

Still, after all these years, Van Strum felt it was time to pass on her collection of documents, some of which pertain to battles that are still being waged, so “others can take up the fight.” And the seeds of many of the fights over chemicals going on today can be tied to the documents that sat in her barn. The Industrial Bio-Test Laboratories scandal is central in litigation over the carcinogenicity of Dow’s Roundup, for instance. And 2,4-D, the other active ingredient in Agent Orange, is still in use.

Meanwhile, private timber companies continue to use both 2,4-D and Roundup widely, though not in the national forest. Van Strum has been part of an effort to ban aerial pesticide spraying in the county, and is speaking on behalf of the local ecosystem in a related lawsuit.

The medical industry is a chemical industry, and is sporting an elaborate façade of evidence-based science and white robes. Yet, behind them is the long list of environmental destructions, deaths and misery.

Just like Big Pharma they are colluding with, they’re not practicing allopathy at all, but sociopathy in thoughts and in deed.

Abomination, that’s what they all are.